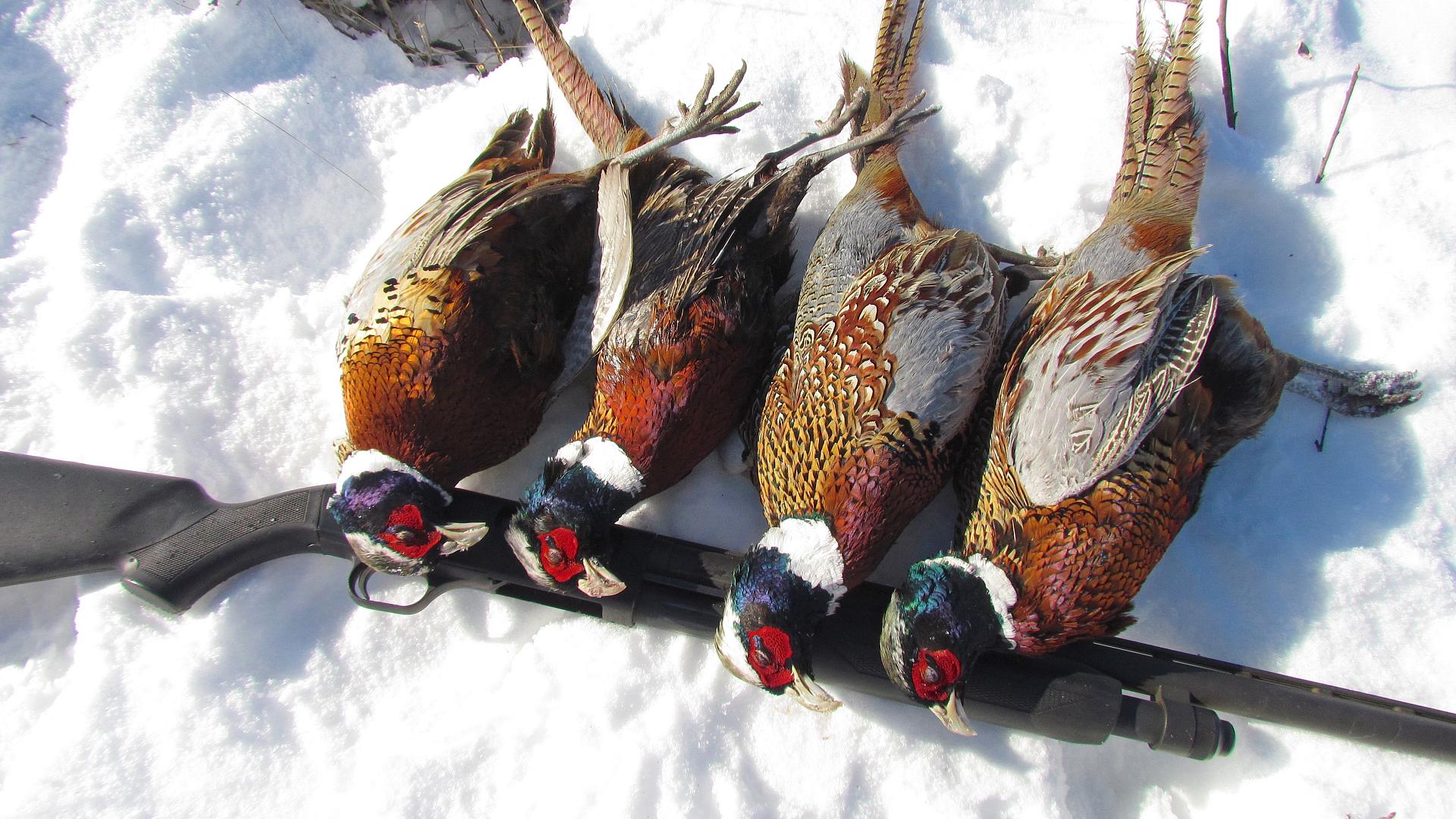 How to hunt for colourful ringnecks before, during and after a snowfall

While most hunters are still busy pursuing big game in November, those who have already filled their tags often have great pheasant-hunting opportunities largely to themselves. The same goes for hunters who only go after upland gamebirds. This is especially true in my home province of Alberta, where some areas offer ringneck hunting well into January, allowing avid bird hunters to stay afield that much longer. And as a bonus, I find the colder it is and the more snow cover there is, the better my chances of late-season success.

There should also be plenty of birds this season, too, thanks to the efforts of the Alberta Conservation Association and its partners. Between September and November this year, they were slated to release 26,000 pheasants at 39 sites across the province (see “Release the birds!” below). If you’re lucky enough to live in an area with late-season ringneck-hunting opportunities—or you’re willing to travel to one—you’re in for a lot of fun and some great table fare this fall and winter. And for those new to this game, here’s what you need to know.

Under normal fall weather conditions, pheasants typically mill about feeding, scratching and even socializing. They can be scattered, and a little harder to hunt, but as the weather cools and the clouds move in, pheasants get on the move and start taking in as much feed as they can. Expect to see a large number of birds before a cold front moves in, making for some of the best shoots of the season.

As with big-game animals prior to a cold front, a pheasant’s instinct is to feed aggressively to prepare for the frosty weather ahead. During these conditions, hunters should concentrate their efforts around high-protein feeding areas, such as grain, pea and cornfields. Not only are these great feeding sites for pheasants, but they also provide enough moisture from rain or morning dew for the birds to quench their thirst. When pheasants congregate in areas with a food source, cover and water, they rarely venture far as the frigid weather arrives.

When Mother Nature throws a winter fit, pheasants hold tight to thick cover for protection from the elements, all the while conserving energy and living off their reserves—maintaining body heat is of the utmost importance to them when the weather turns bad. During this time, they won’t move unless they absolutely have to, and it’s not uncommon for them to hold up for days on end.

With the pheasants hesitant to fly under such conditions, it can make for a challenging hunt. Indeed, you or your dog can literally stand on top of a pheasant before it takes to the safety of the sky. I’ve found pheasants holding anywhere from the bases of trees to thick brush. I’ve even found them holding in and around agricultural equipment. Wherever they can get protection from the elements, you’ll find them.

Bird dogs can be particularly helpful when there’s heavy or wet snow, as they can get deeper into thicker cover to force the birds out. However, you need to be even more mindful of where your dog is before taking a shot. Because the pheasants will be reluctant to fly until the last minute, shots are often within close range and close to the ground. Two seasons ago, for example, I was hunting with a friend in December under cold winter-weather conditions when his black Lab grabbed a reluctant rooster just 25 feet in front of my friend. If the pheasant had flushed at the last second instead and my friend had taken a shot, he most certainly would have hit his dog.

On that note, if you’re unable to take a shot or you miss after a bird flushes from cover, pay close attention to its flight path. While these birds may have gorged themselves in anticipation of the cold front moving in, they have no idea how long the bad weather will last. So, to conserve energy until the weather breaks, they typically don’t spend too much time flying in the cold, travelling only 30 or 40 metres before landing and heading back into cover—and that gives you a second shooting opportunity.

After a storm or snowy spell, the only thing on a pheasant’s mind is food. They need to replenish their reserves, so they head right back to those high-protein areas to aggressively feed. And in doing so, they often drop their guard, allowing you to get in close for a shot before they flush.

These are excellent hunting opportunities for novice or first-time wingshooters, as the roosters will also be easy to spot against the white background of the freshly fallen snow, their beautiful colours standing out like a neon sign. It’s not uncommon, in fact, to see pheasants standing on top of the new snow, scoping out their frosty surroundings. With the snow working to the hunter’s advantage, this is also a great time for pheasant hunters who don’t have the help of a bird dog to head afield.

Once the birds get a belly full of protein, they’ll rest and sun themselves, usually right at their food source. This resting-feeding pattern should last for a few days before the pheasants fall back into their regular routines, giving you yet another chance to find them and fill your game bag.

Resident and non-resident bird hunters alike have some amazing pheasant-hunting opportunities in Alberta, and for that, much of the credit goes to the Alberta Conservation Association (ACA), which administers the Provincial Pheasant Release Program. And the ACA is continuously working to expand the program in an effort to firmly establish Alberta as a pheasant hunter’s paradise. It also works with landowners, counties and other conservation groups through the program to conserve crucial ringneck habitat.

The association is also striving to make pheasant hunting a better experience for all bird hunters by no longer revealing in advance the time and location of the releases. This practice not only helps to ensure fair chase, it also allows the pheasants more time to scatter throughout the landscape without hindrance from hunting pressure. All of the ACA release sites are located in ideal ringneck habitat, and because of the release program, the pheasant population in the south of the province, in particular, continues to grow.

Learn more about the Alberta Conservation Association and its pheasant release program at www.ab-conservation.com.