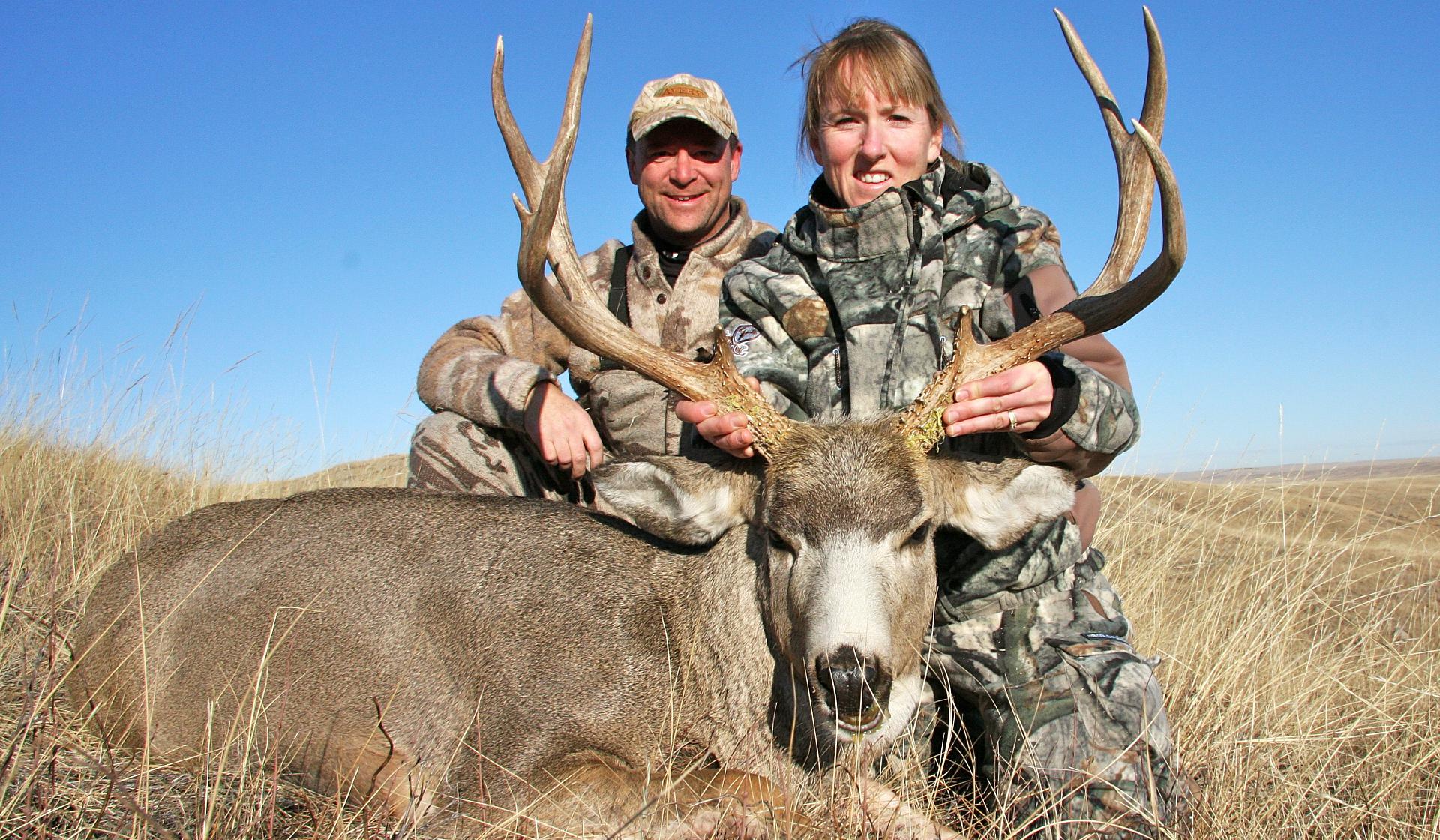 How to hunt open-country mule deer with a muzzleloader

How one couple succeeded in their quest for a blackpowder double

Crouching behind a large boulder, I watched intently as two mule deer crested a distant ridge. More than 400 yards away, they were far outside my comfort zone for shooting a muzzleloader. But when the bucks eventually bedded down in some sparse willows at the bottom of a coulee, I smiled. They were in the perfect spot for a stalk.

Well before daybreak, my wife, Heather, and I had parted ways to hunt different drainages. We’d both drawn coveted mulie buck tags in one of Alberta’s most valued prairie grassland wildlife management units. With only three days to hunt, our odds would vastly improve by still-hunting different ground.

Pursuing mule deer in open habitat is challenging—these animals survive and thrive by vanishing in the most meagre of scrubby cover. With their oversized ears, acute sense of smell and incredible eyesight, mulies are well adapted to staying alert in the shallow valleys and open hillsides of the grasslands. And it’s the very challenge of sneaking up on mule deer that draws bowhunters and muzzleloaders alike to this terrain.

If you’ve hunted prairie mule deer with primitive weapons, you know it demands attention to detail, carefully planning and a little luck. Here’s how Heather and I achieved our blackpowder double, and how you can also have a successful hunt.

Patience and careful calculation paid off on our hunt. We moved slowly and used the wind to our benefit. The biggest mistake most prairie deer hunters make is moving too fast. Mule deer are the reigning champions of hide-and-seek in a landscape with relatively little cover. If they catch your scent or have any inkling that a predator—human or otherwise—is nearby, they vacate in a hurry.

On many occasions, I’ve sat patiently waiting on bedded bucks. But whenever I tried to rush in on them, I got busted and was graced only with a fleeting glimpse of their rumps as they exploded out of the willows. With mule deer, success comes to those who wait—and wait is precisely what Heather and I did with the two bucks I’d put to bed in the bottom of the coulee.

Once we met up again after still-hunting the separate drainages, Heather and I decided at least one of the bucks was worth a closer look. The open Prairie is renowned for its incessant winds. On that day there was a stiff northwest breeze, so we circled and approached from the southeast and carefully positioned ourselves on a hillside 70 yards above the bedded bucks.

Sitting motionless, we were afforded the opportunity to evaluate both deer. Branches obscured most of their body mass and antlers, but every once in a while they turned their heads, allowing us a glimpse of their antlers. One was respectable with a basic 160-class main frame and a nice drop-tine coming down from the right main beam. Given the opportunity, I wanted Heather to take him, but she figured I should have the shot because I’d found him. I’m a sucker for non-typical points, so the decision was easy. If he stood up, I’d make it happen.

After two hours we were growing impatient, but then he stirred. Perseverance paid off and we were in the ideal position. As the drop-tine buck stood, stretched and slowly began to move, I shouldered my 50-calibre, settled the crosshairs and, as soon as the buck stepped into the open, sent the Barnes sabot on its way. With one well-placed shoulder shot, he collapsed instantly.

The most important asset any prairie hunter can have in his or her arsenal is good optics for meticulously scanning long distances. A proven mule deer hunting strategy involves positioning yourself on high ground and thoroughly surveying the surrounding countryside with binoculars or a spotting scope. In late October, the drab landscape’s various shades of brown all blend together, allowing mule deer to easily vanish into the parched prairie landscape.

For this reason, it’s imperative your optics offer excellent image clarity. Equally important is the right configuration for the task at hand. On this hunt, we used Swarovski 10×42 HD binoculars for both extreme distance and closer range viewing.

Another crucial accessory is a rangefinder. Accurately judging distance in this wide-open environment can be tricky. My buck was bedded just a chip shot away, but when it came to Heather’s shot opportunity, having a rangefinder made all the difference in the world. Confirming the 165-yard distance, she was able to send her sabot downrange with absolute confidence. Thankfully, optics manufacturers now make rangefinding binoculars that eliminate the need to carry two different pieces of equipment.

In Alberta, regulations allow for the use of scopes on muzzleloaders. We were both shooting Thompson Center 50-calibre inline rifles, so we mounted glass on them. This is a great asset when it comes to hunting with blackpowder rifles. Traditionally, many muzzleloader hunters opt for something in the 1-6x or even 2-7x range. We believe in having more magnification on our scopes.

Even with great optics, locating mule deer—let alone evaluating and field judging antler size—can be challenging. To narrow down the scope of your search, concentrate on transition zones between available food sources and preferred bedding areas, where the deer are liable to travel.

The terrain we were hunting was typical of prairie grasslands. Mule deer residing in the coulees to the south would move anywhere from one to three kilometres late in the evenings to feed under cover of darkness, then return to their bedding areas at daybreak. Sometimes, they would migrate up over the higher ground where visibility was good, but we learned they typically used more predictable travel corridors.

Most of the deer would migrate under the cover of the drainages, with each coulee having an entrance and exit point that opened up into the bottomland feeding areas. We learned that by moving into those areas in the pre-dawn darkness, then settling in on one of the ridges, we could easily spot deer and plan our hunts.

We also learned these transition zones were laced with sparse cover. Sometimes, deer would bed in the first available patch of sage, but the bigger bucks normally travelled much deeper into the draws, to familiar bedding areas. Extreme caution was required each and every time we rounded a hillside or crested a ridge to make sure we didn’t spook any deer.

Muzzleloader hunting demands you get in close to your prey, even though most of today’s inline blackpowder guns are fully capable of delivering a sabot with sufficient velocity to kill at more than 300 yards. That said, shots past 150 yards are generally deemed to be long range.

Flintlocks are much less accurate than their inline cousins, and they have a slower muzzle velocity. This, in turn, limits downrange accuracy. Many of us consider 50 to 100 yard shots reasonable for this type of muzzleloader.

Back to inline guns, I’ve seen experienced shooters work up their powder loads to effectively shoot past 400 yards. I don’t recommend this for the recreational hunter, but I mention it to demonstrate the potential. In my opinion, most muzzleloader hunters should limit shots to less than 200 yards. The qualifier here is the necessity to understand ballistics and how your particular gun performs.

Heather and I both used a polymer-tipped, 250-grain Barnes TMZ sabot, backed with 150 grains of Pyrodex. At 70 yards, no range estimation is required. You just aim square on the buck’s shoulder and hit the switch. Out past 100 yards, however, bullet drop usually becomes an issue.

With Heather’s deer, at a distance of 165 yards, she knew she had to compensate by aiming 14 inches high. Using a bipod, she gently squeezed the trigger and delivered the sabot directly through the buck’s heart—the animal took just a few short steps, reared up, then collapsed backward. Chalk up this expedient and ethical kill to Heather spending sufficient time at the range, familiarizing herself with her gun and bullet performance, and making sound decisions during the hunt itself.

Rich in biodiversity, Midwest prairie grassland habitats team with wildlife, but they’re also vulnerable. Wild grasslands grow slowly in the extremely arid landscape, and when damaged by vehicles or wildfires, they can take many years to rejuvenate. For these reasons, most ranchers and other land managers ban any form of vehicular traffic—including ATVs—other than on established roads and trails. As a hunter, this means you need a plan for retrieving downed game on foot.

Your options here are limited. You can drag it out by hand, but that’s inefficient and next to impossible if you tip over an animal several kilometres from your truck and at the bottom of a coulee. You can use a game cart—and many do—but again, this can require a lot of extra effort. For us, the most practical way to retrieve our downed deer was to debone them and haul out the meat on our backs. A sturdy backpack with 6,000 to 7,200 cubic inches of space does the trick nicely.

Heather and I do a lot of mountain hunting, so we’re accustomed to carrying heavy loads. On this particular mule deer hunt, I took my buck less than two kilometres from the nearest road, but Heather’s required a bit more effort—it was more than three kilometres across the prairie and down in a coulee. With the two of us sharing the load, however, the job was quick and easy. And the reward twice as good.