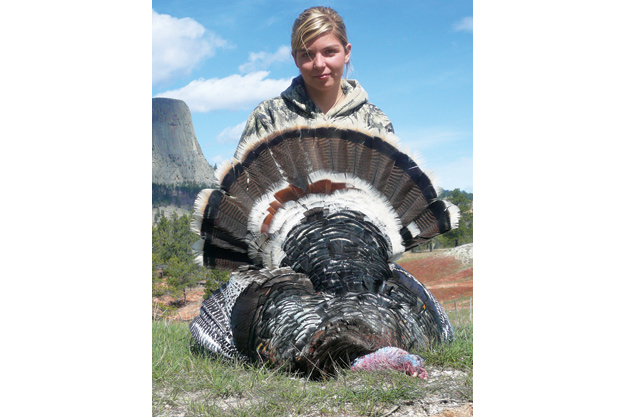 How to hunt turkeys like a World Slam veteran

By her own admission, Bobcaygeon, Ontario’s Desiree Garland is obsessed with hunting, and wild turkeys are her specialty. At 25, she’s the first Canadian woman (and only the fourth Canuck) to complete the National Wild Turkey Federation’s World Slam, harvesting all six turkey subspecies: Eastern, Rio Grande, Merriam’s, Osceola, Gould’s and Ocellated. Having taken trophy toms from Mexico to Ontario, Garland has a few tricks to help other hunters fill their tags.

Scout: “You can’t just wake up the first morning of the season and say, ‘I think I’ll go kill a turkey,’” Garland says. Instead, you must get to know your hunting area before the opener, as well as spend time around the local turkeys. “You’ve really got to listen to your birds and mimic them—an Eastern in Bobcaygeon doesn’t sound the same as an Eastern in other parts of Ontario.”

Call: “There are turkey calls in my glovebox, on my bedside table, in my bathroom—all over my house,” Garland says. Why? There’s no substitute for constantly practising your calls, because nothing ruins a day in the field faster than bad calling. “You’ll call and hear nothing back, then think there are no birds there,” she says. “But there are—you just scared them.” Garland’s go-to is a crystal slate call for its versatility, but she also carries a mouth call, a box call for windy days and a variety of locator calls.

Pattern: Since age 19, Garland has been shooting a Benelli Super Black Eagle II with 3½-inch Federal turkey loads, and a full choke. She decided on this set-up after firing a number of different loads into targets at 50 yards, examining the patterns and counting how many pellets were in the kill zone. Her advice? Know what your gun can do.

Shoot: Bench-shooting has its place, Garland says, but it doesn’t prepare you for actual hunting conditions. To get comfortable with her Benelli, she donned all her gear, including full camo and a laden vest, and shot boxes of shells into a decoy. And to mimic various hunting scenarios, she practised holding her shotgun steady and shooting from different positions. “That way you learn the feel of your equipment, the sounds it makes and what movements you can get away with,” Garland says.

Outsmart: A big part of turkey hunting is to know the bird’s behaviour, and one of Garland’s favourite tactics is to find a boss hen and, well, tick her off. “Every time she starts putting and clucking and cutting, you’ve got to cut her off,” she says. “If you get her mad she’ll run in, and where the dominant hen goes, the biggest tom will follow. There’s nothing better than a live decoy.” And Garland should know, having taken some big gobblers this way, including a 21-pound Osceola bruiser.