How to scout for new western hunting grounds—in spring!

For several years, I drove past the same mountain range on my way to work in northern Alberta and dreamed of hunting it. The only problem was, I worked long shifts all through the summer and never had a chance to properly scout the area before hunting season began.

Not willing to give up on the idea, I finally decided do my research in the spring instead to learn about the area and its game, and its accessibility for hunting. Thanks to my efforts, the following fall I harvested a mature white-tailed buck on just my fourth day of hunting (below).

Have you ever repeatedly passed the same landscape and thought there’s probably a big buck living there? Or maybe you just moved to western Canada and you’re not sure how and where to find game in the unfamiliar terrain. Well, with the warm weather of spring upon us, there’s no better time to begin researching a new hunting area. Here’s my strategy for off-season scouting.

One of the first steps when looking into a new area is to go online and check out the various hunting forums. Luckily for those of us who live in the West, we have some of the best online forums in North America devoted to hunting. Just search for Alberta, Saskatchewan or Manitoba hunting forums and the most popular ones will appear first in the results.

Spring can be the best time to search through these forums, because everyone’s had enough time to post information about their previous fall hunts—and answer questions from others, which often provides even more insight. You can usually narrow down your search to specific regions.

Look for stories of both success and failure—the two perspectives can tell you a lot about the area. It is also important to learn how people hunted. If they didn’t see game, for example, but never left their truck, that doesn’t necessarily mean the area has no game. It’s one thing to strike out when sitting in a treestand or driving around, but when you’re spot-and-stalk hunting the West, it’s common to see a lot more animals. Reports of daily game sightings are what you want to find (below). 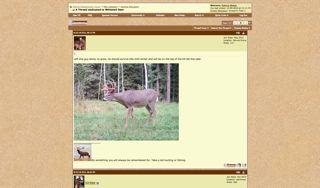 Once you’ve found a few people talking about a specific area you’re interested in, it’s best to message them privately for details. You should start a simple conversation before trying to extract information, so you don’t scare them off. This can take quite a lengthy conversation before they trust you with information about where they hunt. But if you’re able to get someone to open up, it will definitely be worth the effort.

Once you have some initial information, it’s time to look into the area’s game populations. You can do this in a variety of ways, but it’s often best to go to those in the know: biologists and conservation officers.

Spring is an ideal time to research animal populations because that’s often when biologists are recruiting volunteers to help with annual game counts. Many game surveys in the West are conducted from airplanes. Flying along with researchers can give you first-hand knowledge of an area’s populations, as well as let you travel through a vast region in a short amount of time.

If you’re unable to volunteer, at least make time for some phone calls or to take a CO out for a coffee. It’s important to have a list of questions prepared ahead of time so you don’t overlook anything. Ask about specific populations, travel corridors, mortality rates, past trophy quality and spring, summer and winter ranges. You’ll be surprised not only with the amount of valuable information these experts possess, but also how willing they’ll be to share it

For scouting Western Canada’s unique and open landscapes, Google Earth can be an excellent resource. If you’ve never used this free application, spend some getting to know how it works first before beginning your online scouting. In a nutshell, Google Earth uses detailed satellite imagery to let you view any part of the planet, right down to specific geographical features.

With so much contour and variety in the West’s terrain, natural game corridors often force animals through small, tight funnels, which can be the perfect spot for an ambush (below, in red). These tight areas, with little to no escape route, can be anything from a steep mountain chute to a deep coulee on the prairies. You can find them via Google Earth by rotating the display from an overhead view to a low-angle side perspective, allowing you to see the terrain as if you were actually there.

You can also identify bedding areas. They’re often found on shelves in mountain or coulee systems, offering game a good vantage point to spot predators below, while providing cover from behind. By examining topography and vegetation, you should be able to find these spots.

As for food sources, looks for farmland bordering the area you plan to hunt, or grassy meadows high up in the alpine. And once Google Earth helps you pinpoint a spot that has a possible food source, as well as bedding area and travel corridor, it’s time to get off the couch and enjoy the spring weather.

Verifying all the information you’ve gained from your various sources is the most important step of spring scouting. This doesn’t necessarily mean going out and expecting to see hundreds of animals, but you do want to find sign that game did indeed live in the area during the previous fall.

Start by hiking through the natural game funnels you identified on Google Earth. Look for sign such as old scrapes, rubs, game trails and natural mineral licks. Locating game itself is great, but as long as you’re finding sign, don’t be discouraged if you don’t see animals. After all, game often inhabit very different ranges between spring and fall.

While you’re scouting, also take note of obstacles that could make it difficult to retrieve a downed animal. Features such as cliffs, gorges, steep scree and rock chutes can influence where you decide to squeeze the trigger. It’s best to mark these areas on a map while scouting—well before you have to make a quick decision with an animal in front of you.

To me, the final and most enjoyable step is compiling all of your information into a solid game plan for the fall. There’s just something exciting about having a plan in place, and letting the anticipation build as the days count down. With several months left before the season opens, you’ll also have lots of time to fine-tune your gear and continue scouting your newfound area.

No matter where you decide to hunt, don’t let unknown territory remain a mystery. And with today’s resources, it’s easier than ever to plan a hunt during the off season. There’s no guarantee you’ll shoot a buck or bull on your first outing, but you’ll definitely have better odds than you would going into a new area blind.

Nick Trehearne is already counting down the days until the fall hunting season.