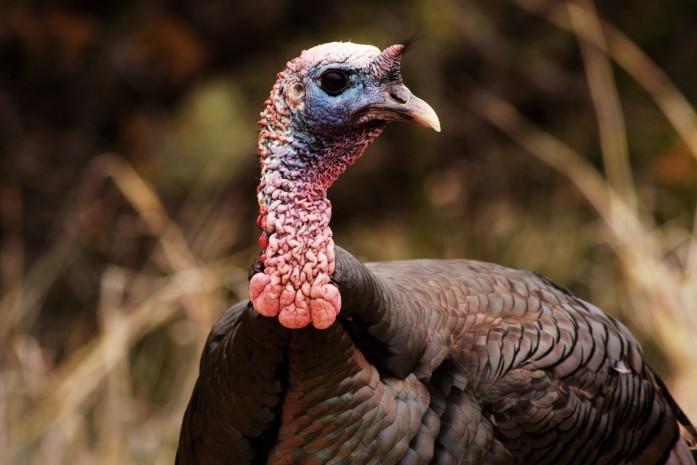 How to stay on target when turkey hunting

Every spring, many turkey hunters leave the woods dejected, wondering how they missed a 20-pound bird with a shotgun spraying up to two ounces of pellets. There’s the problem: modern turkey guns, chokes and shells don’t spray pellets. Instead, they throw a small, dense pattern, which is only an advantage if you can actually hit what you’re aiming at.

Remember, a turkey’s kill zone—its spine and brain—is only the size of a grape sitting on a pencil. Since you’re shooting a tight swarm of pellets at such a tiny target, you should think of your shotgun as a rifle, and sight it in like one. There are many wonky-shooting smoothbores out there, so you need to verify that your shotgun indeed hits where you think it does.
And once that’s been established, the next step is to make sure your choke and load combination is creating a uniform pattern, as any big gaps can also mean missed birds. So before you head out this spring, take the time to sight-in and pattern your shotgun. Here’s how.

Sight-in your shotgun while sitting on the ground with a solid backrest, such as a tree, just as you would when actually hunting. Rest your forward elbow on your knee to steady the gun. You won’t have a table or bench rest with you when a gobbler comes in, so the more trigger time you have while simulating hunting conditions, the more natural it will become.

To begin, use 2 3/4-inch standard load shells with #4, #5 or #6 shot. Don’t waste turkey shells or heavy game loads at this point—they’re more expensive and their kick is brutal. Make two-inch targets by tracing a pop can bottom with a thick black marker on a wide piece of cardboard or paper. Draw an X through the circles for an aiming point.

Set up the targets at 10 yards. The shotgun’s dense pattern at such a close range will be like a single projectile, making it easy to see exactly where it hits. An inch off-centre at this range is a complete miss or a wounded tom at 30 yards. Also, ol’ three toes could walk by you that close, so you need to know where your gun hits at that range and how compact the pattern is.

If you have a bead or open sights on your shotgun, take a six o’clock hold under the centre of the X. If you have a scope or red-dot sight, centre the crosshairs or dot on the X. Shoot three times at three separate targets using the same aim point on each one. If the target centres get blasted away, your gun is hitting where you aim. If not, you can now begin adjusting to correct it.

If you only use a bead sight and are off the mark, first make sure you’re properly mounting the gun to your shoulder. Weld your cheek to the stock and look straight down the barrel or rib with your master eye. If you raise your head off the stock, you’ll miss high.

If your gun hits off the mark with a proper mount, and has an installed choke, ask a gunsmith to check it. If it’s not the choke, a gunsmith can straighten the barrel in a jig or you may be able to get a new barrel for your gun. If the shotgun has a single bead, have a second bead installed mid-rib. Lining up both beads ensures proper aim and helps prevent you from lifting your head.

If you’re off the mark with telescopic or other adjustable sights, make the adjustment and repeat three shots at fresh targets to verify your gun is putting the shot on centre. Take one more shot with a turkey load at a new target to see where it hits. Magnum and super-magnum turkey shot shells hit higher because they’re higher velocity. Lower the sights again if this is the case, and take another shot to confirm you’re dead on. Then shoot at a new target at 30 yards to confirm that the pattern is centred on the bull’s eye at longer ranges, too. (Also see “Pattern Perfection” below.)

Avoid the temptation to compensate for a crooked shooting gun with “Kentucky windage”—aiming off the target to hit the target. That will cost you your tom when you’re in an agony of nerves waiting for him to come into range and can’t remember if you have to hold to the right or left of his neck. By first sighting-in your gun, you’ll know that when you put the dot on his wattles, it’ll deliver that tight swarm of pellets with rifle-like precision.

The goal of patterning is to figure out what shotshell-and-choke combination creates the most uniform shot pattern, and how far downrange it can throw a lethal pattern. For turkey hunting, that lethal pattern is 100 pellets in a 10-inch circle—hunting heartbreak is assured if you don’t pattern your gun accordingly.

To start, choose a few brands of shells to test with your turkey choke of choice (see “Combo considerations” on the next page). Sit on the ground as you would while turkey hunting, or shoot from a bench rest or gun vise. Use turkey-head targets with a 10-inch circle on them, or draw 10-inch circles with a thick marker on wide paper or cardboard (a 10-inch pot is great for tracing the circles). For an aiming point, colour in a two-inch bull’s eye in the middle of the circle.

Patterning requires a fresh target for each shot. Start at 20 yards and take two shots with each type of shell. On each target, write down the distance and the shell used. If you suspect you wobbled off the target when you squeezed the trigger, shoot again with the same shell to give it a fair chance. If your best pattern is consistently off-centre, you can adjust your sights for that shell and try it again. If you can get it centred on the target and are pleased with it, stick with that brand of shell.

Now repeat the process at 30, 35 and 40 yards, again recording the type of shell and distance on each target. Once you’ve finished shooting, examine and compare the targets. What you want is a pattern with evenly spaced hits. Reject a pattern with gaps as big as your fist, because that could mean a missed or wounded turkey in an actual hunting situation. As well, count and record the number of pellets that hit within the 10-inch circle—your gun’s maximum range will be the farthest distance it’s able to punch 100 pellets into the circle.

Keep in mind that #6 shot, having so many pellets, can print 100 hits in a 10-inch circle at ranges beyond 50 yards through super-full chokes. But real turkeys aren’t made of paper, and these smaller pellets don’t retain enough energy to penetrate the skull and vertebrae reliably beyond 40 yards. Hevi-Shot retains its energy better than lead shot, and can therefore slightly extend the killing range of #6 shot.

Along with good set-ups and effective calling, knowing how your shotgun, choke and ammunition perform is key to a successful spring turkey hunt. So the next time you work that 20-pound gobbler into range, say goodbye to dejection and hello to the confidence of knowing you won’t miss.