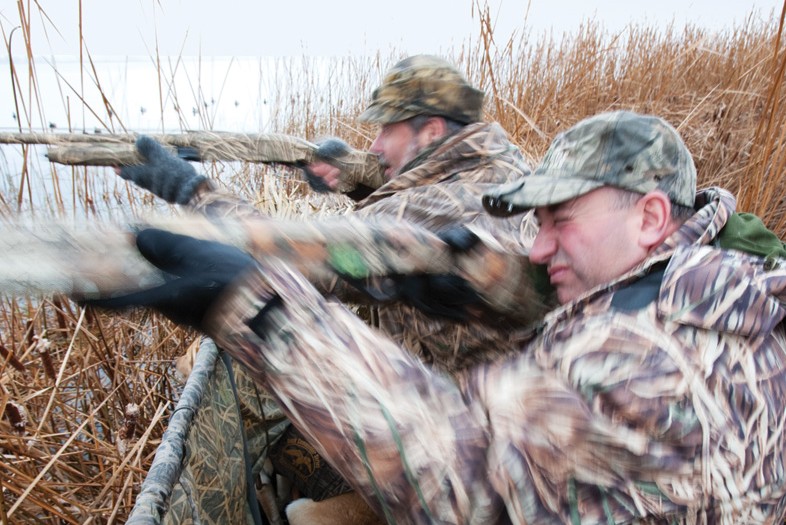 How to survive Canada’s most dangerous hunt

Waterfowling is perhaps the most risky hunt of all. What to watch out for

In 2009 in California, a hunter took a load of #2 shot in the back after he laid down his shotgun and his dog stepped on it. Fortunately, the man survived, but the incident illustrates just one of waterfowling’s many dangers—and one I hadn’t previously considered at that.

As hunters, we know how safe duck and goose hunting can be when we’re prepared and careful. But potential dangers, at times life threatening, are always just one mistake away—and perhaps more so with waterfowling than with any other type of hunting. If you’re new to the game, or in need of a safety refresher, here’s how to keep danger at bay.

The shotgun is at the heart of much of the peril, as there’s simply no firearm that can do as much damage at close range. There are reasons police officers and the military use shotguns for close-quarter defence, and waterfowling is all about close-quarter interaction, with sportsmen seldom hunting alone. When duck or goose hunting, shot opportunities can arise quickly, and with numerous targets flying at all angles, it’s easy to lose track of your companions when swinging on a bird. Most often, waterfowlers are seated when hunting, posing an additional risk should one hunter unexpectedly stand when another is firing from a sitting position.

Tip: It can’t be said too often—always control the muzzle of your shotgun.

Today’s well-concealed layout blinds have no equal when it comes to effectively hiding from incoming birds—there have been days I could have reached out and grabbed a goose by its feet. They’re also relatively easy to set up, adding to their current popularity. On the downside, effective communication among hunters lying in their individual blinds can be challenging, adding to the risk of accidents once the shooting begins. In days gone by, by contrast, shared pits or willow blinds were the preferred option when gunning in fields, allowing for easy communication and coordination

Another risk with layout blinds is that some hunters, particularly older ones, have trouble rising to a sitting position to shoot, which can result in poor muzzle control.

Tip: Appoint a hunt captain who is responsible for announcing which direction birds are approaching from, as well as for giving the go-ahead to rise and shoot. Also, consider alternative blinds for those who have trouble shooting from layouts.

Big-water hunting introduces many additional dangers. Whenever frigid water and boats are involved, the risks of falling overboard are amplified. Waves can easily upset a hunter setting out decoys or picking up downed birds, and even flat-bottomed boats can capsize or take on water in rough conditions. Going into the drink wearing bulky clothes and waders, with pockets full of shotgun shells, makes swimming for safety an arduous task at best. No more than a few unfortunate hunters have drowned after an unexpected spill.

Tip: Wear a life jacket at all times when you’re in a duck boat, even if you believe the water is shallow.

The craziest waterfowlers are those who hunt sea ducks. Beyond the perils of capsizing or falling into the ocean, tides and their associated currents can also pose risks. One of the most compelling hunting stories ever written, Lawrence Sargent Hall’s “The Ledge,” relates the fictional tale of a man, his son and his nephew hunting a little hump off the Atlantic coast. In short, their skiff floats away and the incoming tide eventually drowns them.

Unfortunately, hunters on both coasts get themselves into similar trouble every year by not paying attention to the tides. Some get stranded by falling tides, their boats left high and dry, while others find themselves in a fix due to rising tides. And while it likely doesn’t need to be pointed out, getting into trouble on the ocean is typically far more dangerous than it is on inland waters.

Tip: Always know and abide by the tide tables when hunting on saltwater.

When the shooting is fast and furious, it can be all too easy to forget to pay attention to the weather. Don’t. When hunting the water, fog or storms can move in quickly, leaving you in a precarious position. I once missed the rapid approach of a fog bank on my favourite diver lake, for example, so my hunting buddies and I picked up our blocks and struck out for what I thought was the boat launch. Even though I know the lake like the back of my hand, I quickly got turned around in the pea soup-thick fog and falling darkness. We motored around for the better part of an hour, fearful of going too fast and running the boat up on an island or a sunken rock pile. Eventually we made shore, albeit a good five kilometres from the truck.

Tip: Whenever you’re hunting on large bodies of water, carry a compass or GPS. Know how it works, and use it.

Waterfowling just wouldn’t be the same without our four-legged hunting partners. But even the best-trained dog can be unpredictable, posing some measure of threat to anyone handling firearms—just ask the California hunter who got shot by his dog. More often, though, the greatest danger is to the dogs themselves, and losing or injuring one afield brings with it a special brand of misery and regret. Our dogs have as much enthusiasm for the hunt as we do, only marginally less common sense than most of us, and generally a darn sight more energy.

This combination invariably leads to accidents of one sort or another. A truck once ran over one of my dogs in a goose field, for example, and I once had to rescue a partner’s dog from drowning when he got stuck in the ice while making a retrieve. Another time, I had to carry my dog a mile out of the field after she succumbed to low blood sugar during a freezing-cold winter hunt. My dog has also had the usual run-ins with the likes of porcupines, skunks, barbed wire and sharp sticks. While it’s our responsibility to guard their safety where we can, it’s just as important to be prepared to help them if things do go wrong.

Tip: On hunting days, particularly in cold weather, feed your dog regularly to ensure its energy level remains high. And always carry a simple first aid kit to treat common injuries; your vet will be happy to put one together for you, along with advice for the appropriate treatment.

The combination of cold weather, wet conditions, bulky clothes and tough slogging through muck while carrying heavy bags of decoys and stringers of geese or ducks can put an unusually high strain on your body. Don’t overdo it; take your time and make multiple trips if you must carry your gear to and from the fi eld. It’s tough enough for your partner to haul six or eight giant Canada geese out of a gumbo field without having to drag you out as well.

Tip: Dress in layers to allow maximum flexibility as the day’s activities unfold, and get in as good shape as possible before the season begins.