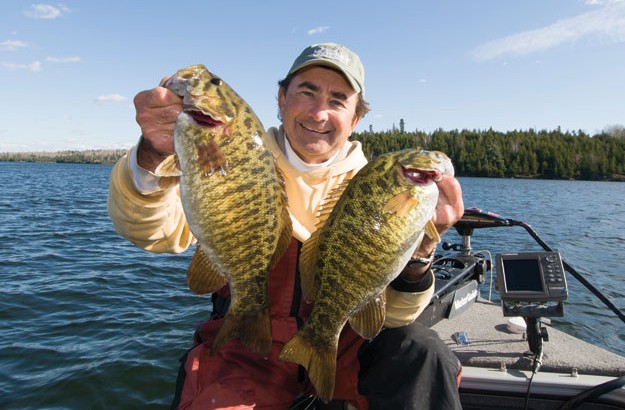 How to target smallmouth bass in fall

At Northern Ontario’s Shoal Lake Bass Classic this year, my partner and I faced a major conundrum. I had caught a pig of a smallmouth bass and was watching it wallow on the surface when an even bigger bronzeback appeared, lapping up the crawdads my fish had spit out. By emptying their stomachs, bass can brawl better, and their buddies know it—they’ll swoop under, over and around a hooked fish, gorging on the free food. While this is entertaining to see when you’re fishing for fun, followers create a dilemma when it comes to fishing tournaments. Do you quickly net the fish in hand or do you risk everything by using it as a decoy while your partner tries to double up?

Case in point: During the Kenora Bass International a few years back, I hooked a big smallmouth with only five minutes to spare, then spotted seven or eight more bronze beauties swooping in beneath it. With time running out, my partner and I decided to net the first fish, gambling that we could catch at least one of the groupies on one of our remaining dozen or so casts.

The good news is that the fish we netted bumped us up into the top 10 teams and we cashed a cheque for several thousand dollars. Had we kept the fish in the water and doubled or tripled up instead, however, we might have won the tournament and 10 times the award money.

Haunted by that memory, I kept my Shoal Lake bass alongside the boat, while my partner dropped a lure for its buddy. But the follower didn’t bite and eventually disappeared. Then, to make matters worse, my hooked bass pulled free, only inches away from the net. Each of those fish would have been worth $5,000 in prize money.

So what’s the secret to catching followers? For starters, always be on the lookout for them—behind or under every fish you hook. And they might not even be the species you’re targeting, either. Many times I’ve thrown follow- up baits on top of northern pike, for example, and caught trailing bass. I’ve likewise thrown on top of big bass, felt a thump and found myself attached to a big toothy critter.

In fact, I don’t even wait until I can see the groupies. I simply assume there’s at least one, so as soon as my partner hooks a fish, I instinctively grab my follow-up rod at the same time I reach for the net. Then, when my partner’s fish approaches the boat, I open the bail and let my lure fall to the bottom. After I’ve netted the first fish, I’ll pick up my rod, reel up the slack and gingerly feel for a follower on the end of my line. It’s amazing how many fish I catch that I never see coming.

For my follow-up rig, I prefer a short 6ó-foot, medium-heavy-action spinning rod spooled with 10- to 14-pound-test monofilament. If you use braided line, don’t worry about tying on a leader, as followers are rarely line shy. The connecting knot is simply just another thing that can go wrong.

Small, compact, relatively heavy, easy-to-see baits are best for securely hooking followers. A silver tube jig with a razorsharp Gamakatsu hook is my follow-up bait of choice. Senko-style stick baits also work well in shallower water. Still not sure whether it’s a wise idea to use a big fish as a decoy to catch another lunker? Let me leave you with one parting thought: You’ll never hit one out of the park if you don’t swing for the fences.