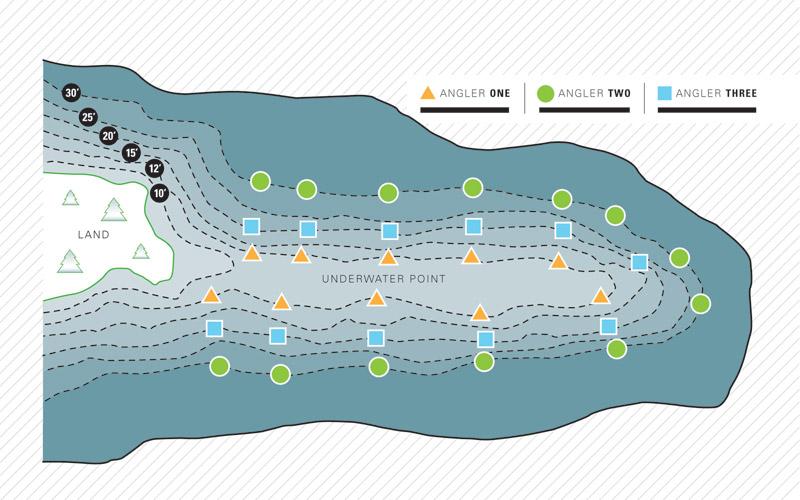 Three ice anglers each equipped with augers can drill several sozen holes over a piece of structure to cover every possible depth option.
FishingIce Fishing

How to troll on ice

Don't let ice-up stop you from trolling this winter

If you asked me to name my one ice-fishing tactic that’s accounted for more and bigger black crappies, lake trout, walleye and yellow perch over the past five winters, I would have to say it’s trolling. That’s right, trolling. On hard water.

The best way to explain the concept is by first looking at a common mistake many ice anglers make when they set up on a spot and fish as a group. I’ll give you better odds than a Las Vegas bookie that one angler will begin drilling holes while another follows and checks the depths with a sonar unit. Yet another angler, meanwhile, will lag behind scooping slush from the holes. Compare that to how I would tackle the same spot with two fishing buddies.

Let’s assume it’s over a long, tapered underwater point. With each of us armed with a gas-powered auger and standing parallel to one another, we’d simultaneously begin drilling holes over the entire structure.

I would follow the top edge of the point out from shallow to deep water, putting down a hole every 20 feet. One of my friends would do the same, but follow the structural transition where the hard-bottomed deep edge of the point merges with the soft basin of the lake. The third friend, meanwhile, would drill holes along the slope between us. Within minutes, we’d have covered the critical fish-holding top edge, bottom edge and middle of the slope (see diagram by Matt Filion below).

Starting at the shallowest holes and working our way out toward the tip of the point, we’d systematically fish every hole in rapid succession, dropping down our transducers and lures and never spending more than three to four minutes on a hole before moving on—unless we catch or see fish.

One of the neat things about trolling on ice is that it works best when the fishing conditions are at their absolute toughest, typically during the mid-winter February doldrums. The tactic is especially deadly in big lakes where the fish have plenty of room to spread out and roam. That said, it’s no less lethal on smaller lakes and rivers during the peak of the season.
Trolling on ice can be even more effective if you do a bit of preparation during the open-water season. For example, I like to visit some of my favourite winter fishing spots by boat and lay down waypoints along three specific “trolling paths” by precisely monitoring my sonar/GPS unit. I’ll also drop critical waypoints on any isolated cover—a single boulder, small rock pile or the tip of the point—at the same time I’m plotting the three trails on my GPS.

Once I return home, I transfer the waypoints to the portable GPS unit on my snow machine. Then come winter, I can trace the trolling paths in the snow as I slowly drive my machine around the structure. This way, there’s no guessing as to where the holes should be drilled.

And you thought you could only troll from a boat.