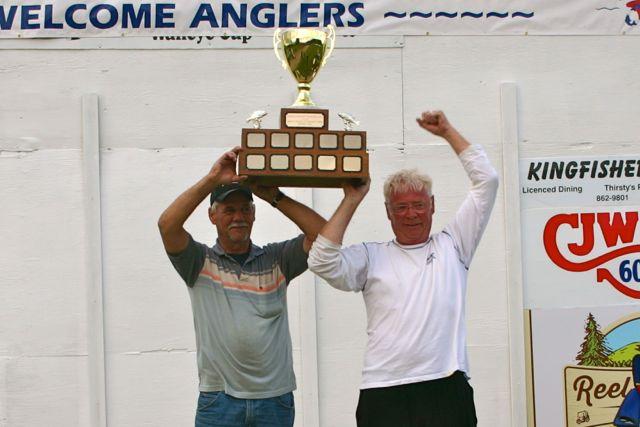 Pro secrets: How to win one of Canada’s biggest walleye tournaments

Tournament partners for the past two decades, 62-year-olds Bill Jung and Doug Zwingli fish almost exclusively for walleye. Their combined skill, experience and luck aligned perfectly last year when they took home the top prize in one of Canada’s marquee walleye tournaments: the Saskatchewan Premier’s Walleye Cup on the river section of Tobin Lake near Nipawin. And now the two Melfort anglers are getting set to defend their title during this year’s tournament, set for August 7 and 8. Jung even used his half of last year’s $41,500 prize to buy a trailer and rent property near the tournament waters so he could scout and fish all summer long. We asked him to share his team’s other winning strategies.

As with a successful marriage, the first and most important thing when you’re fishing tournaments, Jung says, is communication. “We’ve seen so many teams out there on the water and they’re discussing things angrily,” he says. “You can’t fish when you’re mad at your partner.” Indeed, Jung says he’s never had an argument with Zwingli. “We always talk things out to see where we want to fish and make sure we agree so we’re both comfortable.”

Presentation Jung and Zwingli use a modified Lindy Rig—a six- to 10-foot harness ending with a leech skewered on a Gamakatsu hook. They use eight-pound Fireline for the main line, with eight-pound Vanish monofilament for the harness. “You put a slip sinker on—different weights depending on your speed—so your weight is bouncing along the bottom where the walleye feed.”

The deepest they fish is 25 to 30 feet, while the shallowest is 15 to18 feet, Jung says. “We don’t fish as shallow as a lot of other people,” he says. “We follow the old river channel and try to work that drop, going up to the top and back down to the bottom.”

Since the Premier’s Cup takes place in a river system, controlling the position and speed of the boat is crucial. Jung says they try to drift along as slowly and naturally, as possible. “Stay on your line,” he advises. “If the current comes up too fast, you can use your trolling motor to slow down.”

According to Jung, the river section has washed out twice in the last seven years, changing the bottom from rocks to sand. Still, he and Zwingli look for any bottom changes or transition areas. “You’re looking for any kind of a structure at all,” Jung says. “If you can find rocks or humps on the bottom, there’s usually fish hiding behind them.”

Learn more about the Premier’s Walleye Cup at www.outdoorcanada.ca/premierscup.