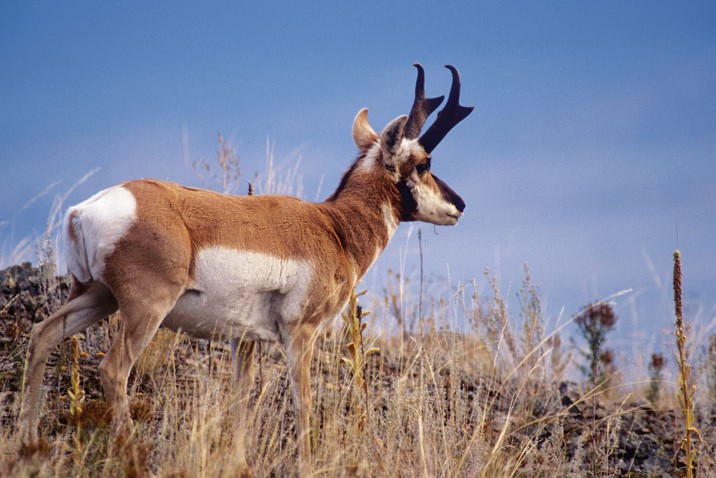 How to hunt pronghorn antelope

Teddy Roosevelt once described the pronghorn antelope as “a queer animal, with keen senses, but with streaks of folly in its character.” Not a very endearing description, but it’s par for the course for this unique plains speedster, the only member of the antelope family in North America. For while the pronghorn may be wary and fast, it can also be curious to a fault—all of which makes for an interesting hunt.

Most pronghorn hunters use spot-and-stalk techniques. Where township roads are available, they’ll often cruise around before the season opener, using spotting scopes and binoculars to locate herds and identify trophy males. Unless disturbed, pronghorns usually don’t wander too far at this time of year, allowing hunters the luxury of scrutinizing several groups of animals before deciding which ones deserve their attention on opening morning.

Where there are no roads, as is the case for much of the pronghorn’s habitat, you’ll have to do your scouting by horseback, ATV or shank’s mare, depending on local regulations and the discretion of the landowner. And once the season has started and most of the groups have been disturbed, the animals will be considerably less predictable. That means you may have to put on many more miles to find some that aren’t on the move.

The pronghorn has two primary means of defence: its wonderful eyesight and its tremendous speed, which come into play if it detects a threat. With eyes the size of a horse’s on their little bodies—they typically stand just three feet at the shoulder and seldom weigh more than 150 pounds—pronghorns have earned a well-deserved reputation for being able to spy even the slightest movement at extreme ranges.

The goal of the hunter, then, is to sneak within comfortable shooting range, usually 150 to 250 yards. For those who’ve not spent much time on the prairies, this task isn’t quite as daunting as it might sound. Contrary to most impressions, the open prairies are not flat, but rather a patchwork of little folds, depressions, rises and valleys. If a hunter keeps the wind in his face, exhibits some patience and avoids another, less-appealing prairie inhabitant—the cactus—he shouldn’t have too much trouble crawling to within a comfortable shooting range.

Many hunters suggest that the pronghorn is an ideal big-game challenge for the beginner, and I tend to agree. They’re relatively easy to spot, and they give hunters the opportunity to practise important spot-and-stalk tactics that they’ll employ the rest of their hunting lives. And because rifles in the .243 to .270 range are ideal, excessive recoil shouldn’t be an issue.

You also don’t need a lot of equipment. Beyond the standard rifle, ammunition, optics and knife, the only other important gear you require is a bipod and a compass or GPS. Why a compass? Because the prairies have so few landmarks, it’s not hard to get turned around. Last fall, for example, a friend of mine forgot his compass and got lost in an early-morning fog. Only sheer luck got him back to his truck.

Bowhunters, meanwhile, find success by sitting in blinds set up next to known pronghorn watering holes. From there, they can use decoys to lure in competitive bucks. Even “flagging” (much as you would with geese) will attract these naturally curious animals.

With Saskatchewan and Alberta being the only provinces with pronghorn seasons, and with only Alberta offering licences to non-residents, opportunities are, admittedly, somewhat limited. Nonetheless, I encourage anyone to try this hunt at least once. The pronghorn, its habitat and the experience are all unique, and truly offer one of the greatest thrills in Canadian hunting.

More on the pronghorn

The pronghorn, or Antilocapra americana, is the only member of the Antilocapridae family of North American ungulates, landing it genetically somewhere between the Cervidae (deer, moose, elk) and Bovidae (sheep, goats, muskox) families. Although it may bear some resemblance to the antelope of Africa and Asia, there is no close relation. The grasslands of southern Saskatche­wan and Alberta mark the northern end of the pronghorn’s range, which extends south to the hot, open country of the American southwest and northwestern Mexico.

It’s estimated that at one time there were 40 million pronghorns in North America, surpassing even the bison in numbers. But with settlers and domestic animals encroaching on the grasslands, numbers fell to fewer than 30,000 by the early 1900s. Wildlife managers responded with significant protective measures, and the resurgence of the antelope—now numbering roughly one million—is truly a continental wildlife success story.