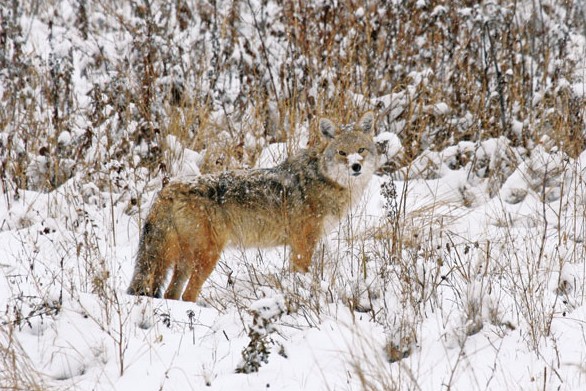 To anchor these wily winter varmints, you need just the right rifle and round

For hunters looking to cure the winter blues, coyotes offer the ideal remedy. Widely distributed across Canada, they’re quick, elusive and relatively small—and that presents an interesting challenge, demanding the proper gun and load to get the job done.

When hunting coyotes, it’s important to remember that one of the objectives is to minimize pelt damage while ensuring a humane kill. Too much gun typically causes excessive damage to the fur, while too little can mean a wounded and lost animal.

As with other game species, there is a wide spectrum of rifle/cartridge combinations that can do the job. However, there’s a relatively narrow field of ideal options. Over the years, I’ve taken coyotes with calibres ranging from .22LR up to .300 Win. Mag., but believe me when I say neither of those two extremes is particularly well suited for the job.

Coyotes are amazingly tough creatures with strong instincts for survival—I’ve seen them travel significant distances with wounds that would surely bring down most other animals. For that reason, I discourage the use of rimfire cartridges for coyote hunting.

While I acknowledge that many rimfire rounds are capable of killing a coyote at short to medium distances, the shooter must be extremely precise. Remember, these are quick animals-accurate shots can be a real challenge at the best of times. Further, many rimfire cartridges can cause excessive, though not necessarily fatal, damage if your shot isn’t perfect.

The cartridges best suited for coyotes come from the family of .22-calibre centrefires; the most popular choices across Canada are the .222, .223 and .22-250 Remington. All three are capable of pushing a 50-grain bullet at muzzle velocities exceeding 3,000 fps, with the .22-250 hitting 3,800 fps with some factory loads.

This makes the .22-250 lethal coyote medicine out to nearly 400 yards, though bullet drop and wind drift become significant factors beyond 300 yards. As such, hunters must be very selective about what shots they take beyond that distance. The maximum distances for the .222 and .223 are 300 and 350 yards, respectively.

Some hunters swear by the .17 Rem. as a coyote round, but I’m not convinced the .17’s 25-grain pill is enough. The relatively new .204 Ruger promises to be an exceptional coyote calibre, but I haven’t tried it yet. The .220 Swift, .225 Winchester and .224 Weatherby Magnum, meanwhile, attracted legions of fans following their introductions. And while excellent coyote cartridges, they’ve all lost ground thanks to the popularity of other .22 centrefire rounds.

The latest entry into the .22 family is the .223 Winchester Super Short Magnum. Capable of performance that slightly exceeds the .22-250, this potent little cartridge lends itself to use in short-action rifles.

Short-actions are usually favoured where rifle weight is an issue, but these lighter rifles aren’t necessarily ideal for the long-range shots that maximize the benefits of high-velocity cartridges. In fact, many long-range varmint rifles have heavier “bull” barrels that aid in accuracy. Only time will tell if the .223 WSSM finds a dedicated following.

When it comes to rifles for coyote hunting, meanwhile, the options are nearly limitless. While some manufacturers make specialized varmint rifles, they’re best suited to situations where multiple shots are taken relatively quickly. In most coyote hunting situations, however, you’ll be limited to one good shooting opportunity-I’ve yet to meet the coyote that hangs around for a second look.

For the same reason, action type isn’t a major concern. Any modern rifle from a reputable manufacturer should do the job, provided you find a load that it shoots well. My current coyote rig is a Savage Model 112 in .22-250. It shot tacks right out of the box and has never let me down in the field. Find the right rifle and you, too, can melt away those winter hunting blues.

While some coyote hunters prefer scopes with high magnification (16X or greater), I recommend sacrificing some power for an increased field of view. Coyotes have a way of disappearing from sight, then reappearing where and when you least expect them. A 9X or 10X scope with a wider field of view makes it easier to track them downrange.