How to tease jumbo perch into biting

Playing hard to get: Yellow perch

When a huge fish shows up on your sonar screen, there’s a natural tendency to drop your lure in front of its face. But trying to make it easy for a fish to bite rarely works. So how do you get the fish to bite? By making it harder for them! If you understand the species you’re targeting, you can trigger their predatory urges by tempting, teasing and goading them into attacking your bait.

Unlike lake trout and whitefish, which relish our frigid Canadian winters, yellow perch are “cool-water” fish, and less active during the hardwater season. You still need to tease them into biting, but their different metabolism requires a much more reserved approach.

For starters, you typically spend more of your ice-fishing time watching them on the sonar screen, monitoring how they react to the way you’re presenting your bait. I almost always use the zoom feature on my Humminbird Ice 55 flasher when ice fishing for bottom-hugging perch. That way, I can isolate and enlarge the basin portion of the lake, removing from view the vast majority of the irrelevant water column these fish rarely use. If you don’t zoom in, your sonar often can’t detect the fish. Blow up the bottom view, on the other hand, and the perch and walleye will look like lumbering whales.

Yellow perch, in particular, are prone to starting the day like laid-back beach bums. When I see them on my sonar screen, I’ll try several different presentations, including a W2 Jigging Rap and a W20 Williams Wabler, both tipped with a minnow head, and an untipped 3/32-ounce Freedom Lure Minnow (below). I’ll dance each offering a foot or so above the fish, pausing it often so that it hangs in the water column tantalizingly close—but still not in front of their noses. Eventually, a perch will slowly rise up and snap at my bait as I gently tease it away. 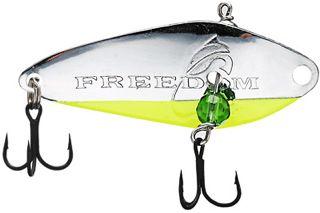 Interestingly, once I’ve caught the attention of that first perch, the fish that follow will typically react much more quickly and aggressively, until the whole school is eventually fired up. By the time I’ve iced a half-dozen or so jumbos, in fact, the fish still down below become so excited, they’ll rise up to intercept the lure the moment I drop it into the hole.

It’s at this point that I typically make two strategic adjustments. First, I dispense with the minnow head on the Jigging Rap and Williams spoon. You waste too much time rebaiting the lures, and besides, once the perch are energized, they don’t miss the smelly offering anyway. Next, I move up one lure size and jig a bigger W3 Jigging Rap, W30 Williams Wabler or ¼-ounce Freedom Minnow. The extra weight causes the bait to fall faster and dance more erratically, both taking advantage of and further provoking the jumbos’ feeding frenzy.