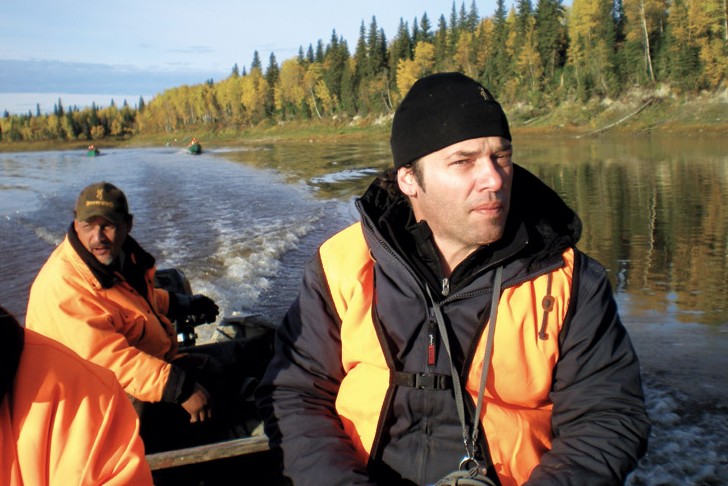 Q & A with Joseph Boyden

Though he spends most of the year in New Orleans teaching creative writing, Canadian author Joseph Boyden makes frequent trips back to this country to fish, hunt and go snowmobiling. He’s particularly drawn to Ontario’s northern fringes, saying the remote area helps him maintain a connection with nature, as well as remind him of the need to act wisely in the woods. “Feeling inconsequential to the rest of the world is on page one of the handbook for becoming a writer,” says Boyden, who is of Irish and Ojibway heritage. His novel, Through Black Spruce, won 2008’s $50,000 Scotiabank Giller Prize.

On connecting with the land

Some of what I consider my most important epiphanies as a writer were experienced in the bush of northern Ontario. I write primarily from the point of view of First Nations, of which I am a part. My writing didn’t really mature until I reconnected with the land in a big way in the mid-1990s, and from there I’ve constantly been amazed and hugely appreciative to recognize how humans are just one small part of the bigger landscape.

On his outdoor mentor

I first met Cree legend William Tozer while teaching his wife, Pamela, at Northern College in Moosonee, Ontario. I’d asked around town about who was the right hunting/fishing guide and snowmobiler to show a relative tenderfoot the ropes. Everyone said “William Tozer.” It’s been magic ever since. William is one of the greats, as both a guide and person. He actually was a huge inspiration for my latest novel. His knowledge of the bush astounds me every time I visit, which is regularly. He runs an amazing operation out of Moosonee, taking snow­mobilers on some of the most stunning runs in Canada. He also built a camp on the Abitibi River that is my favourite place in the world.

On his most memorable hunt

I’ll have to say it’s when my son, Jacob, shot his first moose [in 2005, when he was 15]. William Tozer and I spotted a cow and her calf down a river and across the shore, about 600 metres away. We went back to camp, got my son and a paddling canoe, and made our way back. The river curved in such a way that we knew I could flush the moose out to William and Jacob if they perched themselves in the right spot. While I paddled across the river as quietly as I could, they made their way to a good rise. I then flushed the moose out toward them. There’s nothing quite like the quick succession of rifle shots to know you did well. Jacob shot his calf with open sights in a full run from over 200 metres away. That’s my boy.

On his Canadian connection

Living in the Deep South in New Orleans for a good portion of the year makes my northern heart grow fonder. I write solely about Canada from the geographic and psychic distance of the City that Care Forgot deep in the turmoil of America. I couldn’t do that with any real authority if I didn’t go home to the place I love on a regular basis. And that home is the bush of Ontario.