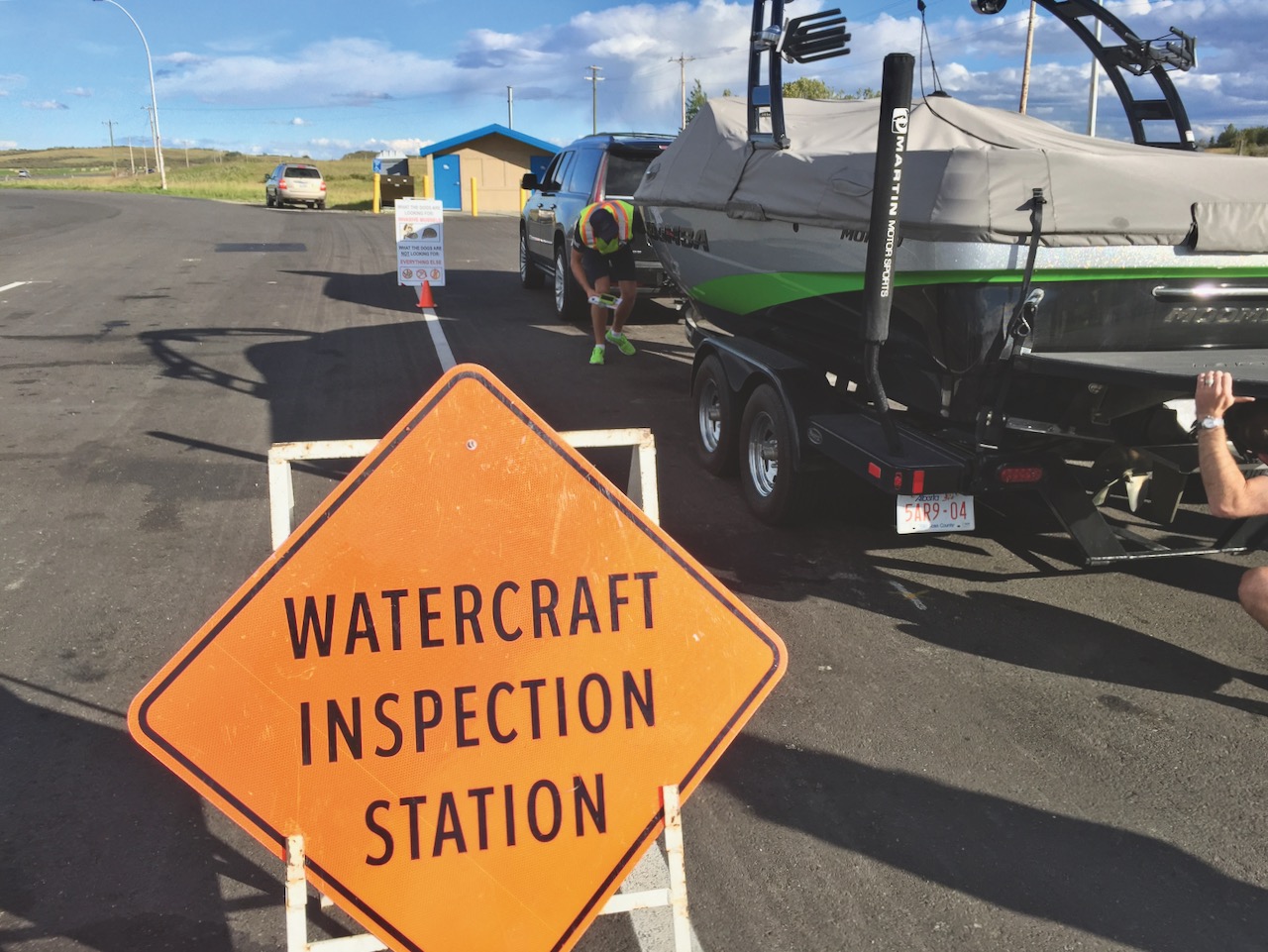 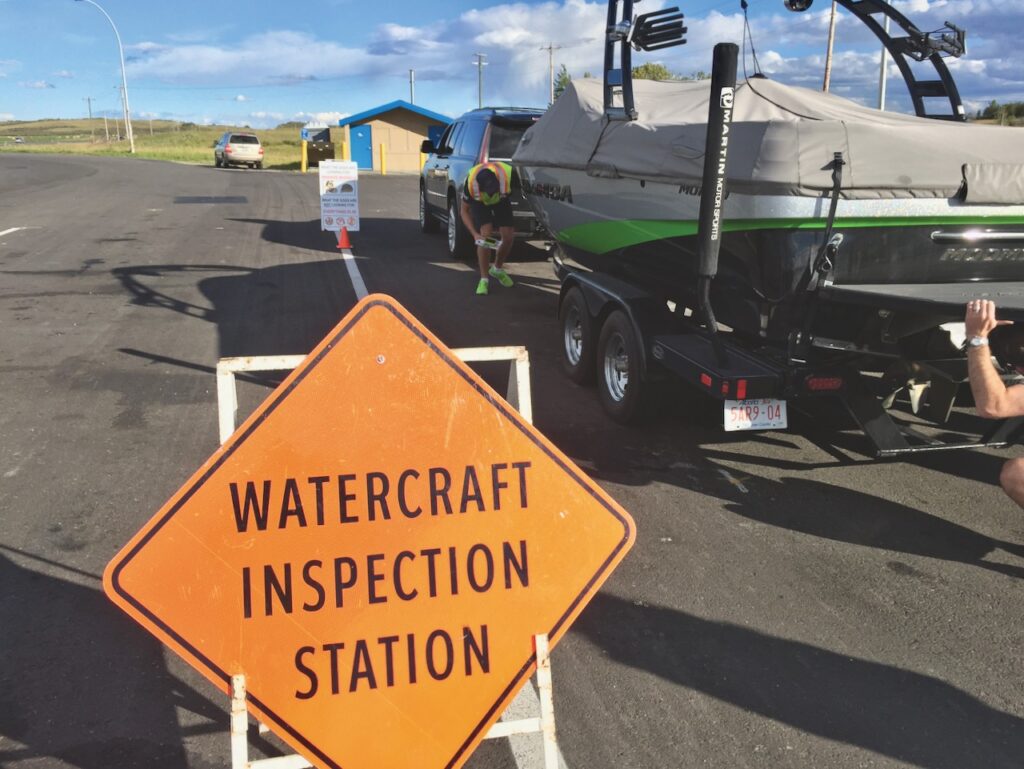 I approach the watercraft inspection station with a nervous feeling in my stomach. Sure, I followed the rules and drained my boat before heading home, but what if I missed something? Am I harbouring an invasive fugitive? I certainly don’t want to be the guy who helps destroy my province’s fisheries because I wasn’t diligent enough in cleaning my gear. Thankfully, I’m given the all-clear and waved on through after the inspectors ask me a few questions and look over my boat and trailer.

Such spot checks provide an extra safety layer to help stop the spread of aquatic invasive species—any non-native fish, invertebrate or plant—that can lurk in livewells or cling to boats, motors, trailers and gear. Often lacking natural predators, invasive species tend to flourish unchecked in their new homes, and once entrenched, they are difficult, if not impossible, to eliminate.

Each year, unsuspecting anglers and boaters give these unwelcome hitchhikers a free ride, inadvertently spreading them from one waterbody to the next. Fortunately, there’s a relatively easy process to kill these aquatic saboteurs and stop their colonization of new waters. Here’s what you need to know.

As their name suggests, invasive aquatic species are aggressive, adaptable and pervasive, making all of Canada’s watersheds vulnerable. They outcompete native species for precious resources and alter habitat, making it inhospitable and reducing local biodiversity. Ultimately, they can negatively impact entire ecosystems, fisheries and the economy.

Species such as the zebra mussel and sea lamprey, for example, have permanently altered the Great Lakes ecosystems. Zebra mussels filter water and make it clearer, which allows light to penetrate deeper into the water column and promote algae growth; adults can live out of water for seven to 30 days, depending on the temperature and humidity. A single sea lamprey, meanwhile, will kill up to 18 kilograms of fish during its adult lifetime.

Spreading smaller invasive species, such as microscopic parasites, is as easy as moving a boat from one lake to another without thoroughly cleaning it. Such organisms can cling to watercraft and gear, or survive in mud or standing water for days, or even weeks.

Releasing live bait and fish from one waterbody into another can also harm ecosystems by introducing different genetics and dangerous micro-organisms. Also harmful is the release into the wild of non-native pets such as aquarium fish, frogs, turtles and snakes. As with unwanted bait, they should be killed and thrown in the trash—not flushed down the toilet. Similarly, non-native plants may seem benign in a flowerbed or backyard pond, but they wreak havoc in wetlands and waterways.

The key to stopping the spread of aquatic invasive species are programs such as the effective Clean, Drain, Dry campaign launched by the Canadian Council on Invasive Species. Similar programs exist in different jurisdictions across the country, so be sure to check the local regulations for the exact requirements. For the most part, though, they all follow the same meticulous, methodical approach to ensure your fishing boat is free of invasive aquatic species.

Start by removing any mud, plants and organisms such as zebra mussels from your boat, motor, trailer and gear, including nets, bait buckets, coolers, tackle, ropes, buoys, PFDs, anchors, totes and so on. A pressure washer with an output of 2,500 psi or more of hot water is best for cleaning watercraft. Of course, using a pressure washer at a boat launch is typically unrealistic, so use a stiff-bristled brush instead to break up any crusted material, following by a good scrub with a rag and a rinse of clean water. Boats that have been moored in a marina will require extra work.

Always clean your boat away from storm drains, ditches or gutters that may lead back to natural waterways. In the same token, do not use a car wash; if invasive species are present, you could unwittingly introduce them into another habitat via a wastewater retention pond.

Finally, conduct a visual inspection of the boat and trailer. Examine drain holes, transducers, motors and propellers, ensuring everything is clean before you leave. Pay special attention to the trailer, which can have numerous nooks and crannies that will hold plants and critters.

Before leaving the lake, also drain all water from bait buckets, ballasts, bilges, coolers, internal compartments, livewells and the motor. When possible, flush these water-holding areas with hot tap water, away from waterways; sponge up any remaining standing water. Leave drain plugs out during transport to ensure complete drainage—in most jurisdictions, that’s the law. As for canoes, kayaks and other non-motorized watercraft, tip them over to drain, and open up any compartments to air-dry.

Allowing your watercraft, trailer and gear to dry out for at least five days before you visit another waterbody is the best—and preferred—practice. Out of the water, invasive aquatic species are as good dead, given enough time. Open the lids on all compartments, allowing them to completely dry. When storing your boat, raise the bow to allow the bilge to thoroughly drain and dry. Do all this, and you will have played an important role in the ongoing battle against invasive aquatic species.