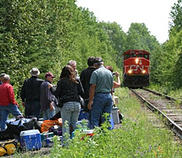 Is it the end of the line for an iconic train service in northern Ontario?

Time is running out for the Algoma Central Railway. The passenger train service that runs from Sault Ste. Marie to Hearst is slated to close at the end of April. CN Rail, which owns the ACR, reportedly decided to pull the plug earlier this year when the federal government cut off the $2.2 million subsidy used to operate the service.

The passenger line is popular among anglers, hunters and other outdoor sport enthusiasts who use it to reach rail-access-only lodges, outfitters, private camps and more. “This is another devastating blow to the tourism industry in Algoma,” says Ian McMillan, director of Tourism Sault Ste. Marie.

The closure is being challenged by the Coalition for Algoma Passenger Trains—a not-for-profit group of individuals, municipalities, First Nations, businesses and other stakeholders who recognize the significant social, economic, cultural, historical and environmental value of northern Ontario’s passenger trains. The group is hoping for a one-year extension to give stakeholders an opportunity to come up with long-term options that will keep the rail service viable. To that end, it’s asking anyone affected by the upcoming closure to complete an online survey before March 23.

The survey will be used to draft an economic impact assessment of the service.

It’s not the first time that the ACR has been threatened. Stakeholders managed to prevent its cancellation in 1995, when the service was scaled back.

Lodge owner Al Errington, who runs Wilderness Island, a resort on the ACR rail line, says the closure could spell the end of his operation. “This can put me out of business,” he told the Kapuskasing Times. “Right now I have 400 people booked for summer and no train.”

For more on the issue go here.