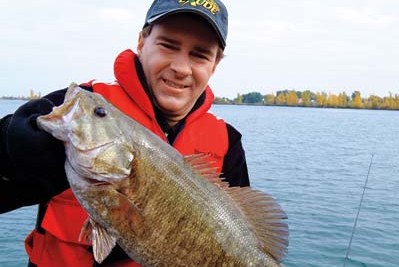 Long, narrow and deep, Memphrémagog straddles the U.S. border, with three-quarters of the lake in Quebec and the southern tip in Vermont. You have to feel some l’amour for a lake that promises a veritable smorgasbord of great fishing, especially when it’s just an hour’s drive east of Montreal. While the plentiful trout and chunky landlocked salmon get most of the attention, Memphrémagog’s bassing is good enough to attract major tournaments.

When to fish: Ice-out is best.

Where to fish: Key in on sandbars and dropoffs near Vale Perkins.

When to fish: Action is consistent throughout the season.

Where to fish: Near Vale Perkins, work the shallows in spring, and the lake bottom as the season progresses; also jig sand and gravel bars.

Tip: Troll small cranks near the surface in the spring. Later in the season, use spoons or jig with Berkley Power Grubs or bucktail jigs.

When to fish: July is best.

Where to fish: Stick to Fitch Bay and key in on heavy cover.

When to fish: All season.

Where to fish: Work the sandbar mid-lake off Owls Head Mountain.

Tip: Slow troll just off bottom with Williams Dartee or Mooselook spoons, or work along the bottom with leadcore and streamers.

Landlocked Atlantic salmon; The chance for a record-class fish

When to fish: Late June to early August.

Where to fish: Fish the foot of Owls Head Mountain at the sandbar, and deeper as the season goes on.

Tip: Quickly troll spoons, such as the Mooselook 140 or 160 series and the Williams Dartee, or streamers behind dodgers.

When to fish: June through August.

Tip: Quickly troll spoons, such as the Mooselook 140 or 160 series and the Williams Dartee, or streamers behind dodgers.

When to fish: Late June through July is prime.

Where to fish: Focus on weedlines, points and rocky structures.

When to fish: Mid-June to early July.

Where to fish: Shallow, rocky shorelines.