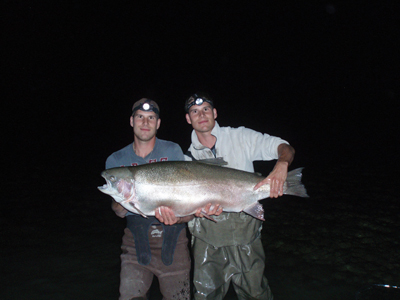 In 2011, Best for world-record rainbow trout

It started accidentally 16 years ago, when a half-million rainbow trout escaped from a fish farm on southern Saskatchewan’s Lake Diefenbaker. By 2007, the sterile triploids had grown to sizes beyond anyone’s imagination. How big? Well, twins Adam and Sean Konrad have notched up six International Game Fish Association line-class world records since 2007, including the all-tackle world record, a 48-pound monster caught in 2009. Angler Roger Remaley holds yet another rainbow line-class record out of Diefenbaker. His guides? The Konrads.

Sure, these records may be tough to beat, especially considering the escapees are quickly reaching the limits of their expected lifespans. That said, a fair number of giants are still prowling the waters of Lake Diefenbaker and they just keep growing bigger. Somewhere out there is a whale of a rainbow on the lam, well over the half-century mark.

And while you’re hunting for the next record, this 225-kilometre-long impoundment of the South Saskatchewan River also offers fishing for trophy walleye and northern pike. I’ve seen marble eyes weighing well over a dozen pounds cruising the shallows of Coteau Bay during the spawn, for example, and I’ve hooked into heavy fish just off the drop at Pumphouse Point come May. The lake is just that big and rich enough to support no end of bragging-sized fish.

In 2010, Rainbow trout; The last two world-record ’bows have been caught here

When to fish: September and October.

Where to fish: Key in on shallow water close to shore.

Walleye; Good numbers of fish with the chance of catching a 10-plus pounder

When to fish: June and July are prime.

Where to fish: Focus on shelves in nine to 16 feet of water in the evening.

Picture this: You’re sheltered against the buffeting ground wind, still cool from the morning frost. You hear the sing-song flutes and yelps of approaching white-fronted geese from the far corner of the stubble field, and instinctively duck out of sight. But then you catch yourself, grin and enjoy another sip of coffee, still hot from the Thermos bottle. You can allow yourself the luxury. After all, you’ve already limited out on dark geese—whitefronts by preference and four Canadas to top up the quota of eight. And though you’re still short your limit of 20 white geese, you’ve already taken all you care to.

Far-fetched? Actually, no. That’s a fairly common experience during October when wave after wave of tundra-nesting geese show up in Canada’s heartland to feast on windrowed crops. Among them are upward of 700,000 whitefronts (known locally as specklebellies or barbellies) and, to sweeten the pie, big Canada geese and countless puddle ducks proliferating the potholes. Do your scouting to locate the field where the hosts are feeding, set up before first light and, if nothing goes awry, the shoot will be spectacular.

That goes for most of southern Saskatchewan and well into southern Alberta, but the greatest concentrations are around Lake Diefenbaker, southwest of Saskatoon. Canadian residents can hunt on their own, but this is privately owned land so you’ll need permission. For newcomers to the game, hiring a guide or outfitter is a great way to button up a memorable hunt.

Check out: 2011 game forecast for Saskatchewan