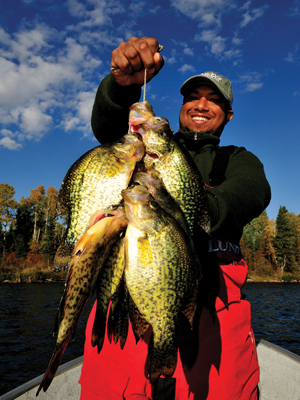 Lake of the Woods

What can you catch on northwestern Ontario’s Lake of the Woods? Practically whatever you feel like. Covering one million acres, with 100,000 kilometres of shoreline (that’s more than Lake Superior) and dotted with 14,000 islands, it’s no wonder this huge, pristine lake has such fabulous fishing. Still, the variety, size and numbers continue to amaze. In fact, this 10-time hot spot could well be the world’s best water for walleye, muskies, crappie and several other species.

In 2011, Best for multiple species

Having lived on her shores for almost 40 years now, I have to say northwestern Ontario’s Lake of the Woods is in my soul. The massive sweetwater lake, tucked along the Manitoba and Minnesota borders, offers more than 100,000 kilometres of shoreline to explore thanks to some 14,000 islands. And swimming beneath the surface are more than 47 species of fish, from gigantic lake sturgeon and huge northern pike to plate-sized crappies and jumbo yellow perch.

Many contend Lake of the Woods is the finest walleye fishery in the world, while others make the same claim for her crappies—my biggest was a two-and-a-half-pound trophy. But why stop there? It was within sight of the boat launch in downtown Kenora, for example, that I caught my biggest muskie, a 57½-pound whopper. And it was on Lake of the Woods that I hooked my biggest winter lake trout, a 50-pound-plus goliath, before she snapped my line as if it were thread.

As for the bass, I’ve caught largemouth topping six pounds and so many four-pound-plus smallies I’d need a calculator to keep count. And the pike are so plentiful they bite off your lures when you’re casting for other species—my biggest northern so far was 50 inches long. A good day of jigging for whitefish in the winter, meanwhile, will see more than 100 fish caught and released. Enough said.

In 2010, Best for walleye; Great Numbers of decent size fish.

When to go: All season long

Where to fish: Rocky points, gravel beds and deep weedlines all produce.

—Mike Asher, a manager at Cabela’s Canada in Winnipeg.

Muskie; A trophy-class fishery with great numbers of fish

When to go: The entire season

In 2009, Muskie; One of the best muskie lakes in Canada, with lots of structure that big fish prefer; 50-plus-inchers are not uncommon

When to fish: Mid-July through mid-September is prime.

Where to fish: Focus on rocky or weedy points and underwater structure in Whitefish and Sabaskong Bays.

In 2008, Pike; Lots of action and the potential for 40-plus-inchers

Where to fish: Saddles between islands and rocky points.

Tip: Use big baits, and vary the speed of your presentation until you find the right one.

Muskie; Outdoor Canada’s fishing editor, Gord Pyzer, has personally shown me what a world-class muskie fishery this is

When to fish: Late fall is best for the biggest fish.

Where to fish: Bottlenecks between points and islands, and around points and shoals.

When to fish: The first six weeks after ice-out.