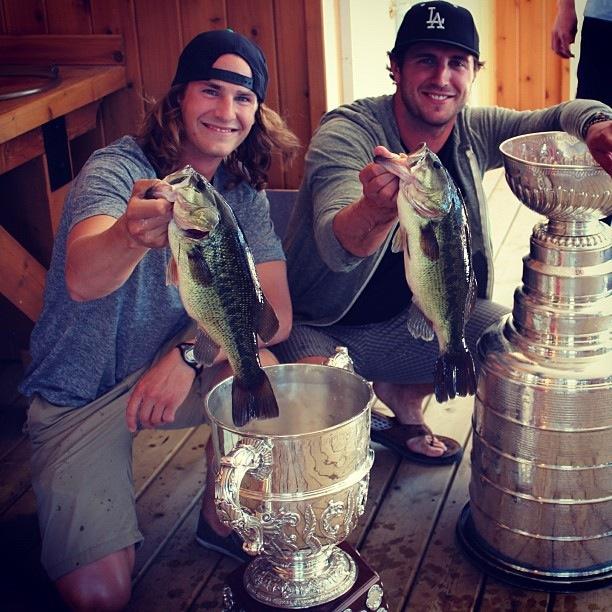 The Stanley Cup, emblematic of hockey supremacy, is the oldest trophy of all the major league sports. And it has a befitting history.

First presented by Lord Stanley of Preston, the Governor General of Canada in the late 1800s, it has since been barfed and urinated into, used as a flowerpot, and a bowl to feed a Kentucky Derby winning horse. It has been drop-kicked into the Rideau Canal, paraded through a strip joint, and lovingly kissed and fondled by every member of every winning team in its illustrious 116-year-old history. Marty Brodeur even used it to serve up popcorn.

Today, the Cup is guarded by security personnel wherever it goes, and it goes to a lot of places around the world. Indeed, tradition has it that every member of every winning team gets to take the Cup home for a local celebration. This year, that included Kenora, Ontario, home of local hockey super star Mike Richards. Mike displayed the Cup downtown at the Harbourfront Pavilion last weekend, where local folks turned out in droves to touch and kiss the beloved Cup and to get their picture taken with it.

After the public celebration was over, Mike and a few friends took the Cup back to his cottage on Lake of the Woods where they gathered around the trophy and took some, let’s say, interesting photos.

The one below is of Mike and buddy Ben Gustafson, who happened to come second (alongside his dad) in the three-day Kenora Bass International. Mike also fishes the KBI and, well, he didn’t fare quite as well on the water as he did on the ice this year.

Still, is there any image more uniquely Canadian than this?