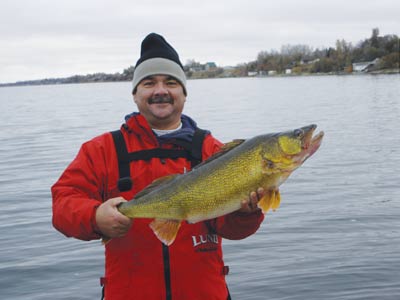 Just north of Regina, at the head of the Qu’Appelle Valley, Last Mountain Lake has the kind of fishing you’d expect from southern Saskatchewan’s largest natural waterbody. This long, narrow prairie lake can be intimidating, but walleye here routinely top 12 pounds, the pike go over 30, and if you know where to look, the action is hot all season. There’s also an unsung population of enormous carp that is attracting European anglers.

When to fish: Mid-February through March.

Tip: Jigging spoons or swimming lures tipped with half a minnow are quite effective.

When to fish: Spring and summer are best.

Where to fish: In spring, fish the channel flowing into the lake; in summer, work the back bays.

When to fish: Early spring is prime.

Where to fish: Fish Little and Big Arm Bays, and near Last Mountain Regional Park.

Walleye; Eight-, nine- and 10-pounders are common and there’s the chance at a 12-plus trophy

When to fish: Fall is best.

Where to fish: Fish Fox, Rowan’s and Pelican Points, as well as near Glen Harbour Resort; break line leading to points are also productive

Tip: Jigs, live-bait rigs, jigging spoons, blades and cranks can all be effective.

—Rob Furutani, a tournament angler for 15 years and president of the Saskatchewan Walleye Trail