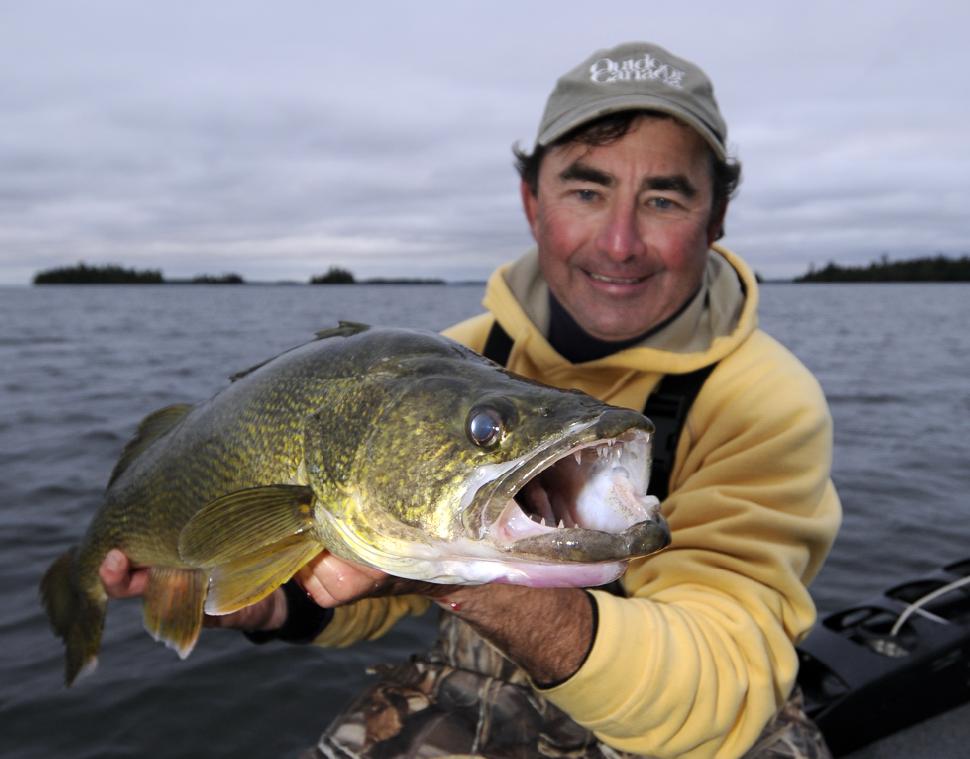 Lighten up for walleye

We smacked a ton of nice fish, including a score of head throbbers in the six- to eight pound range.  And we spent all of our time fishing during the hot, sunny, mid-day hours.

I mention the timing for a reason, because I also received an e-mail message from an Outdoor Canada reader in the States, who had been on a fishing trip to Quebec and he … “was amazed how the fishing would get quiet from 10:00 am to 6:00 pm when the sun was high.  I know that the sun plays a lot in their timing and  feeding, but how do you get them to start feeding at this time or is it a lost cause?”

As I have written about several times, and discuss often at seminars, no other fish comes by its name more honestly than the walleye.  Their big, white, distinguishing eyes are magnificent physical adaptations that allow the fish to take full advantage of unique niches and opportunities in their environments.

Indeed, when you understand just how important eyesight and vision are to a walleye, you are well on your way to understanding just about everything you need to know about the species.

The key to the walleye’s amazing sense of sight is the presence of a condition called tapitum lucidum.  These are the millions of reflective, glitter-like particles that coat the retina of the eye – the screen upon which walleye focus visual images.

It’s because of this condition that scientists refer to walleye as being negatively phototactic.  Unlike humans, who are positively phototactic and can see much better during the day, walleye behave in the opposite manner.  They are crepuscular or nocturnal feeders, coming alive at night when the sun goes down.

The tapitum lucidum therefore, is like a mirror.  It traps and reflects the tiniest fractions of light and lets the walleye see at levels impossible in most other animals.   In fact, a walleye can gather so much light in its eyes, that it routinely seeks out and prefers shadowy conditions.  Conversely, walleye generally abhor continually bright environments.

Dr. Dick Ryder a renown walleye scientist who worked for the Ontario Ministry of Natural Resources was among the first to demonstrate that light levels control just about everything a walleye does.

Ryder researched the effect of light on walleye activity for more than 15 years and during this time, he spent over 1000 hours under water, visually monitoring the fish in six Northwestern Ontario study lakes and four rivers.  He wanted to prove his thesis that it is the rapid change in light levels – at dusk and dawn – that trigger walleye feeding patterns.

As part of his rigorous scientific protocol, Ryder dove only between 10:00 AM and 1:00 PM and only on bright, sunny days.  He took surface and subsurface light readings every half-hour with an electrophotometer, and entered the water only when the readings were within a narrow range.  This eliminated the external effects of wind and cloud cover.  In order to minimize the impacts of other parameters, Ryder kept meticulous notes on current speed, bottom depth and cover – and of course on walleye activity levels.

Based on his catch-per-unit effort, Ryder showed that walleye feeding peaked 30 minutes before sunset.  That is when he caught fully 90 percent of his fish.  He was careful to note, however, that his drop in success after this sunset period was more likely related to his method of fishing than on a decline in feeding.  Ryder’s most studied shoal topped out in 23 feet of water and he acknowledged the fish likely remained active, but moved into shallower water.

Indeed, Ryder demonstrated that as bright daylight diminishes, it reaches a level walleye find optimal.  However, as the light level continues to drop after sunset and to fall below the walleye’s preferred level, the fish have two options whereby they can prolong and maximize their time … or bask  … in the glow of ideal light.  They can move to shallower water, following their preferred light level or they can suspend up off the bottom, rise vertically, and accomplish the same thing.  In fact, Ryder observed both types of behavior, and caught feeding walleye at night when he moved into water as shallow as three feet.

By the way, Ryder discovered there were no seasonal differences or changes.  He found that walleye reacted the same way … turning on at dawn and dusk … in the winter.  Even though winter light levels were typically only 10 percent of summer levels.  So the amount of light clearly wasn’t the trigger.  The stimulus for walleye to become active, regardless of the season, was the rate of change of light intensity.

So, does this mean you can’t catch walleyes in the daytime?  Of course not.  In fact, as Gary and I proved this week, you can enjoy great success during the daylight hours.

However, your best bites will likely occur on overcast days, when the wind is blowing, or when the water is stained or filled with algae.  Notice these are all conditions that mitigate against bright light and bring levels down to what the walleye find more ideal.

Here is something else to keep in mind.  River walleye anglers have long contended their fish react differently from still-water walleye and Ryder proved that to be the case.  He found that walleye living in current areas were much more likely to be active at mid-day than fish in non-current locations.  Rivers, then, are great daytime walleye equalizers.  So, too, are river-like sections in lakes and reservoirs.  Channels, slots, neck-down areas, constrictions and bottlenecks where wind induced currents have a chance to set up.

At the other end of the spectrum are those tough as nails, clear water walleye lakes, rivers, reservoirs, pits and ponds.  Make them shallow and devoid of structure and cover, and fish them only during the day, and you’ll leave the water most times wondering if there’s a walleye in the drink.

Almost as difficult are the deep, transparent lakes and reservoirs where walleye swim with lake trout, cisco and whitefish.  Here they can use deep water to retreat from the light, making daytime fishing mighty tough.