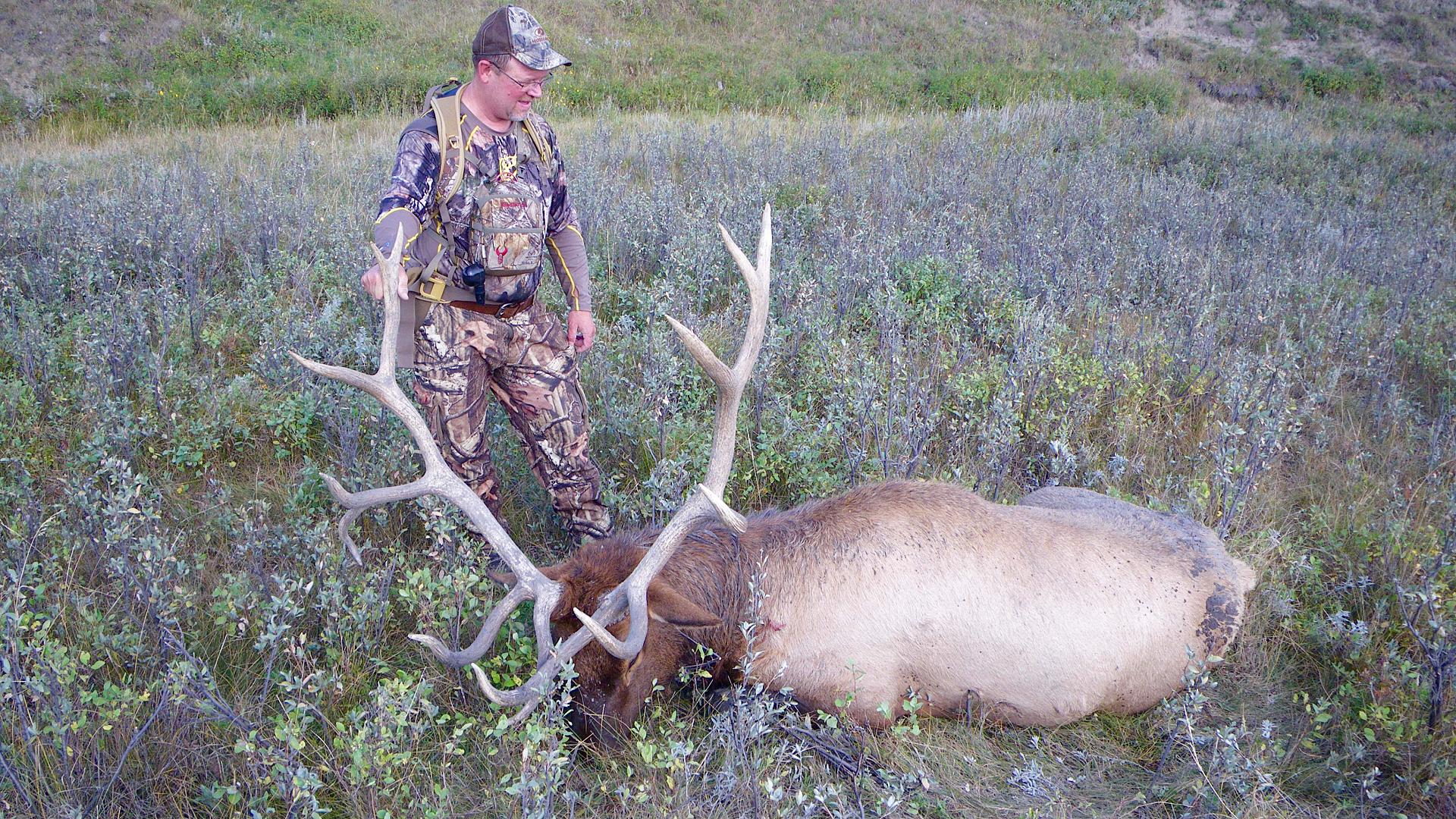 Giants of the grasslands

Alberta’s prairie country is home to massive trophy elk, making for a challenging hunt all its own

Surrounded by fescue grasslands as far as the eye could see, I focused my scope on 40 elk roughly three kilometres away. Fast-forward two and a half hours of coulee climbing and I was finally directly above the bull I wanted. I knew I had to see the herd before it saw me, so I slowly edged forward, slithering a couple of inches at a time on my belly until I spotted the bull’s antler tips protruding from the tall grass.

When I finally had a clear shot about 55 metres out, I found the dark hair on the giant bull’s neck, followed it back to where the tan hide covered the shoulder, placed my crosshairs and slowly engaged the trigger. The crack of my .300 Win. Mag. echoed through the draw, and the bull fell into the grass, its huge antlers reaching high in the air.

Sporting a non-typical tine growing off the third antler point, that prairie bull was the biggest Alberta elk I’ve ever taken. That alone made it a significant hunt, but the experience also illustrated how these giants have returned to make the prairie habitat part of their home range once again—and that’s good news for hunters looking for a fresh challenge. To also score big on a grassland bull elk, here’s where you need to go, and what you need to know once you get there.

Southern Alberta has unique grasslands stretching from the foothills in the west to the Cypress Hills in the east. This broad region is the only spot in North America where all three species of rough fescue—plains, foothills and northern—have colonized. Fescue offers great protein and digestible carbohydrates, making it superior feed for both wildlife and livestock. Mule deer, whitetails and elk all thrive on the productive open plains, where they’ve been expanding in greater numbers.

The region of southern Alberta where the elk have recolonized their historical range is often referred to as the Milk River Ridge. It’s a 1,663-square-kilometre area along the Montana border, named after the Milk River, which flows through it. You’d think hunting prairie elk there would be easy, but the rolling terrain—with wetlands, glacial spillways, deep winding ravines and intervening ridges—creates the perfect maze for elk to hide in. One minute you see them, the next you don’t.

A look through the Alberta Wildlife Trophies and Boone and Crockett records shows strong trophy potential from these grasslands. In recent years, the region has dominated the records and has continually produced some of the biggest elk harvested in Western Canada. Bulls scoring 360 to more than 400 inches on the Boone and Crockett system are taken annually.

How good is the hunting? Every year, the Alberta Fish and Game Association raffles off a Minister’s Special Licence for a resident hunter, and sells a similar permit at the Wild Sheep Foundation convention in the U.S. The winner and top bidder often hunt these prairie areas in search of a once-in-a-lifetime trophy bull, and they’ve never been disappointed.

The story not being told about prairie elk is that there are herds in most of the wildlife management units across southern Alberta. These are much smaller and fragmented groups, not drawing the attention or ire from surrounding landowners. Many of these animals may have come from Canadian Forces Base Suffield near Medicine Hat, but some have also migrated out of the foothills and up from Montana.

Elk are big, heavy-boned animals that can be hard to knock down. Add the high potential for a long-range shot in open country and it can be difficult to choose the right calibre for the hunt. I like a .30-calibre round, as it delivers the knockdown power needed. Some will argue a 7mm Rem. Mag. or WSM will work just as well and provide flatter trajectory. The bottom line is, you need a rifle that will shoot a cartridge and bullet with superior kinetic energy, and one that you can shoot accurately.

Bigger critters, such as elk and moose, require a bullet that will hold together and release as much energy as possible in the animal. If you were to use a deer bullet, which expands very quickly, it’s likely to break apart too quickly before penetrating far enough. Controlled-expansion bullets provide modest expansion, and at the same time retain almost all their weight. These are the bullets you want to plow through thick hide and even bone, and still hold together to get the job done.

There are two types of controlled-expansion bullets: the conventional ones with lead cores and heavy, bonded copper jackets, and the newer bullet designs that are all copper or copper alloy. With the cost of metals today, a solid copper bullet can be pricey, but they’re very effective. A premium bullet will retain 90 per cent or more of its total weight, and it’s the maintained weight that ensures proper penetration every time. For my massive prairie elk, for example, I used a 180-grain Federal Premium Power-Shok Copper bullet, which is a hollow-point copper projectile that creates large wound channels with consistent expansion.

Clear, variable-powered riflescopes are also essential. You can debate the long-range components, such as the reticle, turrets and first or second focal plane, but the most important thing is you must have an excellent-quality scope that you can consistently shoot with. And that includes dealing with prairie winds, longer distances and, likely, shooting from the prone position. Today’s riflescopes often cost more than the rifle, but you get what you pay for.

If you’re an avid elk hunter, you’ve no doubt muscled your way up some steep, wooded ridges to locate your quarry. In forested regions, elk often reside in the meanest tangle of alders they can find. In heavy timber, the best strategy is to locate elk in an area with an adequate line of sight to make a shot possible.

Hunting prairie elk, on the other hand, is more like hunting antelope. You need to figure out how to get within shooting distance without being seen, smelled or heard. A herd of 40 elk has 80 eyes that never stop scanning for potential danger, and any movement seems to grab their attention. Then there’s the challenge of getting past mule deer that can bound from cover and blow out a herd of elk quicker than you can blink.

For the most part, the open-country approach is fairly straightforward—get out early in the morning, find the highest vantage point, then sit tight and glass the horizon for any sign of movement. It isn’t unusual to have elk appear out of nowhere as they come out of draws and coulees and travel to preferred bedding and feeding areas. They can also disappear as fast as they appear, so it’s essential to make good mental notes of where you last saw them. Be sure to bring a good-quality spotting scope so you can get a better look at elk from a distance.

There are very few roads or trails on the prairies, and most landowners don’t want vehicle traffic off established routes. Elk will often be several kilometres from where you must park, so the hunt then becomes a critical game of translating the geography you saw from your vantage point to your approach on the ground. For example, there are often deep coulees carved into the prairie that you must traverse to get to the animals you marked. It can be a challenging stalk if you aren’t familiar with the terrain, and one wrong move could put you off track or upwind of the herd. It’s like playing a game of chess, deliberating each and every move and trying to think of what could go wrong before taking the next step.

But all the while planning on making sure things go just right.