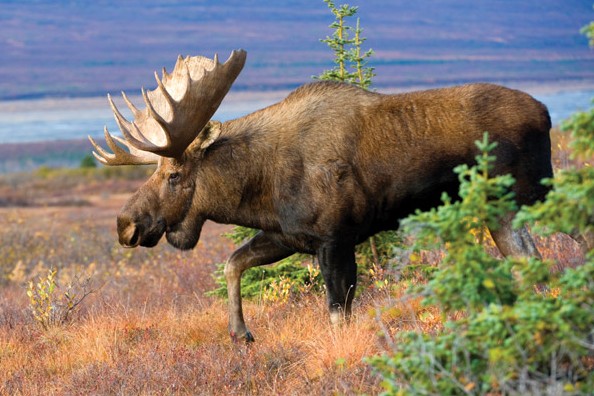 These animals are huge, but you don’t realize just how huge until you see one in the wild, awed by its sheer mass, the breadth of its heavy-beamed antlers and the other-worldly beauty of its surroundings. There are no exaggerations here. The Alaska-Yukon moose—designated as Alces alces gigas—has been moulded into as big an animal as the habitat will allow. Bulls typically stand more than six feet tall at the withers, measure 10 feet long or more and, at maturity, weigh upward of 1,500 pounds. The antlers, with their distinctly palmate brow palm, can spread as much as seven feet—though between five and six feet is most common—and weigh between 45 and 65 pounds. The stronghold of these giants is, as the name implies, Alaska and Yukon. Outnumbering humans two to one, about 70,000 moose call the Yukon home, with some of the best hunting along the 320-kilometre-long Macmillan River, roughly 265 kilometres northeast of Whitehorse as the crow flies. Access is by way of the Klondike Highway, which meets the Pelly River at Pelly Crossing a short distance downstream from the confluence of the Macmillan, or via Canol Road, which crosses the South Macmillan north of Ross River. The outfitter operating on the Macmillan shuttles hunters in by single-engine aircraft for both river hunts and horseback trips back from the river. Yukon residents have the option of hunting on their own or taking a guided hunt, but Canadian non-residents will need to either hunt with a resident hunter-host (only once every three years) or a guide-outfitter.