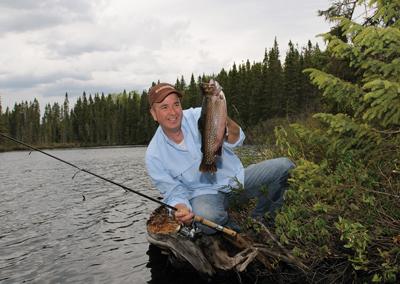 Hottest spot: The bays and around the northern islands

The trees lining Mistassini may be stunted, but the lake’s fish sure aren’t. A 10-hour drive northwest of Montreal, Quebec’s largest natural lake boasts plentiful walleye, plus trophy-calibre brook trout, lakers and pike—a rare mix this far north. On a June day, it’s possible to troll for double-digit lake trout, throw spoons at huge, voracious pike, then spend the evening casting dry flies for four- to six-pound brookies cruising the mouth of the famous Rupert River.

In 2011, Best for brook trout, along with lake trout, walleye and pike

Not only is Mistassini Lake the largest natural lake in Quebec, it’s also home to trophy-calibre brook trout, lakers, pike and walleye—a rare combo for such northern waters. And since the lake feeds one of La Belle Province’s legendary brook trout rivers, the Rupert, it’s not surprising that hefty brookies are the prized catch.

There are hundreds of great spots to catch these northern fish, weighing three and a half pounds on average, throughout the 161-kilometre-long lake, which forms part of a provincial wildlife reserve. Since the trout are very easy to spook, the best tactic is to troll far behind the boat. The good old Original Floater Rapalas work like wonders. Always keep in mind that when you catch a big Mistassini brookie, there are typically at least two or three other bigger fish following along that can weigh up to eight pounds.

The brook trout aside, the most abundant fish on the lake are lake trout—trophies tipping the scales at 25 pounds are not uncommon. Trolling and jigging will also produce big numbers of decent walleye, and if you’re a northern pike fanatic, you’ll have many chances to catch fish over the 20-pound mark. That is, of course, if you can draw yourself away from Mistassini’s coveted brook trout.

When to fish: Early to late June.

Where to fish: Very shallow shorelines with big rocks and rubble.

Tip: Cast or troll small spoons or Syclops around big rocks and drop-offs, or cast small streamers or Muddler Minnows.

When to fish: June and July.

Where to fish: Along weed/reed edges, near shorelines in small back bays and the narrows between them, or in streams.

Tip: Quietly cast spoons (such as the Forage Minnow, Moss Boss or Silver Minnow), large topwater spinner blades (such as the Bionic Bucktail) or streamer flies.