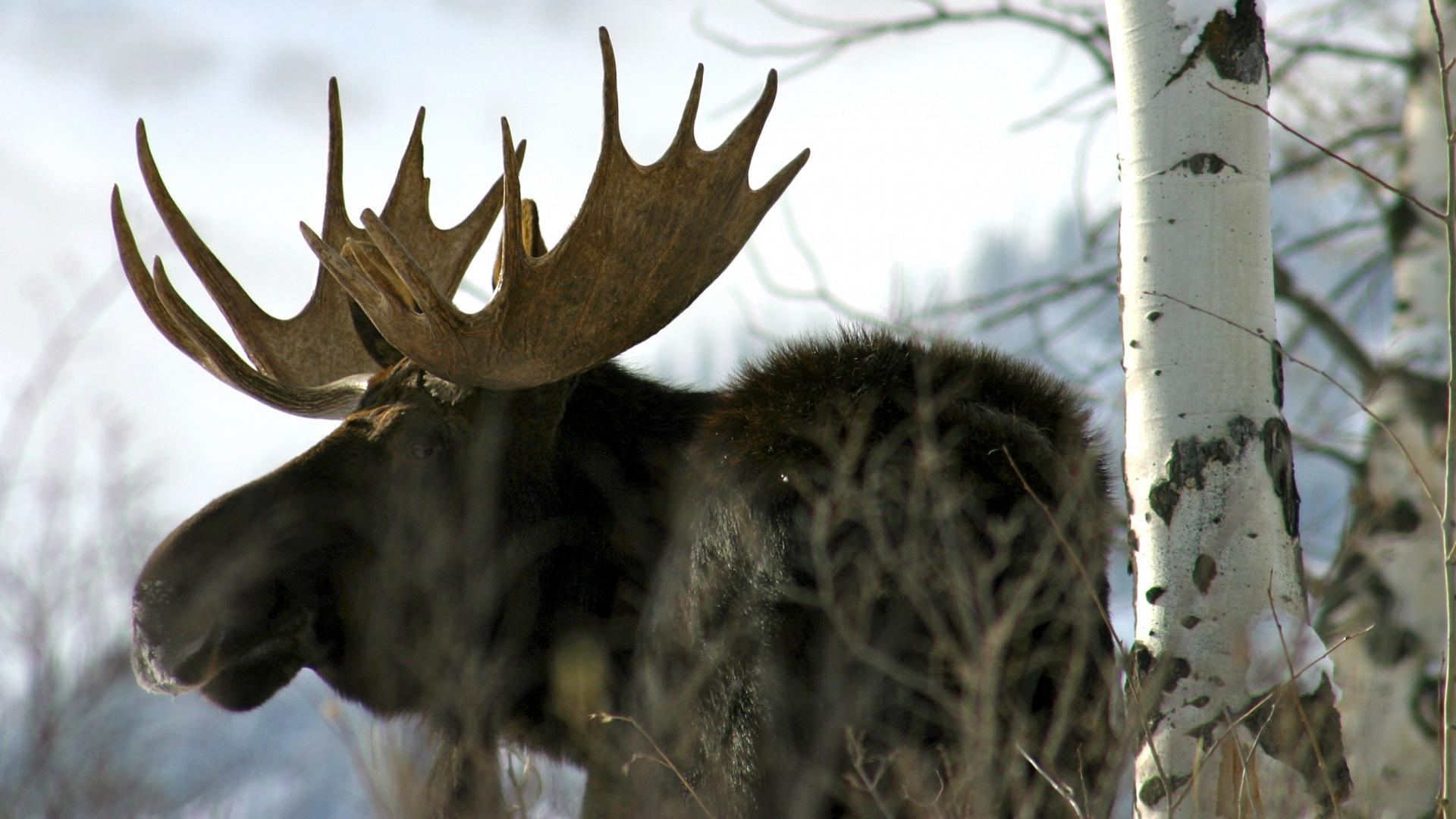 The best cartridges and bullets for toppling big moose

What’s best for toppling big bulls? It all depends on where and how you’re hunting

Standing up to seven feet tall at the shoulders, moose are a giant walking contradiction. They’re heavily muscled and thick-boned, and can weigh up to 1,500 pounds, making them the largest member of the world’s deer family. But they also have a reputation for being relatively soft, quick to succumb after getting shot, particularly when compared to their smaller elk cousins.

Perhaps it’s not surprising, then, that hunters regularly employ a wider range of cartridges for moose than they do for any other big-game animal. And here we’re talking about everything from the .264 family on up to the .338s, and even the .375s. Many moose have been taken with all of these, along with several others, both larger and smaller. But what’s the ideal class of cartridges, and bullet, for hunting moose?

Before answering that, it’s important to point out that bullet placement is the single most important factor when it comes to knocking down a bull. Hit a moose in the paunch with a .460 Weatherby and it will run off wounded, creating a challenging tracking exercise because of the lack of a strong blood trail. Conversely, if you slip a .223 between a moose’s ribs and into its heart, it will most likely go down within 100 yards. This doesn’t mean the .460 is a poor cartridge choice or that the .223 is a suitable one—it simply means that a well-placed shot, with virtually any bullet, is more important than all other considerations.

Even so, some cartridges have proven themselves more effective than others. But to identify the best choices, you first need to take into account all the variables that can affect the cartridge’s performance. The same goes with the bullets (see “Best bullets” below). And as you’ll see, the choices are as disparate as the moose-hunting scenarios across the land.

Not all moose are created equal. The Yukon-Alaska subspecies is substantially larger than the Shiras moose found in southwestern Alberta and southeastern B.C., with adult bulls in the Yukon weighing potentially twice as much. Across the rest of Canada, moose generally fall between the two in terms of size.

Considering a bullet’s job is to penetrate the vitals of an animal, it’s clear that body mass will influence your choice of cartridge. Those fortunate few who have the opportunity to hunt the largest of the large moose in the Yukon, the N.W.T. or the extreme north of B.C., for example, will need a little more firepower than other hunters require. 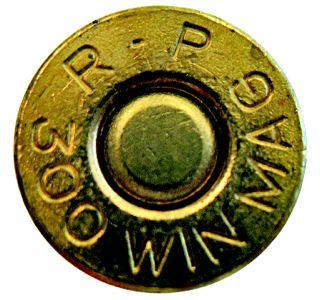 Unless you’re a resident of those northern locales, you’re probably paying a large sum for a defined period of hunting time, and that means you don’t have the luxury of waiting all season long for the perfect shot. And although typical shooting distances at moose anywhere are generally less than 200 metres, your only opportunity may be at a greater distance or at a less than ideal angle. As such, you’ll appreciate a cartridge that carries plenty of energy downrange.

Any of the .300 magnums and the .338 Win. Mag. are popular in this setting, but they should only be carried by hunters who can withstand the significant recoil, as well as be able to shoot them accurately and confidently. Keep in mind that the .300 Win. Mag. (above) has 30 to 40 per cent greater recoil than the .30-06, and the .338 Win. Mag. launches its pills with about 60 per cent greater recoil than the .30-06.

In Outdoor Canada’s 2010 survey of 75 moose guides from across the country, 35 per cent listed the .300 Win. Mag. as their top choice for the best moose cartridge, although several noted it was only their top choice if the hunter could handle the associated recoil. Following close behind was the .30-06, with 29 per cent of the outfitters listing it as their top choice. Busy guides see as many moose shot in a season as many of us do in our lifetime, so their recommendations should not be taken lightly.

The Canada moose of the provinces, from Newfoundland and Labrador across to B.C., while still large animals, are not nearly as imposing as their northern neighbours. These are the moose of the average hunter. While the landscapes these animals inhabit can vary significantly—from muskeg and dense forest to alpine basins and river valleys—the hunting methods and appropriate cartridges are similar.

During the rut, calling is the preferred tactic and shots usually range from 100 yards at the outside to near point-blank. Before and after the rut, spot-and-stalk is the usual method. While circumstances occasionally call for a long shot, when there’s no way to close the gap without spooking the bull, it’s generally pretty easy to stalk to within 200 yards of a moose. This provides considerable liberty in your choice of capable calibres. 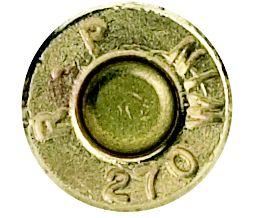 Over the years, it’s safe to say that the .30-30, .303, .308 and .30-06 have accounted for the vast majority of downed moose, and they continue to be popular choices. They’re all middle-of-the-road calibres that, when pushing quality bullets at modest velocities, are more than adequate under most circumstances. Other effective calibres in the same class include the .270s (above), the .280 and the 7mm.

For those who can handle more recoil, and are capable of accurately shooting larger cartridges at distances beyond 200 yards, a better selection would be the .300 magnum family. These cartridges offer the benefit of added horsepower if your only opportunity presents itself at extended ranges, or an animal offers only a quartering shot.

In densely forested habitats, or when you know shots are going to be at close range, another class of cartridges become the effective favourites. These are the large-calibre, relatively slow velocity rounds that include the .348 and .358 Winchesters, the .444 Marlin (below)and the .45-70. At close distances, you don’t require maximum velocity; in fact, high-impact velocities on heavily-boned animals frequently have a way of contributing to unusual bullet behaviour and failure. 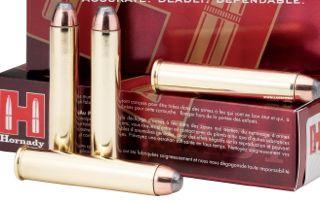 Moose are undeniably large animals, but they’re by no means immortal. Select an adequate cartridge and a well-designed bullet, and keep your shots within the limits of your cartridge and your shooting ability. Any shot into the heart or lungs will result in a moose for the freezer. But all bets are off if you have poor shot placement or a bullet that fails to penetrate.

It’s a great time to be a hunter insofar as bullet choices go. There have never been so many to select from, and improvements in technology and manufacturing processes have translated into better and more consistent performance in factory-loaded ammunition than ever before.

A regular concern with bullets is the price of premium-grade factory loads. Granted, they’re not inexpensive when compared with traditional bullet loadings, but in the context of the total cost of your hunt, they’re still relatively cheap.

Select your bullet based on the most difficult and longest shot you’re willing and able to take. If you’re comfortable shooting a moose when he’s quartered toward you, opting for a premium bullet that can reliably penetrate through bone and thick muscle is worth every nickel. Here are the primary bullet styles to consider. 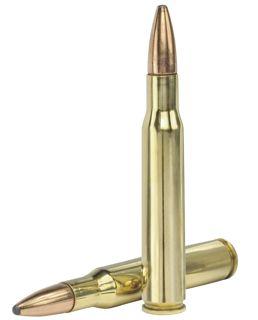 These bullets are typically constructed from a lead core encased in copper or a copper-alloy jacket. The jacket is usually thin at the nose, becoming thicker toward the base to help control expansion and mushrooming—the thin nose expands quickly while the base remains intact longer, ensuring greater retained energy and penetration. Over the decades, these bullets have accounted for untold numbers of moose. Winchester’s Silvertip, Remington’s Core-Lokt, Hornady’s InterLock and Federal’s Power-Shok are just some of the bullets that fall into this category. Traditional bullets are the most economical option, and they’re as effective today as they’ve ever been. They perform best on moose when you have broadside shots at distances closer than 200 yards.

One advancement in traditional bullets is the introduction of what’s known as “bonding,” an electrochemical or mechanical process that fuses the jacket with the core, reducing the likelihood of separation. Bullets that hold together well on impact generally retain weight better, translating into greater penetration. Examples of these bullets include Federal’s Fusion and Trophy-Bonded Tip, Hornady’s InterBond, Nosler’s AccuBond, Winchester’s Power Max Bonded and Remington’s Core-Lokt Ultra Bonded. Designed for increased penetration, this family of bullets is effective both at extended ranges and in instances when you don’t have the option for a broadside shot.

These bullets take an altogether different approach to ensuring bullet weight retention, consistent expansion and increased penetration. They feature a tapered H-shaped jacket, with the bullet’s lead core filling both sides of the H-shape’s crossbar. The design is intended for rapid expansion in the nose half, with no expansion below the crossbar, ensuring consistent weight retention and penetration. As with bonded bullets, partitions really strut their stuff when broadside shots aren’t on the menu. Popular examples include the venerable Nosler Partition, first commercially loaded by Federal in 1974, and Swift’s A-Frame.

Comparatively new on the market are mono-metal bullets. Lead-free, they’re composed entirely of copper or copper alloys. The advantage of these bullets, beyond eliminating lead in the environment, is that they don’t deform or fragment upon impact the way bullets with a soft-lead core do. They also don’t expand as rapidly or as much as lead-core bullets, resulting in excellent weight retention and deeper penetration.

One criticism of mono-metal bullets is that they require high-impact velocities to ensure expansion, which is critical for creating large wound channels. As a result, they’re not considered the best choice when shooting at distances where bullet velocity drops below 2,000 fps. In a typical 180-grain .30-06 bullet, velocity remains above 2,000 fps until nearly 375 yards, beyond which it’s impractical to shoot at a moose anyway.

Barnes pioneered the movement to mono-metals back in 1986 with its X-bullet, and continues to lead the category with its TSX family. Other mono-metals include Nosler’s E-Tip, Hornady’s GMX and Federal’s Trophy Copper. I had the opportunity to shoot the Trophy Copper in Namibia last year and took an eland and a kudu using my .30-06. Both animals were comparable in size to a moose, and both required just a single shot.