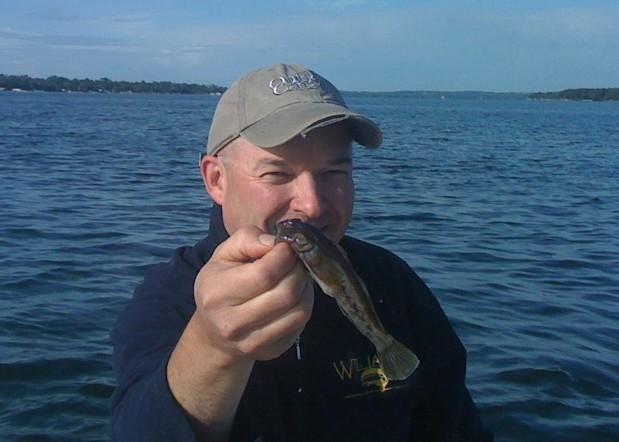 Trophy goby: This guy was so big I could lip him!
BlogsField Findings

On September 11, 2001, while most Canadians were glued to their television sets, transfixed by the unfolding horrors in New York and Washington, I was merrily trolling for salmon on Lake Huron’s Georgian Bay. Not that I didn’t give a darn about the carnage south of the border, mind you.

You see, I had hit the water a full hour before the first Airbus slammed into the World Trade Centre’s North Tower, and my fishing buddy Two Dogs and I remained blissfully unaware of the dramatic, world-altering events until 4:30 that afternoon.

And so, on every 9/11 since then, I’ve made a point of going fishing. Think of it as my personal thumbing of the nose at terrorism. “There’s been much talk about how things have changed, that life on this side of the world will never be the same again,” I wrote a few weeks after the towers came down. “Maybe so, but that doesn’t mean we have to stop living and enjoying our lives to the fullest. As far as I’m concerned, the exact opposite is true. It’s at times like these that we can really appreciate all that the natural world has to offer, including the odd break from our increasingly stressful existence.”

All of which is to say, this past Sunday, September 11, I went fishing. And joining me were my neighbours and fishing buddies, Jon and Pat, and another fishing-kook friend, Gianni. Together, we hit Lake Simcoe on the Outdoor Canada boat, searching out smallmouth bass at Willow Rocks, Jackson’s Point and Roche’s Point. There’s nothing like concentrating on the business end of a fishing line to cleanse your mind of thoughts of just how nasty this planet can be.

In the end, we caught a pile of fish (bass, perch and no end of pumpkinseeds), and a few surprises. My odd catch of the day? A giant round goby that just hammered the Gulp! emerald shiner on my drop-shot rig (see photo at the bottom of this page). Man, they’re getting big. Time will tell what ultimate impact this invasive species will have on Simcoe’s fishery. So far, they don’t seem to be impeding smallmouth bass recruitment, judging by the fact we still managed to catch dinks.

The other nice surprise was a beauty jumbo perch that Gianni hauled in, which I kept, along with three others, for a decent fish fry. The perch was so big, in fact, that we felt compelled to measure it. The length? Eleven inches. How apropos. Thank you, September 11.