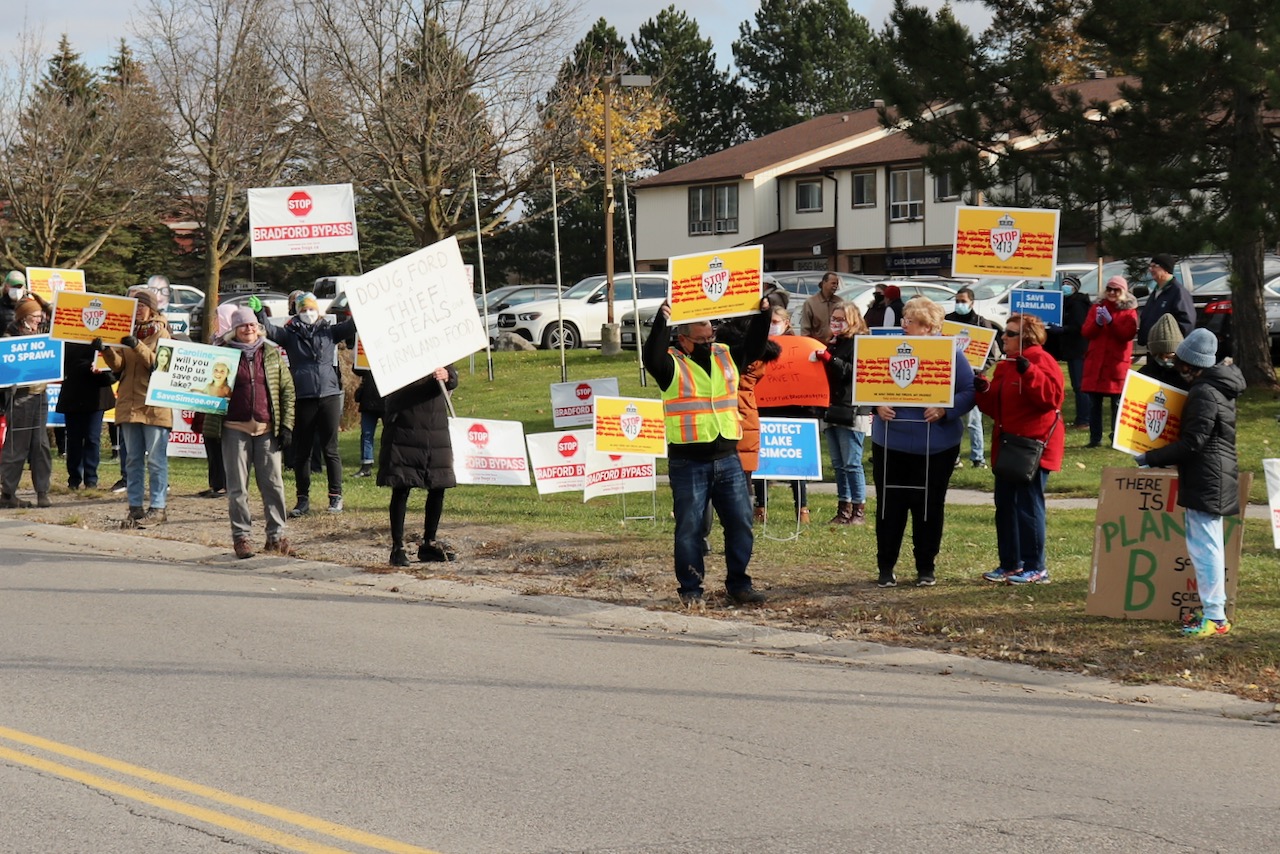 In the face of growing concern and criticism from environmental and conservation groups, Ontario’s Conservative government is forging ahead with plans to build two controversial highways in the south of the province. In early March, Premier Doug Ford said Ontario will spend more than $21 billion on highways over the next decade, including the construction of Highway 413 and the Bradford Bypass, the two projects of concern.

Highway 413 is a proposed transit corridor running 59 kilometres through York, Peel and Halton Regions. Expected to include four to six lanes, the new 400-series highway would have connections to Highways 400, 427, 410 and 401, as well as the 407 toll highway. The planned route cuts through a swath of sensitive ecosystems, watersheds and farmland known collectively as the Greenbelt.

The Bradford Bypass, meanwhile, is a proposed 16.2-kilometre freeway connecting Highway 400 and Highway 404 in the County of Simcoe and Regional Municipality of York. It would cross 27 waterways and cut through the environmentally sensitive Holland Marsh, impacting approximately 39 hectares of wildlife habitat and 11 hectares of wetlands, also part of the Greenbelt. The area is home to 11 species at risk, including amphibians, birds and trees.

GROWTH VS. THE ENVIRONMENT

The province maintains the new highways are needed to decrease existing traffic congestion on other arteries, while providing access to more areas to build affordable housing—and creating thousands of jobs in the process. Many environmental groups, including Environmental Defence, argue this goes against the very idea of establishing the Greenbelt in the first place, which was to limit urban sprawl.

The proposed highways also have many conservation groups, including Ducks Unlimited Canada, sounding the alarm about the environmental consequences. “Southern Ontario can’t afford to lose more wetlands,” reads one DUC statement. “We will pay the price in deteriorating health of the rivers and lakes that we rely on in all areas of life.”

Critics warn the proposed stretch of Highway 413 within the Toronto and Region Conservation Authority’s jurisdiction alone would impact more than 1,000 hectares, which the TRCA categorizes as “important for local wildlife movement.” That includes approximately 85 watercourses, 220 wetlands and 680 hectares of wildlife habitat, all home to 35 wildlife species and 74 plant species of local concern. Ten provincial and/or federal species at risk will also be impacted.

With the province contending it can offset the highway’s negative environmental impacts, the TRCA’s associate director of restoration and resource management, Ralph Toninger, offers an optimistic outlook. “Many older roads were built when green technology didn’t exist,” he says. “We can now go in and create infrastructure with environmental protection front of mind.” That could include wastewater filtration systems for road runoff, the removal of obstructions to waterways and the addition of fish ladders.

IMPACT ON ANGLERS AND HUNTERS

The species at risk that stand to be affected by the highways may not have the same name recognition as lake trout, wild turkeys or mallards, says University of Guelph ecologist Ryan Norris, but anglers and hunters should still be concerned. “It would be a grave mistake to ignore this impact if you enjoy the outdoors,” he says, noting that highway construction will do more than pave over habitat. “It encourages the movement of vehicles, which brings with it increased air, water and noise pollution. It also encourages additional development around it, creating a dead zone for wildlife.”

Groups such as Environmental Defence, the David Suzuki Foundation and some local municipalities have been pushing for federal intervention, hoping an impact assessment will lead to a better understanding of how the highways will positively or negatively impact local communities, ecosystems and wildlife. Last May, the federal minister of Environment and Climate Change Canada determined the Highway 413 project indeed warranted further investigation, and designated it for federal assessment.

Increased development will create a dead zone for wildlife

The province is now supposed to provide initial project descriptions and preliminary environmental assessments to the Impact Assessment Agency of Canada by the end of this year. It’s estimated the entire review process will take five years to complete. Meanwhile, Ontario’s Ministry of Transportation is currently updating the 1997 environmental assessment for the Bradford Bypass, with a report expected in 2023.

For now, southern Ontario’s anglers and hunters will have to wait to learn whose predictions about the future of the Greenbelt and surrounding areas are correct, and how these major infrastructure projects will impact fish and wildlife in the area for years to come.