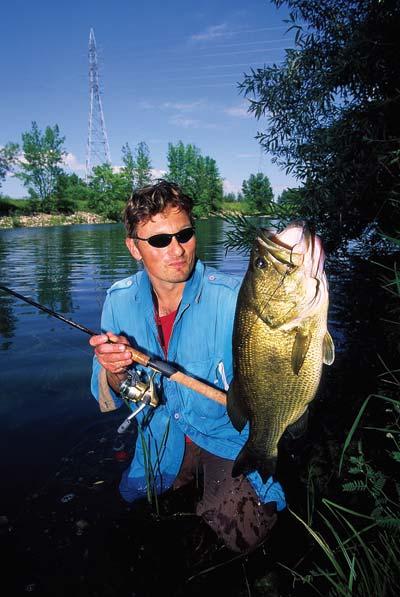 The Ottawa is one big, diverse river, ranging from semi-wilderness to, well, Parliament Hill. Most freshwater species can be found throughout the river, but the upper and middle reaches are better known for smallmouth and walleye. Where the lower river widens into a lake, however, its weedy (and under-fished) bays produce lunker bass, as well as muskies up to 50 pounds. For something different, there are also shad and hawg drum to be had, as well as a hot spring bite for crappies.

In 2010, Muskie; The next world record is likely to come from here

When to fish: The action is hottest in fall.

Where to fish: Focus on typical muskie habitat near Arnprior.

When to fish: All season

Where to fish: Focus on shallow back bays, such as Lochaber and Noire, and main rive weedlines and rock points.

Tip: Throw frogs on heavy tackle in back bays earlier in the season, then flip Strike King Coffee Tubes to weedlines and skirted jigs to rock points in the fall.

When to fish: Ice-out until early May is best.

Where to fish: Focus in and around old cattails and submerged trees on the stretch between Ottawa and Montreal.

When to fish: June is prime.

Where to fish: Key in on the dam at Carillon.

Tip: Use a basic bait rig tipped with frozen shrimp, or try a Hopkins jigging spoon

—Ben Woo, an event producer and the president of the Berkley B1 Canadian Bass Open

When to fish: The end of May through June is prime.

Where to fish: Just below the Pie IX bridge.

When to fish: The action is great all summer long.

Where to fish: Look for bays with thick vegetation.

In 2008, Muskie; One of the top five muskie waters in Canada

When to fish: Summer through fall.

Where to fish: Weed edges and break lines near the town of Plantagenet.

When to fish: Summer.

Where to fish: Lily pad patches along the shoreline.

Tip: Fish topwater Moss Bosses or SaladSpoons, or try a worm along the weedline.