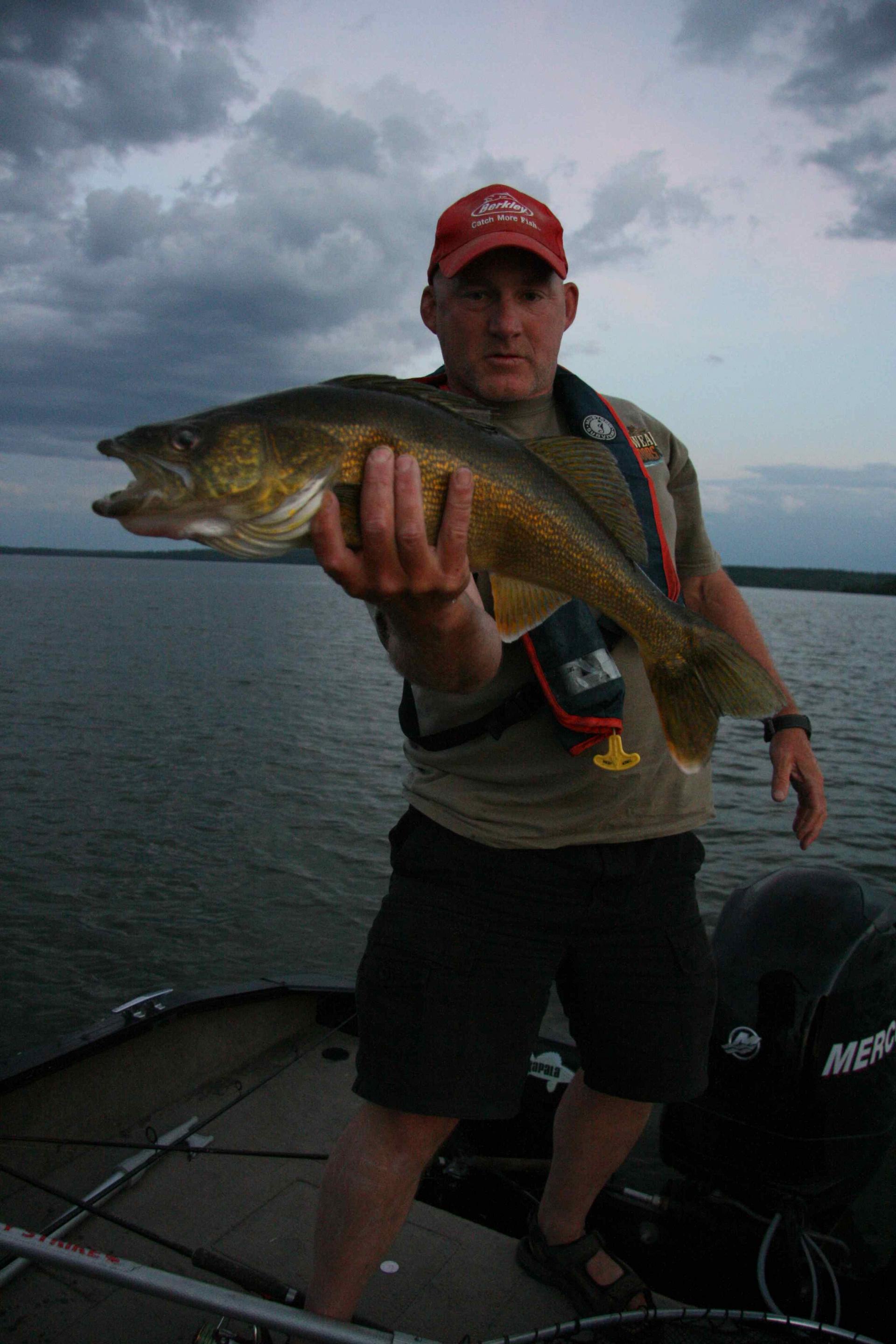 Like Lloyd Lake, Winefred is a great walleye fishery. In fact, it’s a favourite destination for two of Outdoor Canada’s long-time Alberta field editors, T.J. Schwanky and Brad Fenson (coincidentally, Brad and his bride to be arrived the evening before my departure. Congrats again, you two, on your nuptials). And like Lloyd, Winefred is also home to northern pike—and some big hens at that.

In fact, catching giant northerns was the focus of the trip, as I was accompanying fishing TV star Angelo Viola to shoot an episode for his Fish’n Canada Show (lucky me: Ang’s regular co-host, Pete Bowman, was on vacation and therefore unavailable). Angelo and I fished hard for three solid days, despite some dicey weather on our second day, and I have to say, it was an interesting experience fishing with a microphone tucked into your collar and a camera lens trained on your every move (kudos to cameraman Adrian Parks for his patience, and practised eye). Then there’s the direction of the sun to worry about, not to mention the rocking of the boat. My only hope is that I don’t look and sound like a complete dork when the finished product hits the small screen.

In the end, we certainly caught enough walleye and big pike to make a good show, and I’m really looking forward to seeing the episode when it airs sometime during the Fish’n Canada Show‘s September to September season. I’ll be sure to post a notice when I know when it’s about to air. In the meantime, you can listen to Ang and me on the Outdoor Journal Radio Show, briefly chatting about our time together on the water (just click here). I’ve known Mr. Viola for more than a decade now, but we’d never had the chance to fish together until this trip. All I can say is, I can’t wait to hit the water with him again. What a hoot we had.

Of course, there were some important people behind the scenes to help make this particular episode of the Fish’n Canada Show happen. Let’s start with Frank Creasy, CEO of Fort McMurray Tourism, who toured us around Fort Mac and the surrounding oil sands operations, then drove us all the way out to Winefred Lake Lodge, three hours south through the boreal forest (I understand Angelo will recap that leg of our trip on his show, so enough said for now). And if that were not enough, Frank even returned to pick us up for the ride back to Fort McMurray to catch our flight via Calgary back to Toronto. Cheers Frank!

Then there’s Ray Kohlruss, head honcho of Reel Angling Adventures, offering guided fishing tours and hunts in northern Alberta. Now, it takes an angler of particular character to surrender his Princecraft for three days to two other fishermen (that would be Ang and me), so I salute Ray for that, to be sure. But what really impressed me was our last night at Winefred, when Ray, Ang and I hit the water, without Adrian the cameraman in tow, to just, well, fish. Unbelievable. Ray put us on the walleye big time, in two to three feet of water no less, giving us our final big fill of Winefred’s release-only walleye fishery. (Yes, I should note, you can only retain pike (one under 70 cm and one over 100 cm), perch, burbot and whitefish on Winefred, and all baits for any species must be barbless, and unscented. Hey, all the more the challenge.) I’m looking forward to fishing with Ray again, especially after hearing the tales of him and Ang catching epic numbers of ’eyes on Alberta’s Calling Lake.

Finally, a giant shout-out to Carol and Gary Regular, the managers of Winefred Lake Lodge: you and your staff, from the guides down at the docks to the talented head chef (thanks for making me fat, dude) to the support staff (especially Cheryl, for tidying our tackle-strewn rooms), made our stay seamless—and loads of fun. I especially must compliment Carol, though, for her charming Newfoundlander wit and hospitality. What a treat.