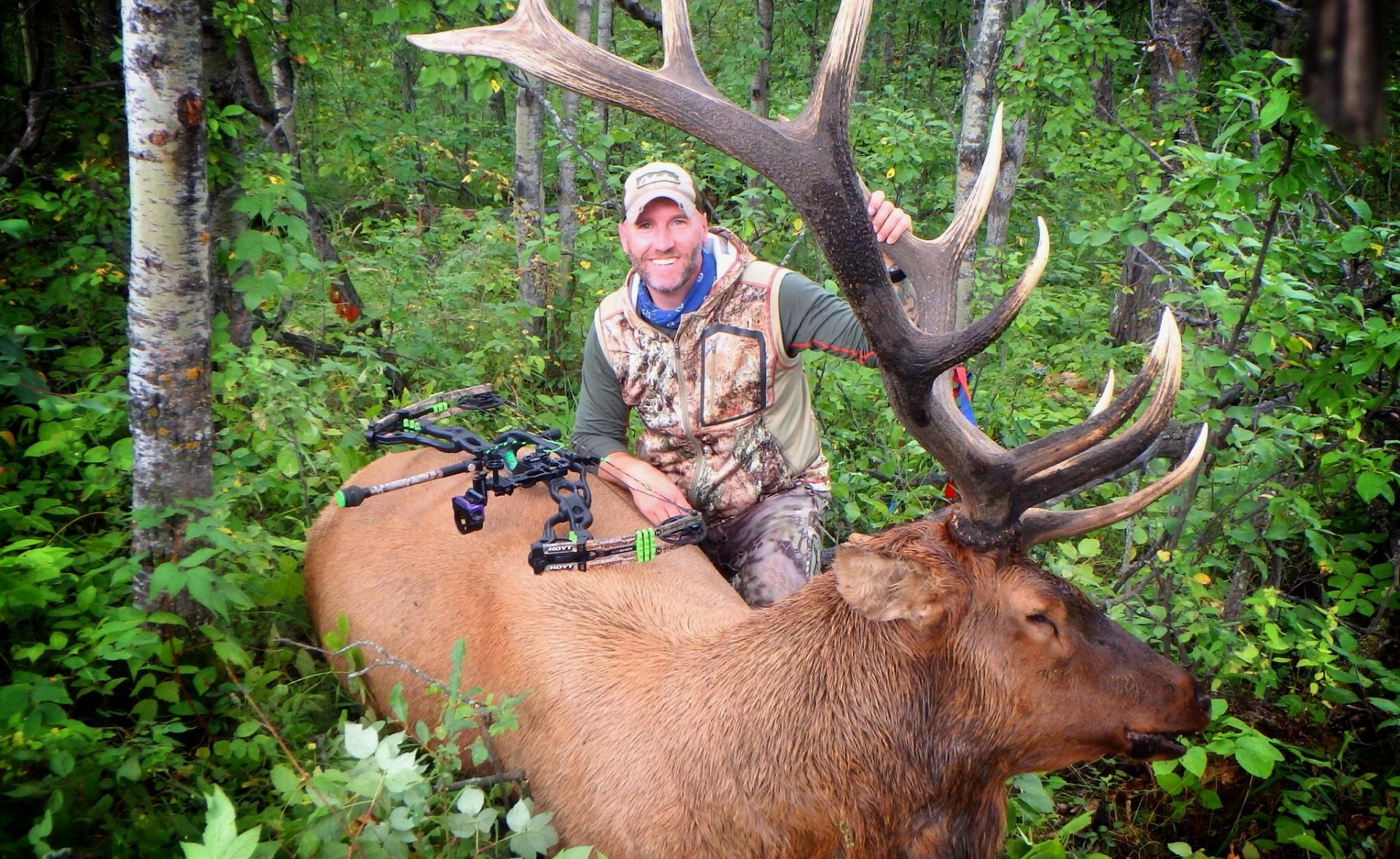 Your complete guide to hunting buglers in the pre-rut, bow-only season

Rocky Mountain elk are a difficult animal to hunt, never mind bowhunt. They’re smart, they have superhero senses and they travel in herds—defences that are hard to beat. But there’s a brief window of opportunity before the fall rut when big bulls can be fooled, making it an excellent time for bowhunters to fill their tags.

Like other members of the deer family, elk breed in the fall, with the rut peaking between September 15 and 25. During the pre-rut in the first half of September, bulls can no longer tolerate their summertime companions, so they roam about looking for nutrition, shelter and, of course, cows to breed once the rut gets underway.

In this state, bulls are often easier to call into range than at any point other than the peak of the rut—when they throw caution to the wind in pursuit of hot cows—making it a prime time for bowhunters. It also presents some unique hunting challenges, requiring patience and altered tactics.

The first step to arrowing a pre-rut bull is finding fresh sign, which lets you know they’re in the vicinity. And once you find the animals, you can seal the deal by setting up an ambush, working a spot-and-stalk or calling—or a combination of all three. Here’s how.

Elk inhabit a variety of terrain throughout Western Canada, from rolling prairie grasslands to the south-facing grassy slopes of the rugged Rocky Mountains, and almost everything in between. They often travel daily to and from prime feeding areas, and they’ll seek out new locations if the forage is sub-par or they feel threatened. That means hunters must be in prime physical condition to follow the herds.

Hunting where the sign isn’t fresh is pointless. And don’t hunt where elk have been or where you think they may return—hunt where they are. I made the mistake of not doing this when I first pursued elk because I thought they behaved like moose. They don’t. 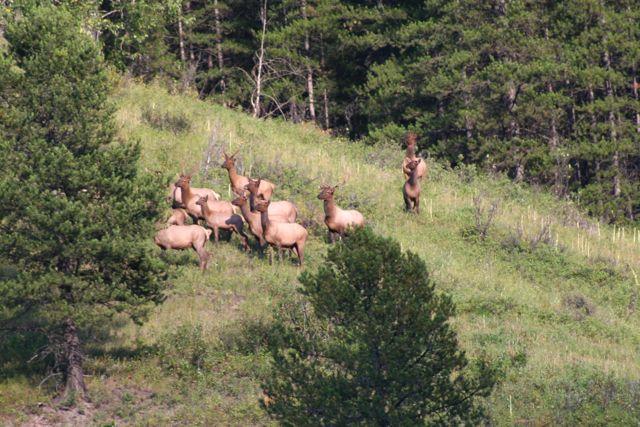 Elk are social and vocal animals that travel in herds and move often (above). If you aren’t hearing them or finding plenty of fresh scat, keep hiking until you do. Like all game animals, elk require food, cover and water, and during the pre-rut this doesn’t change. Look for food sources such as standing crops, grasslands and other green shrubs.

Fresh rubs along saplings and poplar trees (below) are your best evidence that a bull elk is in the area. Bulls also create wallows to decorate themselves with mud and urine to lure in the ladies. Found in wet, flat areas at various elevations, wallows can make for awesome pre-rut hunting locations. 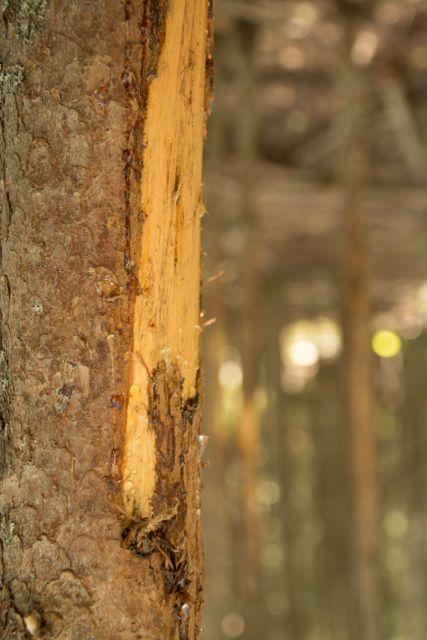 Multiple beds within the same vicinity usually indicated the presence of cows, especially if you find a calf bed. And if cows are in the area, bulls will be, too. Scouting for bedding areas during the summer and early fall can be risky because you could spook your quarry. But elk have so many bedding areas, and move around so much, you likely won’t bump any provided you hunt your way in and go slow. Watering holes and cover in a cool area near a food source are your best bets to find beds. Bedding areas also come with an abundance of trails, which the elk will use year after year.

Once you find fresh sign or actually spot some elk, you know you’re hunting in the right area. Now you just need a plan to get within bow range of a bull. 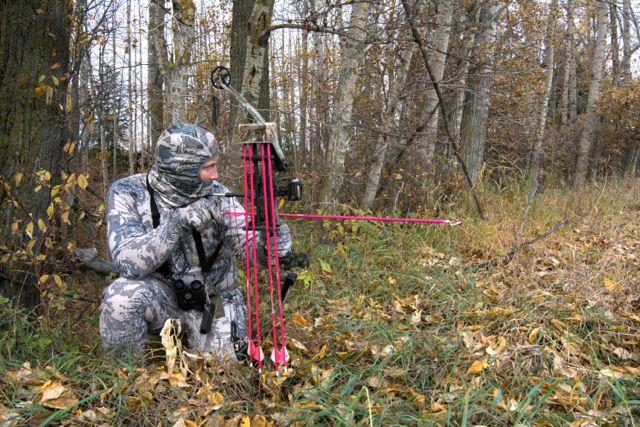 Shooting from a treestand can be very effective, but because elk travel along so many routes, picking the right spot is difficult. One productive location is over watering holes or wallows (above). Move in quietly, remain still once you’re set up, and put in your time at dusk, dawn and midday. Because elk herds travel such vast distances, patience is the key to a successful ambush.

If you prefer a more active strategy, your best bet is to find elk feeding at dusk or dawn, then set up an ambush on a trail leading to their bedding area. This requires intricate knowledge of the terrain the elk are using, but it’s highly effective when they decide to meander your way for a rest. Also seek out trails that funnel into watering holes, or change elevation slightly in either direction.

One time in early September, I was in tight on a young bull, but not quite close enough for a clean shot. Unfortunately, he saw me before I saw him, and I was busted—he wouldn’t come any closer after seeing me move. That happened because I was moving too fast while trying to cut off the herd as it moved up the mountainside.

So remember, when stalking elk, there’s no such thing as going too slow. And under no circumstances should you make any noise that is unnatural, such as the sound of zippers or clanging metal. If you happen to snap a twig or make other natural noises, you should be fine. Just be patient and sit tight for a few minutes to assure any nearby elk you aren’t a threat.

If you plan on stalking elk in their beds, meanwhile, be aware that it’s a one-shot deal. Once spooked from their beds, elk won’t rest in the same spot again for a long time.

The toughest part about stalking elk is that you usually don’t know exactly where they are. You may think you have them all in view as you move cautiously into shooting position, then get busted by previously unseen animals. Many times, I’ve been stalking one or two elk, thinking that was the entire group, only to have another 15 or 20 unexpectedly stand up in the same vicinity.

When bowhunting, nothing gives you a better shooting opportunity than letting the animal come towards you, and calling is an effective tactic to lure them in. Unfortunately, calling also gives away both your position and the element of surprise, so animals tend to enter cautiously. 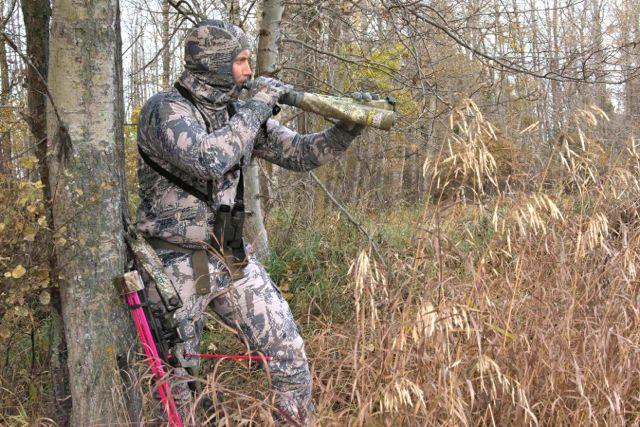 Before beginning a calling sequence, make sure you’re set up and ready to shoot with limited movement (above). Hide in cover, but not so much that it impedes your shooting lanes—you want just enough cover for the elk to expose itself while searching for you. During the pre-rut, elk can come in quickly or slowly, quietly or loudly, and either carefree or cautiously (or, of course, not at all). The point is, you must be prepared for any eventuality.

After calling, be patient and don’t move. If you don’t hear anything, assume the elk are coming in extremely cautiously, expecting to see a fellow elk. If they detect any motion whatsoever, they’ll stop until they’ve positively identified the source of the movement as another animal. Never take your eyes or ears off your downwind side. And if you’re confident elk are nearby, stay put for at least an hour or two.

Pre-rut elk make many different sounds, from social mews, estrus whines and warning barks to intense growls and a variety of bugles. Each sound means something different, so you must respond or initiate the calling accordingly. Also keep in mind that elk talk is similar to human dialect in that it differs from place to place and from elk to elk.

The key to successful elk calling is not making the perfect sound, but rather making the correct sound at the perfect time. For example, herd talk, such as mews and chirps, is used throughout the year, so it’s a safe choice during the pre-rut. At this time, cows and calves stick together while the bulls seek out cows—give a few chirps and mews, and the bulls are likely to come and investigate.

Location bugles are also a fantastic pre-rut call for finding bulls. I love to bugle in the dark to locate elk, either the night before the hunt or an hour or two before sunrise. I’ll bugle and wait five minutes for a response. If there isn’t one, I move on, looking for bulls that are in the mood to talk.

Once I hear a bull respond with a bugle, I move in as close as possible, wait for first light, then set up a cow decoy and make some light cow calls. That’s it. From then on, I let the bull do the moving.

Calling solo makes for a tough bowhunt, so it’s best to partner up, putting the shooter out front between the caller and the elk. It’s the caller’s job to lure the bull past the shooter, and it’s the shooter’s vital responsibility to remain invisible. This set-up is superb, and a favourite among experienced bowhunters.

If you have to hunt alone, however, call first, then quickly and quietly move 20 or 30 metres closer to the downwind side of your bull, and get ready. With patience, skill and a little luck, you can fill your tag days before rifle season even opens.