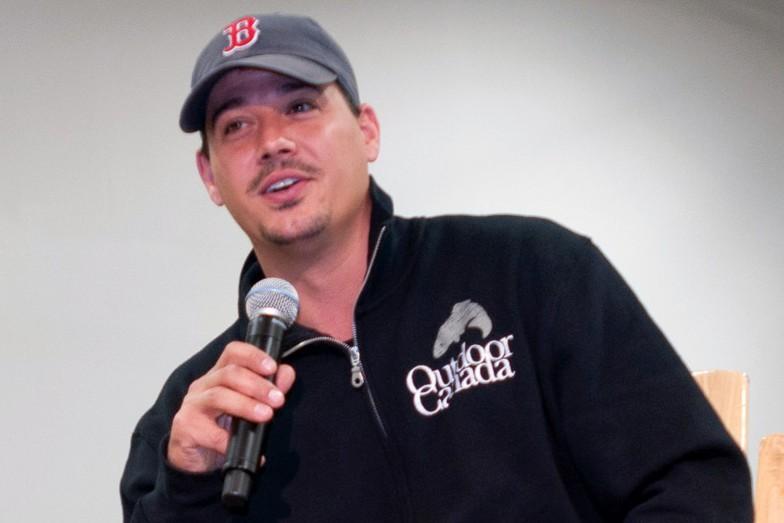 Survivor champion Boston Rob tells us what he loves about fishing

Four-time contestant on reality TV show Survivor, and winner of the million dollar prize in 2011, Boston Rob is also a life-long angler. We caught up with him at the Outdoor Canada Show during the Great Outdoors & DIY Weekend last fall to talk fishing.

On getting his start as an angler

Growing up, my dad was the first one to take me fishing. I was probably six or seven years old the first time. My brother and I, growing up in Boston, we did a lot of fishing in the reservoirs and the ponds, freshwater fishing. We also had a boat and we’d fish right out of Plymouth, Massachusetts and there were a few summers where I felt like I was on that boat every single day. We’d go mostly striper fishing, but also blue fishing. We went for tuna and shark a few times, too.

On what draws him to fishing

It’s extroverted. You can go and have a good time with your friends. It’s a social event. Not to knock hunting, but I never got it, even though my brother’s a big hunter. You’re freezing, you have to be quiet, you can’t talk, you’re sitting there waiting for something to come up to shoot it. With fishing, it’s more of a social experience. You can eat, you can have a conversation, the weather’s usually pretty good and you’re often on a boat. I enjoy it much more.

On his favourite species to catch

I like striper fishing. And more recently, I’ve gotten into big game fishing. I’ve done a few trips with my buddies down to Cabo San Lucas, Mexico, and Costa Rica. We go for sailfish and marlin.

On his secret striper bait

I’m going to get in trouble for saying this but we use sea clams dipped in maple syrup. Everybody has their own weird things. I don’t know, there’s something about it that works.

On the appeal of ocean fishing

On his favourite place to fish

I like Cabo San Lucas, where I’ve caught three sailfish and two striped marlin. My friend has a boat and we go out into the sea of Cortez. I also like the Northeast. I love the striper fishing because that’s where I grew up. Plymouth, Cape Cod Bay, Wellfleet—that whole area.

On his biggest catch

My 140-pound marlin, which is pretty good size for a striped marlin. It wasn’t a blue or black marlin. I’ve also caught some big sharks in Boston some hammerheads and some blue sharks as well.

On his most memorable day on the water

Stripers are known for their run, but one day my friends and I caught, like, 25 keepers. This was back when the limit was 36 inches. The striper had to be 36 inches to keep it and you could only take two per person. There was 10 or 12 of us and everybody had two keepers. It was insane. I have a picture in my house of all my friends and I with our fish. That was a pretty great day. On Survivor, I did a lot of spear fishing, which is rewarding in its own right. It’s rewarding because I was actually taking it right from the ocean and eating it. We caught a bunch of triggerfish and all kinds of fish in the South Pacific, in Panama and in South America.

I have a home in Florida where I spend a lot of time now and sometimes we go over to Louisiana to New Orleans and I’ve seen guys catch catfish where they stick their hands into the water and let the fish grab on to their arm. It’s pretty wild. I’d do that. I’d give it a shot.

I’ve gone in Boston a few times, but not where they have the house and the fire, like the Walter Matthau movie (Ed note: Grumpy Old Men). I want to do that. I know that’s big up here in Canada. I’ll go ice fishing as long as we’re in the house and it’s warm and we’ve got some food going and we can still be social. The five guys standing around with their hands in their pits, drinking a beer, that’s not for me.

On keeping a positive attitude while fishing

Go with the intent to have a good time. Don’t worry if every little thing doesn’t go right. Look around at where you are and appreciate the situation for what it is. If you go fishing, you can’t control if the fish are biting or not. You can control your attitude and how good of a time you have. A bad day on the water is better than any good day at work.