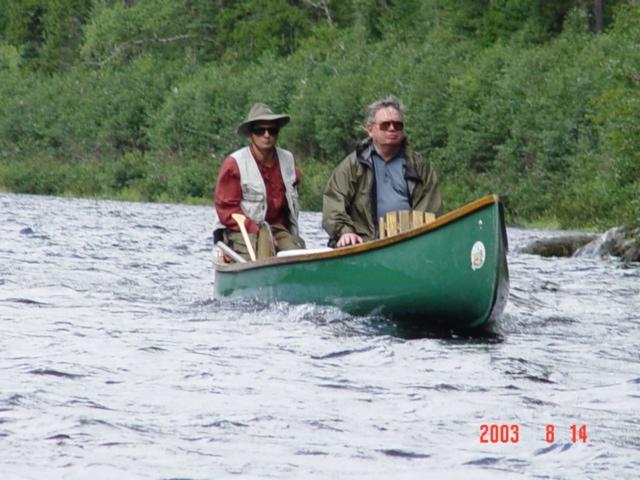 Breckenridge doing what he loved most--fishing for Atlantic salmon
News

David Breckenridge, president of Brecks International, manufacturer of Williams and Mooselook lures, has died. He was 74 years old. Breckenridge passed away on Thursday, October 4 at the University Hospital Centre in Sherbrooke, Quebec, after a brief and sudden illness.

“He wasn’t a boss. He was my friend and mentor,” says Brecks vice president Mark Stiffel, who worked with Breckenridge for 25 years. “People don’t leave when they start working here,” he adds, attributing the staff’s loyalty to Breckenridge’s leadership. “He was very generous and supportive and if thought something needed to be done, he just did it,” Stiffel says.

Breckenridge took over the management of Brecks from his father George in the early 1960s, importing flies and distributing the then relatively new Mepps spinners from France for the Canadian market. Over the years he built Brecks into the mutli-faceted company it is today, Stiffel wrote in an announcement to the press.

Brecks is the exclusive Canadian national distributor of Mepps lures, Mister Twister soft plastics from Louisiana and Maxima lines from Germany. Parts are imported and assembled, packaged and marketed in Canada. David Breckenridge acquired outright the Williams fishing tackle division in 1989 and moved the operation to the Brecks facility in Sherbrooke. The acquisition of Mooselook followed in 2002.

His commitment to the sportfishing industry was strong, if understated. “He firmly believed in giving back and supported numerous associations within the sportfishing industry over the years such as the Canadian Sportfishing Industry Association, Sport Fishing Institute and Outdoor Writers of Canada,” Siffel says. He strongly believed in supporting outdoor writers as he saw them as the frontline advocates of the outdoors. He was also actively involved in the community, serving on numerous boards, supporting hospital foundations, charitable organizations and educational institutions, many of which were quietly and unassumingly supported, which was his way, Stiffel says. “He didn’t want to have his name in lights. It was just the right thing to do.”

An avid and accomplished salmon angler, Breckenridge fly-fished all over the Atlantic provinces and Quebec. “His favourite place to be was in a canoe on Atlantic salmon rivers with a fly rod in hand,” Stiffel says.

Breckenridge’s family and friends are gathering at the Plymouth Trinity United Church in Sherbrooke on Thursday, October 11 from 1:00 to 2:30. The funeral service will be held at the same church at 2:30. Interment of the ashes will be held at the Elmwood Cemetary, Sherbrooke. As a memorial tribute, donations to the CHUS Foundation are encouraged.