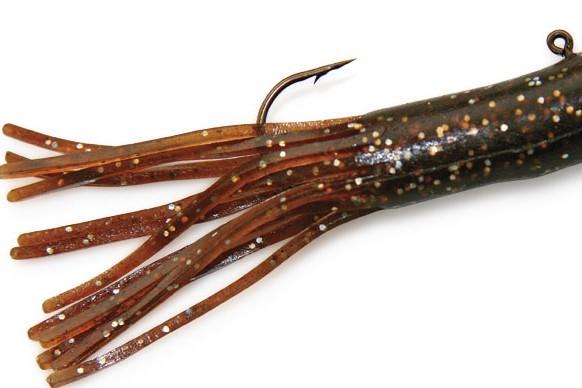 Tube jigs, soft-plastic gobies and swim baits for walleye? That's what they're asking for floats and weights can help you catch more trout

There are many ways to learn about angling, but listening carefully to what the fish have to say is unquestionably the best. The walleye in the giant aquarium at Winnipeg’s Mid-Canada Boat Show, for example, have been giving me an earful-and a few surprises.

It all started two years ago when I was presenting a seminar about what factors to consider when selecting a bait: depth, speed, size, profile and colour, in that order. To make my point, I tied on a soft-plastic tube jig and pitched it into the glass-walled, three-metre-deep aquarium-the so-called Hawg Trough-where several dozen walleye swam about contentedly, albeit with their bellies close to the bottom.

Now, a tube jig is probably the last lure most anglers would select to catch walleye. But I had a point to prove: if you put your lure where the walleye are concentrated and move it enticingly, you’ll trigger them to bite. That said, I was still surprised when one walleye after another devoured the bait, while turning up their noses at almost every other presentation. I caught so many fish over four days, in fact, that during my last seminar I promised to catch four walleye on four casts or I’d jump in the trough. Suffice it to say, I stayed dry.

Sure, I figured I could catch a few walleye, but I was amazed that I could literally call my shot on every cast. The fish were clearly telling me something, so I listened-for the past two years, I’ve thrown tube jigs to walleye every time I’ve encountered a school. And it’s one heck of an effective technique, as good as, or better than, almost every other standard walleye presentation, including live bait. If you haven’t tried it, you must.

I’ve found the best producer is a 1/8- to 3/8-ounce (depending on the depth), three- or four-inch, soft-plastic tube jig. The top colour is smoke, although brown and green also shine. When the walleye are aggressive, I let the tube settle to the bottom, pop it off, then let it spiral back down. When the fish are fussier, I position my rod parallel to the water and slowly drag the jig along the bottom. When I feel the tube nudge up against a rock or log, I shake it gently using my rod tip and slack line. Walleye can’t resist this presentation.

They also can’t pass up a drop-shot rig tipped with a goby-style bait-at least that’s what they’ve been telling me. I’ve been preaching about the effectiveness of goby-style, soft-plastic offerings in lakes and rivers where gobies don’t exist for some time now. Most anglers think they only work in the Great Lakes, but gobies are identical in size, shape, appearance and behaviour to our native sculpins-and all fish will greedily eat those.

That’s why I was confident the walleye in the Hawg Trough at this past February’s Mid-Canada Boat Show would devour the presentation. I wasn’t disappointed-a fish ate the bait on the very first cast. And fish continued eating the bulbous goby imitation every time I flipped it into the tank. By the end of the four-day show, more walleye had smacked a Slammer, Gulp! or Bass Magnet goby than any of a dozen or so other presentations. I wasn’t surprised.

So, who knows what the walleye might tell me this season? Whatever it is, you can be sure of one thing: I’ll be listening closely.

At this past February’s Mid-Canada Boat Show in Winnipeg, I was shocked by the number of walleye that went berserk when I flung out a giant Spro BBZ-1 swim bait during the muskie portion of my seminars. After all, this hard-plastic, eight-inch, 4.9-ounce swim bait is a trophy muskie, pike and lake trout lure for crying out loud. But when the walleye in the tank, particularly the bigger ‘eyes, spotted it, they scooted after it like lawyers chasing an ambulance. You can bet I was listening to what the fish were saying-and I’ll be trying the lure out for real this season.