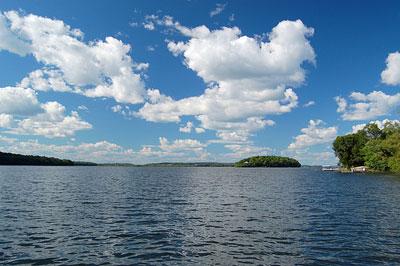 In the heart of Ontario’s popular Kawartha Lakes, Rice is shallow, fertile, weedy and a three-season, multi-species hot spot. In the spring, the north shore gives up good numbers of slab crappies, while summer means largemouth; although the wild rice beds have mostly disappeared, there’s still a lot of cover, including plenty of cottage docks. In the fall, meanwhile, football-sized smallies come out to play. And here’s a little-known tip: Fall is also a red-hot time for walleye.

When to fish: Early in the season.

Where to fish: Work shallow, protected bays along the lake’s north shore, where the water warms quickly.

In 2008, Largemouth bass; Great numbers of fish weighing up to five pounds

When to fish: From opening day until August.

Where to fish: Green weedbeds in three to six feet of water.

Tip: Use white spinnerbaits with gold blades for numbers of fish. For big ones, cast Texas-rigged worms or black and blue weedless flipping jigs.