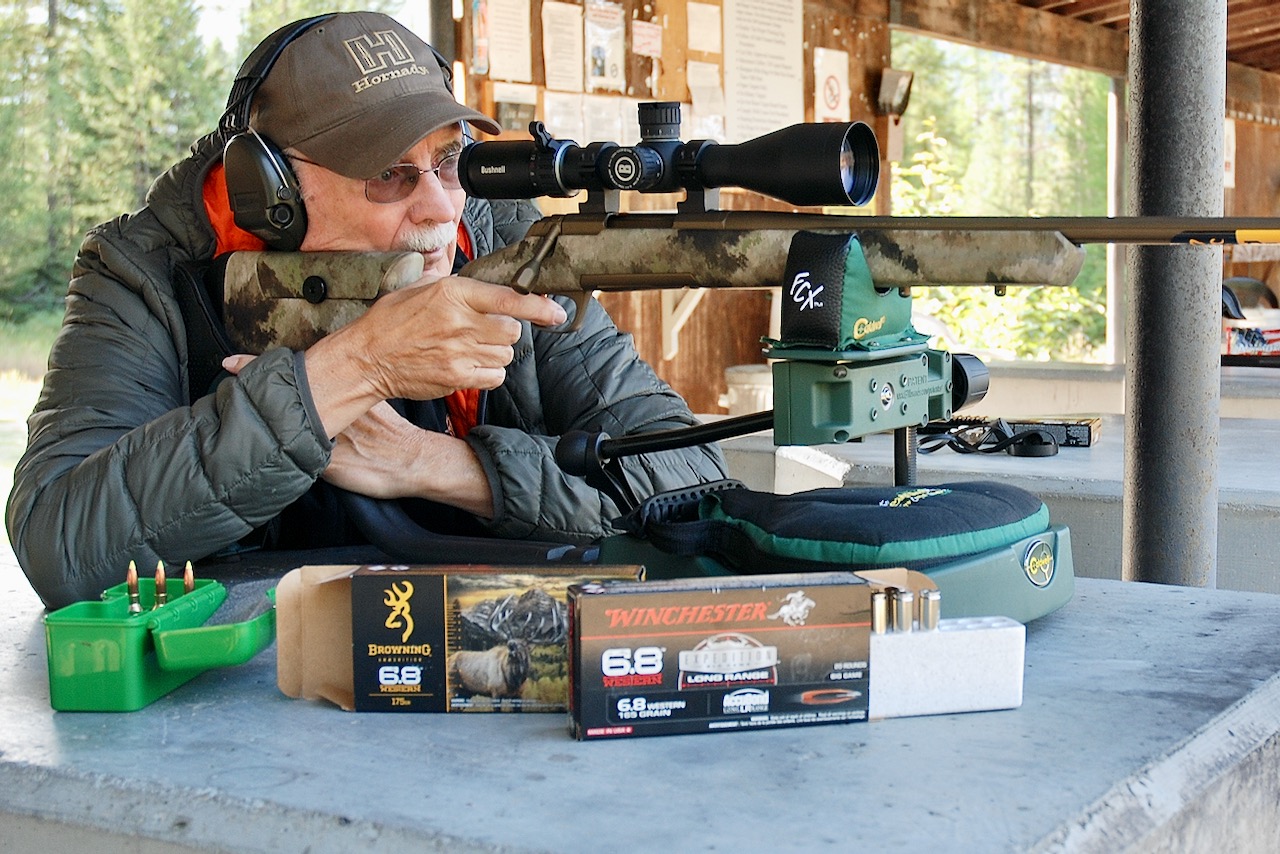 Winchester’s latest cartridge offering, the 6.8 Western, may lead one to ask, do we really need another .277 cartridge when we already have four? That’s especially so when you note the similarity between the 6.8 Western cartridge case and the .270 Winchester Short Magnum case. Indeed, the .270 WSM case is actually the parent of the new 6.8 case. So, why the new .277 chambering? It all relates to the faster twist rate in 6.8 rifles that will shoot long, sleek, heavy-for-the-calibre bullets with a high ballistic coefficient.

The idea here is to overshadow the long-range performance of the popular 6.5s, which are marginal on long-range game such as elk. In short, 6.8 rifles with a 1:8-inch twist rate or faster will handle factory loadings of 165-, 170- and 175-grain bullets. These are heavyweights when compared to the standard big-game loadings of the .270s or 6.5s. While the 6.8 Western will not compete with the .27 Nosler, it does fill the gap between it and the .270 Winchester. And it does so in a short action with an additional 400 foot-pounds of energy at 500 yards.

The first requisite for any long-range hunting rifle is dependable accuracy with ammunition capable of ethical kills at extended distances. Browning’s X-Bolt Hell’s Canyon Max Long Range in 6.8 Western is designed to do just that. It includes a heavy sporter contour fluted barrel with a 1:7.5-inch twist that is free-floated by bedding the front and rear of the action. It also includes the new Hawg removable muzzle brake, which is designed to reduce recoil by up to 73 per cent. Next in the pursuit of long-range performance is the three-lever Feather Trigger that offers a clean, crisp pull, with no creep and only minimal overtravel.

Meanwhile, the short 60-degree bolt lift affords faster cycling without any interference from the scope, while the extended bolt handle allows for an easier and faster grip. Made of lightweight polymer, the detachable rotary magazine feeds cartridges directly in-line with the bolt, and as a decided extra safety feature, the bolt unlock button lets you unload a live round from the chamber with the top tang safety still engaged.

Finally, the composite stock includes a vertical pistol grip and an adjustable comb for the perfect dial-in, eye-to-scope alignment, as well as quarter- and half-inch spacers for length-of-pull adjustment. The stock is finished in A-TACS AU Camo, while both the receiver and barrel are finished in a burnt-bronze Cerakote.

Right out of the box, my test model was impressive—it just looked like a purpose-built rifle. It came with Browning’s integral X-Lock 34mm scope mounts, which utilize four screws per base, a real plus when mounting the heavy, 37-ounce Bushnell Forge 3-24x56mm scope. Once the scope was in place, the combo weighed in at 10 pounds nine ounces.

I then checked the trigger, which initially surprised me with a factory pull weight of well over four pounds. That’s heavy for a potential long-range rifle, so I set about reducing it. With no creep, pull weights then varied only marginally between two pounds 13 ounces and two pounds 15 ounces.

My only cautionary comment is about the muzzle blast associated with the Hawg muzzle brake—it was loud, so adequate hearing protection is a must on the shooting bench. On the upside, it sure took the sting of the recoil.

At 100 yards, eight of my handloads averaged 0.782 inches with two touching the half-inch mark at 0.558 and 0.595 inches, respectively. The three factory loads faired a bit better with a 0.709-inch average, of which the Winchester Expedition Big Game Long Range 165-grain ammo bettered a half-inch at 0.490 inches.

The true guts of this test came at 300 yards, however, when three of the four test loads averaged 1.513 inches. Browning’s Long-Range Pro 175-grain ammo bested the lot at 1.408 inches—simply outstanding long-range performance.