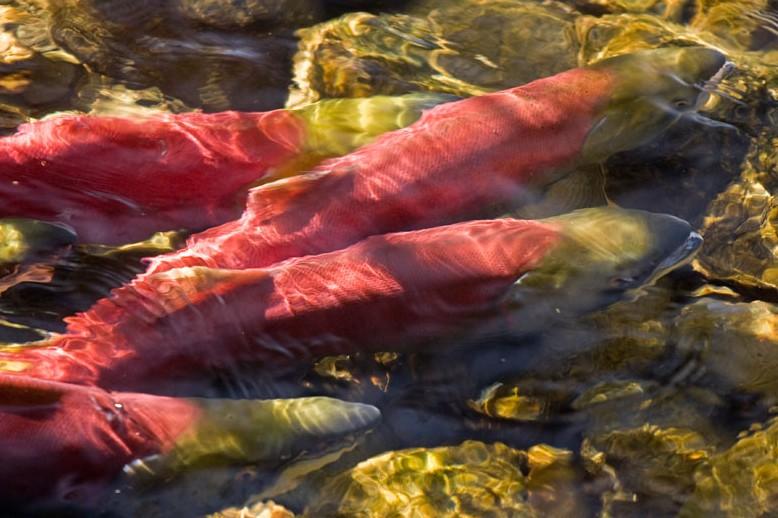 Even though Pacific salmon stop feeding in fall rivers, they'll still strike your fly or lure

Big-water trollers often shrug at the notion of leaving their boats behind and following Pacific salmon into rivers in the fall—even though thousands of fish are almost at your feet rather than spread out over vast stretches of open water. The reason, they say, is because salmon don’t feed when they return home to their natal rivers. And if they’re not eating, they’re not biting, so there’s no point going after them.

Too bad for the angler who thinks this, because salmon certainly do bite in rivers, so much so you can have exceptional days that far exceed anything you can experience zooming here and there in a boat. Sure, they may not be feeding, but there are other reasons these predators will still whack a fly or lure. Understand why and you’ll have a much better idea of how to catch them—and enjoy the most exciting time on the salmon-fishing calendar.

The scent is just too irresistible

Without doubt, bait is far and away the best thing to use to catch salmon in rivers (where legal, of course). A fish will lock onto the smell of roe, for example, and zoom right in from out of sight and smack it without so much as stopping to be introduced. That’s because scent is a powerful stimulant for salmon, even if they’re not hungry. Roe, in particular, seems to evoke the salmon’s hardwired cannibalistic tendencies.

Bait such as sand shrimp, herring, roe and decaying salmon flesh—along with artificially scented baits—also make for fewer lost fish. A salmon is more inclined to hold a smelly bait in its mouth longer than it will a lure that tastes like metal, allowing for easier hooksets.

Bite getters: Salmon roe, particularly from chum salmon; scented baits, such as Powerbait that can be balled around a hook or put in a roe bag.

Their hormones have taken over

During the last few months of their lives, salmon are transformed by genetic code. Their colouring changes, their bodies assume new shapes and-in ocean-going fish-they adapt once again to freshwater. Above all, they mature sexually, with sex hormones sluicing through their bodies. Think of teenagers hitting puberty: just as adolescents may do things that seem inexplicable, so do salmon under the powerful influence of their own hormones.

Some days, for example, salmon in rivers spend a great deal of energy flitting here and there, performing cartwheels in the air or racing from one end of a pool to another. This is when they’re apt to bite at the likes of a streamer or spinner if for no other reason than they don’t know what they’re doing.

All salmon species are higher, bony fish that, as predators, chase down prey and consume it (this is even the case with sockeye, which are largely plankton feeders). By nature, then, they are aggressive fish that are focused all their lives on seeking out food from meat sources-namely, smaller animals that, unlike plants, have a means to zip away, school or leap from the water to avoid getting eaten. This requires the salmon to be aggressive to survive. That’s why most plant-eating or algae-straining fish are not by nature aggressive-they don’t need to be.

This aggression is not lost when the salmon cease feeding. They continue forcing themselves to make small things get out of their way and, not having arms and legs, they use the next best thing-their mouths-to express their dominance over other creatures.

Bite getters: Egg Flies and Glo Bugs made from Glo-Brite chenille in orange or pink; minnow patterns, such as Muddlers, for pink salmon; spoons dropped to the bottom for chinook.

Like most animals, salmon maintain a radius of personal space within which they will not tolerate the presence of another creature. So, if another salmon or other fish species gets too close, they’ll move it out of the way. The same goes for a fly or lure that gets too close. And again, they’ll use their mouths to get the job done, giving you the opportunity for a hookset.

Also, in preparation for spawning, male salmon will try to take the best spawning gravel and female, then defend them. The territorial animal will try to keep invaders such as egg-rustling trout and other male salmon-and even your lure-out of the habitat he’s selected for breeding. This is why you catch a greater percentage of male salmon while fishing in rivers.

Bite getters: Epoxy Minnows in blue or green, with eyes; Woolly Buggers in chartreuse, or white with pink thread; a spinner, spoon or Spin-N-Glo in pink or orange, bumped along bottom.

The curiosity bite is the one most commonly associated with coho salmon, which have more in common with steelhead behaviourally than other salmon species. Coho tend to move to visual cues much more than other salmon, sometimes taking off after a spinner as much as 25 feet away, for example. When the lure’s flash attracts their attention, their curiosity takes over and they lock in.

Later in the season, when coho are usually the last salmon in the water, this phenomenon is impressive to watch. Toss a spinner above and across a fish holding its station in relatively shallow water, and try to draw the lure to within 18 inches of the fish’s nose. If the coho turns to follow, you’ll soon notice a most interesting behaviour: it will point its nose first in one direction to give one eye a good view of the lure, then point its nose to the other side to give the second eye a look. Once a coho begins moving its nose from side to side like this, you’re almost guaranteed it will move in and whack the lure. It’s amazing.

When salmon first move into freshwater early in the season, meanwhile, most Pacific salmon species-except for sockeye-will move in and bite a lure out of curiosity.

They just can’t help themselves

For anglers, this is the most important bite of all, particularly in streams where bait is banned. It’s called the passive bite, and it happens when salmon hold station in the river, their bellies on the bottom, neither rising nor moving ahead, back or to the side. From this stationary position, a salmon will briefly mouth and then let go of almost any little thing that passes by its face, whether it’s a piece of flesh, a bit of waterlogged wood or even a tumbling stone. The salmon isn’t intending to bite the object, but only stop it for a moment or two, then release it to be carried downstream by the current.

The good news for the angler is the fish will do this all day long, giving you the opportunity to try drifting such simple things as wool or yarn flies, in various shades, past its snout. The salmon won’t move to meet the fly, nor will it move while touching or releasing your offering. You’ll only know if this subtle bite has taken place by watching your float for the slightest of movement, or if your fly line slows down a bit. Your strike must be made on this smallest of evidence-there will be no smash and grab as with other types of bites. Learn when to strike with this passive take, however, and you’ll increase your river-fishing success by hundreds of salmon in the years to come.