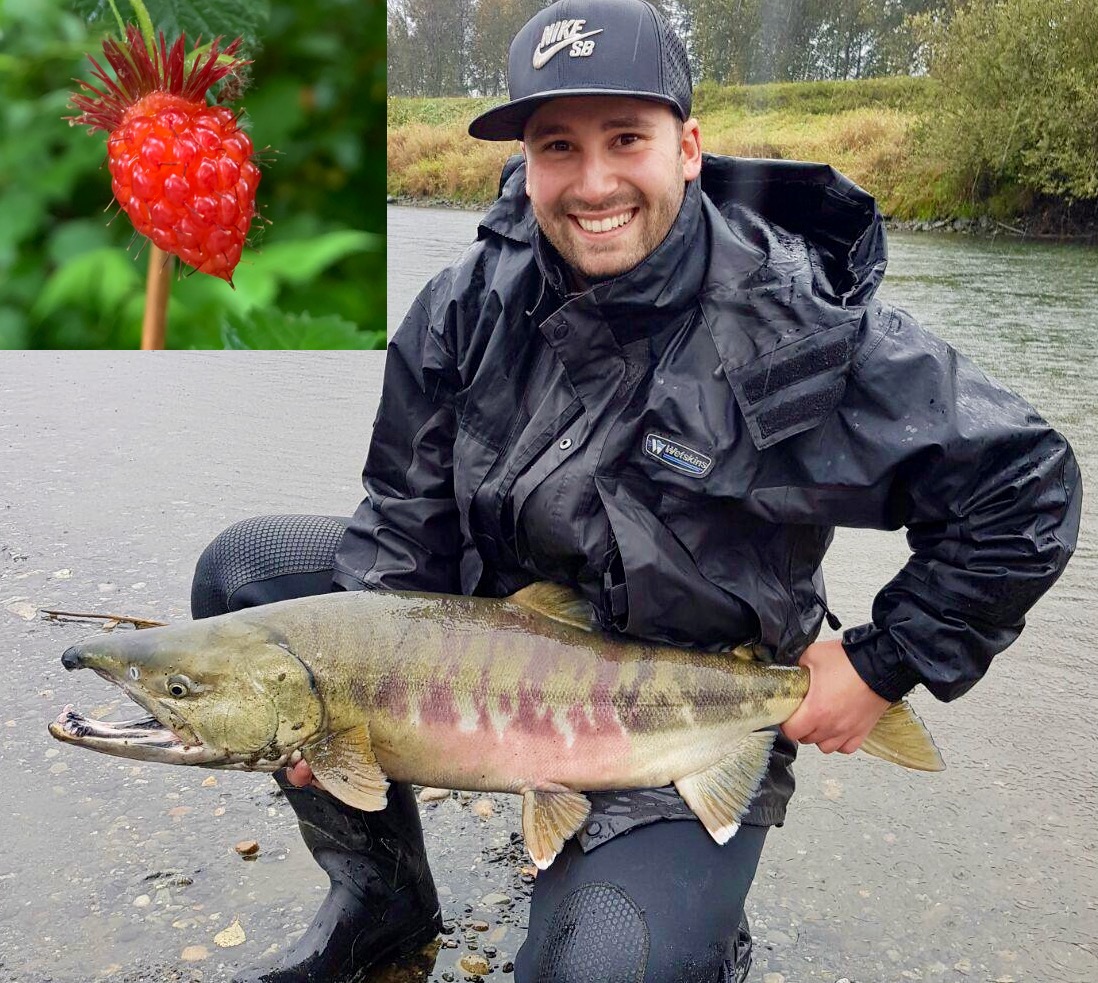 If you’ve fished along the B.C. coast, you may have been tempted by delicious streamside salmonberries. Their orangey-pink colour resembles the flesh of the fish they are named after. But did you know that salmonberries also eat fish? So reveals new scientific research.

In 2019 near Bella Bella, B.C., researcher Lisa Siemens of Simon Fraser University and her team gathered packs, poles, bear spray and measuring tape to launch a fishing expedition—for salmonberries. Navigating prickles, slippery rocks, currents and curious bears, the team studied berries along 14 streams to see how big, sweet and seedy they were, probing whether there was a correlation with salmon returns.

After their outdoor workdays, the team studied the berries, wrapping them in tulle fabric and squeezing them in a garlic press. Using forceps, they then counted each berry’s tiny seeds. They also weighed the berries and measured their sugar content. “We had a beautifully well-oiled machine,” says team member Allison Dennert. “It was kind of hilarious to do that every night.”

So, what did the researchers find? Streams with higher densities of returning chum salmon did not make the berries sweeter, bigger or seedier. Higher returns did, however, result in more salmonberries per shrub. How so? The team concluded that salmon carcasses transferred to streamsides by water flow, predators and scavengers were providing nutrients to the shrubs, boosting their production. In effect, the salmon were feeding the berries. Says Siemens: “The interconnectedness of the ecosystem is incredible.”

Those findings mirror research along one Alaska creek, where scientists counting sockeye over two decades would toss carcasses to one side only, creating an opportunity to see how much salmon nutrients mattered. They mattered a lot—trees on the salmon-enriched side grew faster.

Siemens’ research also confirmed what Coastal First Nations already know. For millennia, they have prized salmonberries and recognized salmon nourishment of ecosystems. “We read salmonberry harvests as an early indicator of salmon population health,” says Heiltsuk community member Jess Housty. So, the next time you reach for a handful of ripe, juicy salmonberries, thank the fish.