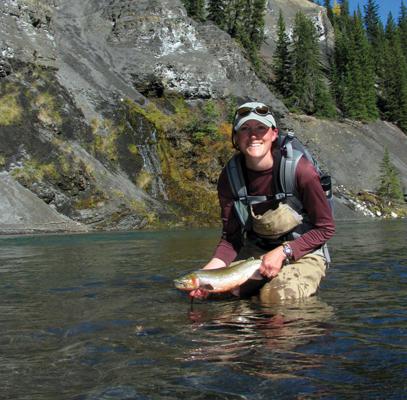 I knew I wanted to move to Alberta the first time I saw the South Ram River. As a kid from Winnipeg spending the summer of 1968 visiting relatives in Calgary, I was simply blown away by the sheer power and beauty of the Ram Falls in west-central Alberta’s rugged foothills. I was also impressed by the number of westslope cutthroat trout swimming around in the blue-green pool at the base of the 20-metre falls. I vowed to one day return, and when I finally did many years later, I was soon in cutthroat nirvana. Not yet a fly-fisher, I used a tiny brass spinner to catch fish after fish, most in the 10- to 14-inch range. Since then, the Ram’s fishery has got even better thanks to better management and catch-and-release regulations. How much better? Anglers can expect cutties up to 22 inches, and 100-plus-fish days are not uncommon. A word of caution, though: This is not easy fishing, with steep canyons and rocky shorelines demanding a fair level of fitness. “This makes for a wilderness experience,” says local guide Dave Jensen, “but it also limits who can actually get in there.” For those who do, however, the reward is incredible scenery and fishing that will truly get your heart beating.