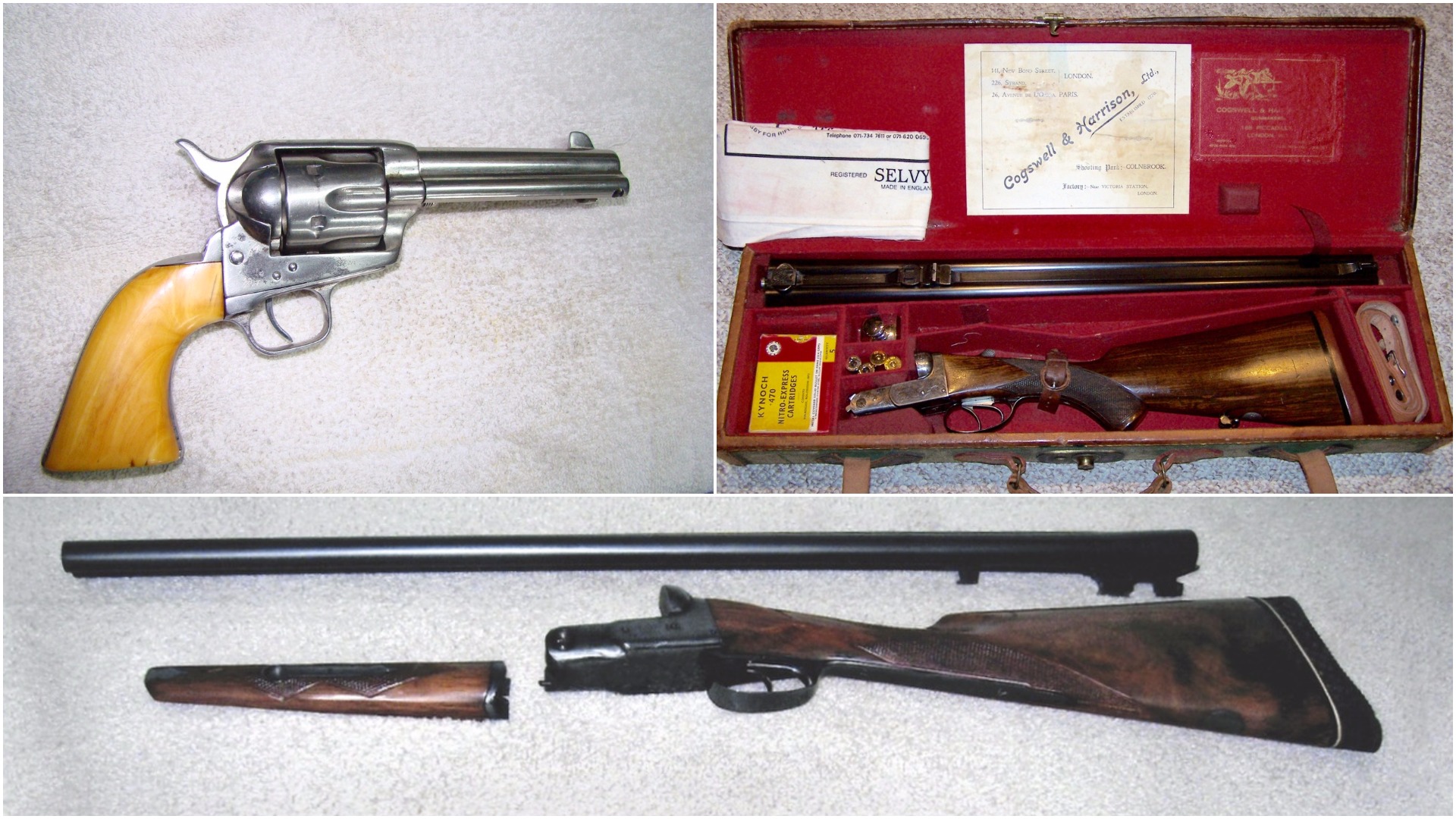 Learn why one reader’s Cogswell & Harrison double rifle is worth over $25,000, plus more cool discoveries 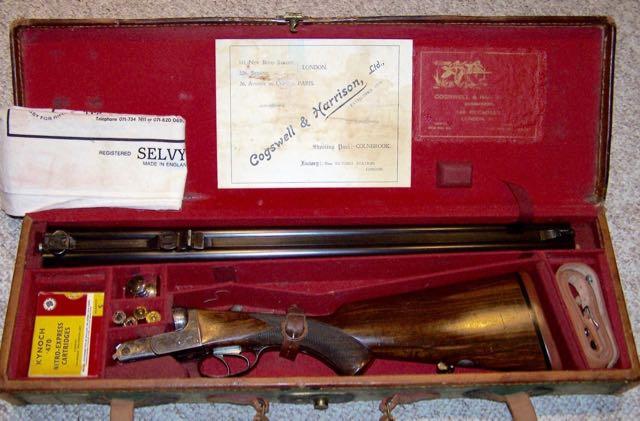 I have an antique cased Cogswell & Harrison double rifle in .470 Nitro Express with a boxlock action (above). The case-hardened Arcus steel is finely engraved. The barrel length is 26 inches, and it’s had a scope fitted on it. The rifle was made in England for a decorated British field marshal, John Vereker, 6th Viscount Gort. If you help me get it appraised, I would like to sell this rifle.

Your Cogswell & Harrison .470 is a very fine rifle, in demand with both collectors of top-quality British sporting arms and hunters expecting to hunt big and dangerous game. Although the rifle is in demand, its market value is hard to assess—the number of people willing to pay five figures for firearms is very small. In the U.S., where there are more collectors (and more multi-millionaires), a double rifle in excellent condition such as this could bring US$35,000 or more. It’s rather like a valuable painting: one can make a rough estimate of its value, but until it actually sells, no one can say for sure. On the Firearms Canada website, there’s a Cogswell & Harrison rifle with identical features selling for $25,000. If the owner gets that amount, or accepts a lower offer, we’ll know the value. 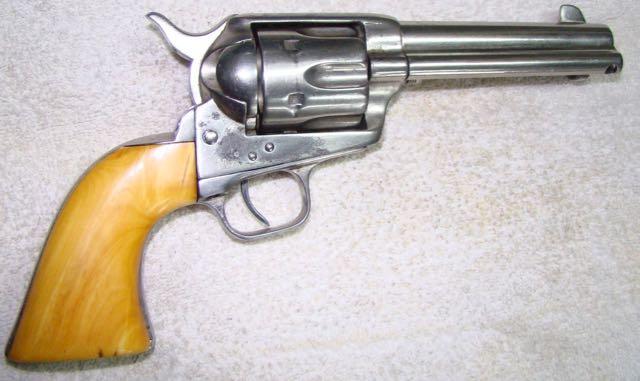 I’m interested in learning what my Colt .45 (above) might be worth. I obtained it shortly after it arrived in Canada from the U.S., about 30 to 40 years ago. Made in 1884, it has two serial numbers: the main one is 107154, while that of the trigger guard is 36754. This suggests the original trigger guard may have been damaged from using the gun as a hammer. Featuring one-piece ivory stocks, the gun functions well. It’s a blackpowder cartridge pistol, however, so I don’t fire it.

Guns don’t get much more collectible than Colt single-actions, especially first-generation examples such as yours. The gun’s condition and the appearance of original features make a tremendous difference in value. Replacement parts with different serial numbers are very common, but they do reduce the value. From the photos, I don’t see any rust or broken parts, but there’s no original finish remaining. It may have been amateurishly buffed at some point to remove rust, which also removed the original markings.

The nicks on the bottom of the barrel are intriguing. According to one article I read, marks such as these were fairly common on revolvers carried by cowboys. If they needed to cross a barbed wire fence and there was no gate, they would apparently use the revolver barrel to hit the wire and knock out a staple or two. They’d hold down the wire while the horse stepped over it, then use the butt of the gun to drive the staples back in.

The barrel nicks, buffed out markings and lack of finish all reduce the value of your gun. Given the demand for Colt single-actions, however, I expect it would still bring $1,500 or so at a firearms auction. There are gun enthusiasts who look for old beaten-up revolvers to send to restorers. The results can look like new, but it’s not a cheap process.

The ivory stocks are collectible as well, but I can’t hazard a guess as to the value. And there are certainly issues regarding the import and export of ivory products. I’ve heard of things such as old pianos and bagpipes being seized by U.S. Customs for having ivory keys or components, even though the ivory might be 100 years old or more.

I have a mint-condition Parker side-by-side 12-gauge (above), choked full and modified, with a recoil pad. It’s marked “Vulcan,” and the serial number is 189401. Based on information from Peter Johnson’s book, Parker: America’s Finest Shotgun, I estimate the gun was made around 1927. Can you tell me what interest there is in this type of shotgun?

The records I have indicate your Parker shotgun was made in 1920. The Vulcan marking indicates it’s a VH model, which was one step up from the basic Trojan model. The VH was the most popular model Parker made, with a total production of about 79,000 guns. Many shotgun enthusiasts consider Parkers to be the best shotguns ever made in the U.S., making them highly collectible.

As always, the gun’s condition is critical to its value. Normally, the frames of Parker shotguns were colour-case hardened, and typically the colours fade with age. So, the first thing a collector looks for is strong original case colour. There are many other factors that also boost the value: smaller gauges are worth more, auto-ejectors can add 25 to 50 per cent to value, and straight stocks such as the one on your shotgun can add 20 per cent. Likewise, a single selective trigger and a beavertail forearm can each add 20 per cent.

As for what can reduce the value, rebluing of metal or refinishing of wood can sometimes drop the selling price by 60 per cent. Collectors also inspect features such as the screw slots, making sure they’re undamaged and aligned with the axis of the bore. An aftermarket recoil pad will also considerably reduce the value.

Your VH in 12-gauge is the most commonly found Parker, and even with only 10 per cent its original finish, it would likely be worth $2,000 or more. With 90 per cent original finish, it would likely be in the $3,500 to $4,000 range, with bonuses for the features mentioned earlier. These are figures serious collectors might pay, though I’m sure they wouldn’t make a bid without first giving the gun a careful hands-on examination.

R.H. “Rudy” Ruana began making knives at his home in Bonner, Montana, in 1938. At first, he used the steel from Studebaker leaf springs for his blades. When finding old Studebakers became too difficult, he started using 1095 high-carbon steel. For the handle, he used cast aluminum with elk antler inserts riveted into place.

During the Second World War, Ruana made fighting knives for U.S. soldiers, then hunting and skinning knives after the war. His knives weren’t fancy and glittery showpieces—they hard-working knives for hard use by guides, smokejumpers, trappers and hunters.

To get his knives into the hands of people who really needed a quality knife, Ruana kept his prices ridiculously low. The 13B (bottom) and 14B models pictured here cost $19.95 in the late 1960s, a bargain for a handmade knife even back then. Thousands of Ruana’s knives are still in use; they simply don’t wear out or break.

Discerning knife collectors consider Ruana a master in every aspect of knifemaking. You’d do well to find one of his originals for $500; I’ve seen many priced from $1,000 to $2,000. A Second World War-era Bowie can even bring five figures. Ruana’s son-in-law and two grandsons worked with him for several years, and they continue to make knives to this day, using much of Ruana’s original tooling—and maintaining his high standards.