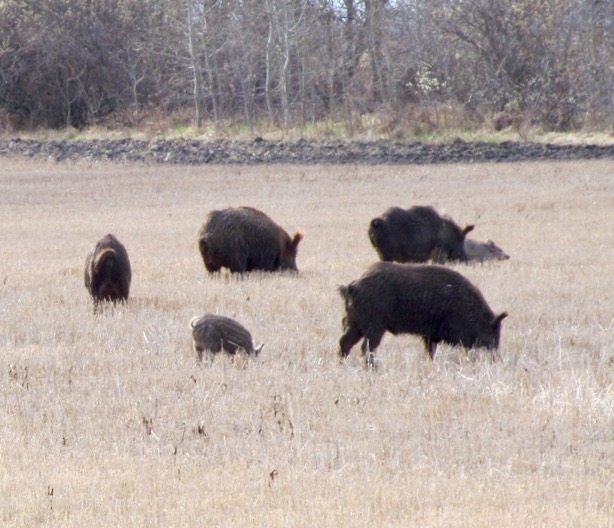 Super pigs are running wild in Canada’s West. Can hunters be part of the solution?

Super pigs—that’s what wildlife researchers are calling the invasive European swine that have somehow managed to defy all predictions and gain a foothold in Western Canada. They were first brought to the region in the late 1980s, with the hopes of creating a new market for meat, as well as niche high-fence hunting opportunities. As pigs are notorious for doing, some of the newcomers escaped their enclosures. There was little concern at first, with most experts believing the animals would not survive the brutal prairie winters. Well, not only have they managed to survive, they’ve also thrived.

While there are no accurate population estimates on the elusive creatures, what is known is that they are expanding their range at a rapid rate. In the early 1990s, wild pigs were only found in 27 watershed areas across the prairies; today, they are in more than 1,000. With sows capable of breeding twice a year and averaging six piglets per litter, the numbers are definitely in the hundreds of thousands—possibly more—across Manitoba, Saskatchewan and Alberta.

Not only has their range increased, so, too, has their average physical size. In their native European habitat, big boars top out at around 200 to 250 pounds, but in the prairies, boars weighing up to 600 pounds have been trapped, and reports of pigs in the 400- to 450-pound range are common. It’s believed the increase in size is the result of adapting to our colder winters.

Unlike wild boars found in the U.S. that descended from a domestic heritage breed of pig, our Canada’s invasive swine only have a slight amount of domestic blood in their genetics. That essentially ensures their survival instincts have remained keenly intact, challenging wildlife managers at every juncture in their attempts to control populations.

Trapping has been relatively successful, although experts warn that unless an entire group—known as a “sounder”—is captured at the same time, any escapees will learn from the experience and likely avoid getting tricked again. Saskatchewan has enjoyed some success by radio-collaring a trapped pig and releasing it, letting it lead them to an entire sounder. They then shoot the group from a helicopter. Such government control methods are expensive, however, and with budgets being slashed, more economical methods are being looked at—including the use of hunters.

One county in Alberta tried offering hunters a $50 bounty for each pair of pig ears they turned in, but officials disagree on the effectiveness of that method. Again, these pigs are highly intelligent, and shooting one or two out of a sounder can make the rest more wary and nocturnal. Texas has had success by shooting hogs at night using infrared sights and noise-supressing rifles, but that’s not a legal option here in Canada. As it stands, hunting does not seem to be an effective means of control here.

Interestingly, some hunters are as tight-lipped about where they’re seeing wild hogs as they are about their favourite big-buck haunts—even though this invasive species is capable of causing extensive environmental damage. They’re viewing the pigs as a year-round hunting windfall, and they’re not will to share. Even some landowners have been somewhat reluctant to grant access for hog hunting.

As populations increase and damage to crops becomes more extensive, however, this attitude will likely change. Experts warn the problem is only going to get worse, after all, unless aggressive government-funded eradication steps are taken.

The good news for hunters is that they’re unlikely to be cut out of the war on wild boars, and I can’t see the current regulations—or lack thereof—changing much. The bad news is, I also can’t see governments relying on hunters to rein in the burgeoning pig populations. Again, hunting just isn’t effective.

Saskatchewan currently has the most widely distributed feral pig population, but Alberta and Manitoba aren’t far behind. The N.W.T. is already planning for the eventual arrival of the pigs, and a few localized populations exist in B.C., as well as southern Ontario. This much, at least, everyone agrees on: super pigs will be around for the foreseeable future.