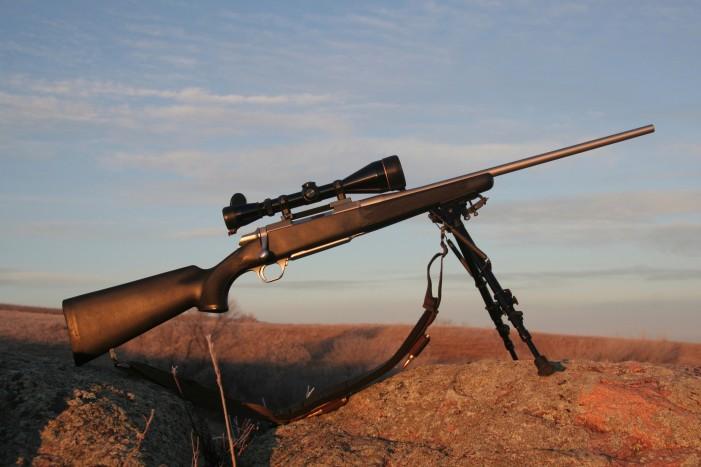 The benefits of using a shooting stick

On a recent trip to Africa, I was still-hunting deep valleys for nyala, a secretive spiral-horned antelope. From an open ridge top, I caught a slight movement in the thick cover across the deep gorge below. My binoculars revealed a fine bull staring intently at me, and I knew I had little time before he’d disappear into the dense cover.

My professional hunter quickly set up his ever-present shooting sticks, I settled my forestock into them, found the bull’s chest, gently squeezed the trigger and secured my trophy. It all happened within 20 seconds, and without the shooting sticks, I’d never have attempted the 225-yard shot, much less made it.

All hunters know the value of a good rest when the time comes to take that important shot. In much of Canada, there’s a wealth of natural rests, from boulders to branches. Not so in open country. Whether hunting the prairies for antelope, the tundra for caribou or the mountains for elk, shots can arise quickly and natural rests can be few and far between. That’s when there’s no substitute for shooting sticks.

The bipod: The shooting sticks I used in Africa were simply three wooden poles strapped together to form a tripod. Here in North America, however, the majority are commercially made. The one most commonly used is the Harris bipod, a unique folding rest that attaches to the rifle’s front sling swivel. When not in use, the telescoping legs just fold back along the rifle stock.

Such bipods that affix to your rifle are ideal in wide-open country, especially when you need to shoot lying down. As for the extra weight, it’s a reasonable trade-off for an ever-present shooting platform. On the downside, they tend to get caught up in brush.

When I lived in Alberta’s southern prairie, I always had a Harris attached to my rifle—without it, I’d have enjoyed far fewer successful mule deer and antelope hunts. At the time, it was one of the few commercial rests available.

The alternatives: Today’s hunter has far more choices when it comes to shooting sticks, from a range of rifle-mounted bipods to freestanding bipods, tripods and monopods for sitting or standing. There are also several design options—some rests have leg sections that screw together, for example, while others feature one-piece telescoping legs. Still others sport sections of aluminum tubing held together with an internal bungee cord, much like a folding tent pole. And some are solid wood, mimicking the hand-crafted originals of Africa.

Each style has advantages and disadvantages—it’s really a case of personal preference. As a general rule, the more legs, the steadier the rest. With additional legs comes more weight, however, and sometimes a longer set-up time.

Shooting sticks for standing shots can also perform as hiking staffs, although some hunters find it too inconvenient to have one hand continually tied up when walking. Full-length sticks can also be used to help steady spotting scopes or binoculars; some even have interchangeable heads with standard mounting screws for scopes and cameras.

Of course, if you’re wearing a pack, you can easily stow a collapsible model. Although this will mean more set-up time, most shooting situations will allow for the extra few seconds. Alternatively, you can carry your sticks in your pack until you get to your hunting territory, then carry them by hand.

When it comes to shooting sticks, there are plenty to choose from. Survey the various manufacturers to find the model that best suits your needs.