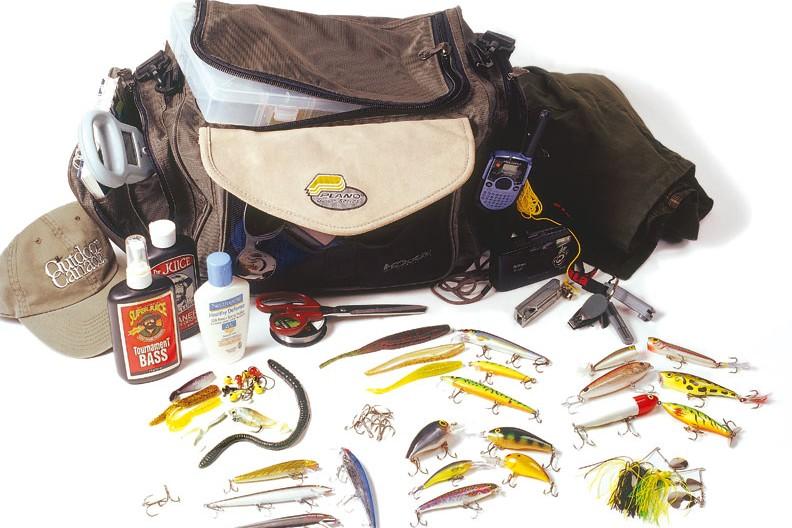 From topwaters to spinnerbaits to soft plastics, everything you'll ever need to tackle lunker smallies

Choosing the contents for the ultimate smallmouth tacklebox, or tacklebag, is in some ways as difficult as selecting a gold medal hockey team. Just as a top-notch hockey squad needs the right mix of skilled players and enforcers, a properly stocked tacklebag needs the right mix of search baits and finesse lures. Notice I use the term tacklebag? That’s because the best way to organize your lures is in plastic, waterproof trays that stack into a soft, nylon tacklebag. I dedicate a tray to each of the different lure types—incorporating various sizes, colours and weights—and pack them into my bag with the jigs on the bottom and the surface baits on top. Then I’m ready to score some big bass.

Topwater lures are often called the “10 per cent solution” because that’s about the percentage of time they’ll coax smallmouth bass to the surface. But when the bass do surface to smack a stickbait or popper, you’ll think you’ve died and gone to heaven. The ideal times to toss topwater lures are early in the morning or later in the afternoon, during calm, overcast days when the wind isn’t blowing heavily, and when the fish are in shallow to moderately deep water with a temperature of at least 50ºF. Remember, topwater lures have no built-in action, so it’s up to you to impart the zigs and zags and other lifelike motions during the retrieve.

Walking baits, such as the Skitter Walk and Zara Spook, are great search lures for big bass (they excel in deeper water). Cast one out as far as possible, then let it rest until all the surface rings disappear. Point your rod tip toward the water and snap the slack out of your line with your wrist. Develop a cadence and you’ll notice you can move the bait in the distinctive, rhythmic, walk-the-dog motion for which these lures are famous. You can walk stickbaits back to the boat at just about any speed or you can rest the lure during the retrieve. Try experimenting to see what the fish prefer.

Prop baits (such as the Skitter Prop), on the other hand, excel when there’s some wind on the surface, at night or when the water is dark, stained or muddy. Cast the lure beside a rock, dock, log, boulder or fallen tree and let it rest for a second. Then rip it two to three feet using a series of erratic twitches and let it pause. Experiment with the speed and power of the rip and the length of the pause.

Poppers, meanwhile, such as the Skitter Pop, Pop R and Chug Bug, are generally more subtle topwater lures, ideal when you find smallmouth bass in shallow, clear water and you don’t want to spook them. Cast out a popper, let it rest for a few seconds and then snap your line so the concave face of the lure spits water and makes a distinctive popping sound. Let the lure rest before you continue popping it back to the boat. As with most lures, it pays to fine-tune the speed and noise of the retrieve and the length of the pause. And when using topwaters, remember not to react to a fish’s initial splash; instead, wait until you actually feel the fish before you set the hooks.

If smallies are feeding near or on the surface, go with a jerkbait, especially if the bass are targeting pelagic baitfish, such as smelt, ciscoes, shiners and alewives.

Fish hard- and soft-plastic jerkbaits around rocky structure (points, bars, sunken humps and reefs) adjacent to deep water, especially structures on the windy side of the lake or river. Crank, sweep or rip hard suspenders down to their maximum running depths (generally six to eight feet), pause your retrieve, then crank, sweep or rip them again. This tactic is the most productive option, but, as usual, you need to experiment with the length of the pause-some days smallies want the lure to hover for an interminable amount of time, while other days they prefer short interludes. A more subtle twitch-pause-twitch retrieve works best for soft-plastic jerkbaits, which sink during the pause—a presentation that works many days when hard lures don’t. Try experimenting with the size and colour of your hard- and soft-plastic jerkbaits until you match the size, colour and profile of the prevalent baitfish in the lake, river or reservoir.

Also fish soft-plastic jerkbaits (weedless, using a Texas-rig) on top of, down into and along the edge of deep weeds. Twitch the lure to make it look like a dying baitfish and lengthen the pause so it flutters into every weed pocket you can see.

Spinnerbaits are effective any time from late spring through fall when smallies are feeding aggressively.

Use spinnerbaits in clear water around rocky structure, especially when the wind is blowing. Smallmouth bass will scoot up 10 feet or more to grab a spinnerbait burned just under the surface.

You can also cast a spinnerbait into the centre of a reed bed and retrieve it moderately fast so that it’s in the upper third of the water column as it returns to the boat. And since spinnerbaits are relatively weedless, ricochet the lure off the reed stalks to get some extra attention.

Throw a crankbait when the smallies are relatively shallow or moderately deep and feeding aggressively. Also use them during stable weather or if the water is stained or slightly dirty.

Crankbaits are contact lures, so you need to bang them into the bottom, hit objects and ricochet them off any structure that the bass are relating to. Choose a crankbait that dives slightly deeper than the water you’re fishing. When you feel it hit something, stop your retrieve and let it rise. Then crank it back down and run it into something else. Smallies almost always hit when the bait is rising.

Small crankbaits, especially those with built-in rattles, are often the best smallmouth bass lures for rivers. Cast them across current to structure, cover and eddy breaks. Crankbaits bang rocks and make noise, and generally make it easy for smallmouth to see, hear and feel them in moving water situations. In addition, crayfish are usually the predominant forage in rivers, so a wide-wobbling, noisy, bottom-banging, crayfish-coloured crankbait is hard to beat in current, where smallies have little time to inspect a lure.

To present a different look, floating minnow baits can be used at the same times and in the same places as both topwater lures and suspending jerkbaits.

In situations where you’d use a topwater lure, make a long cast with a floating minnow bait, then let it sit on the surface until the rings have disappeared. When your nerves are about to snap, twitch the lure once so it wiggles in place, then pause. If you don’t get a hit (usually during the pause), slowly retrieve the lure a foot or two and repeat the procedure. Floating minnow baits fished this way tend to work better than topwaters when the bass are feeding on baitfish.

In situations where you’d toss a shallow jerkbait, cast a floating minnow bait toward cover and retrieve it using a combination of twitches, jerks and pauses. While suspending jerkbaits hover once you stop your retrieve, floating minnow baits slowly float to the surface when you stop. Many days, that’s just the way picky smallies want it.

When to fish ’em

Any time, but especially when smallmouth are inactive, uncooperative or pressured. A jig and plastic trailer is usually the best lure to use after a cold front or when you spot one or more smallies following another fish to the side of your boat.

Nothing imitates a live crayfish (a smallmouth’s favourite food) better than a 1/8-ounce to 3/4-ounce brown-, green- or watermelon-coloured tube jig (the weight depends on the depth you’re fishing). Tubes are deadly when dragged on the bottom of a lake, river or reservoir along the edges of deep weedlines and the hard/soft transition areas that border the rocky structures smallmouth bass frequent. Also toss a brightly coloured tube on a heavy jig head to followers (smallies are notorious for this). Let it sink, then hold on.

When smallmouth bass are milling about the flats in shallow water and feeding on shiners and minnows, but won’t come up to take a topwater lure or jerkbait, a jig tipped with a three- to five-inch twister tail is unbeatable. So is a do-nothing retrieve. Simply cast out the jig-and-grub combination, let it settle to the bottom and reel it back to the boat in a horizontal manner, imparting no additional jerks or motion. Works like a charm, though you may need to experiment with jig head weights, retrieve speeds and grub sizes and colours.

Finally, when smallies are locked on the bottom, swim or crawl a jig and a small, soft-plastic grub, worm, leech, crayfish or lizard along the bottom. Use a subtle lift-pause-drop retrieve, never letting the lure travel more than a foot off the bottom.