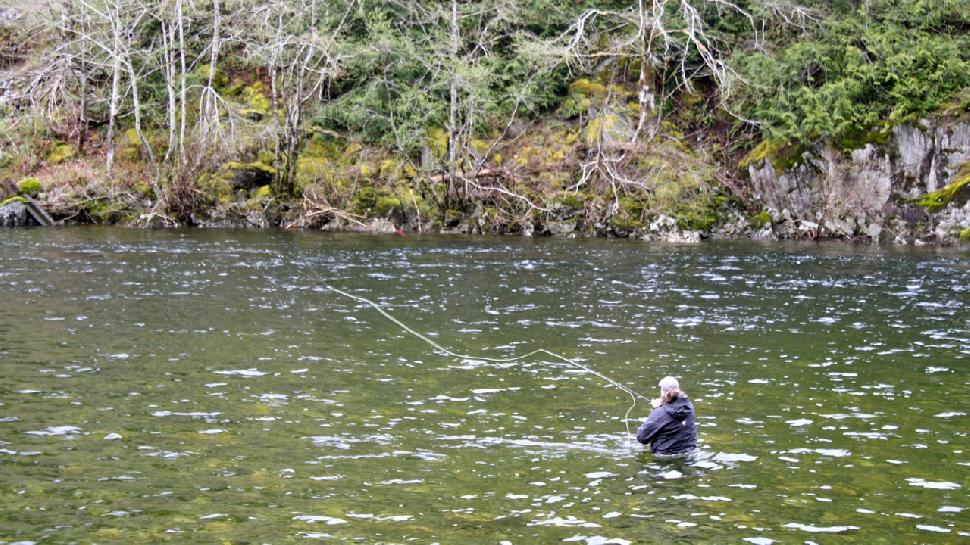 The wet-fly swing: a simple and classic fly fishing technique

Five hours into my very first fly-fishing trip, I was fishless and frustrated. I’d spent the previous winter tying flies with my school club and reading all I could on fly fishing. But the real-life river was nothing like in the books, and I had no idea where or what to cast.

I was close to quitting when our club leader, French teacher Mr. Damato, strolled into view. Hearing I’d struck out, he took charge. Following his instructions to the letter, I tied on a Leadwing Coachman wet fly, cast 45 degrees down and across a shallow, riffly bend, and held the line tight as the fly swung across the current. A few casts later, I was releasing a seven-inch rainbow, followed by several more.

That was my introduction to the wet-fly swing—a simple, classic technique that has rarely failed me in the almost three decades since. Here’s why.

For centuries, anglers have been fishing sunken flies across and downstream on a tight line. But as we’ve learned more about aquatic insects, and how trout feed on them, this technique has fallen out of fashion. Today, the dominant method of subsurface fishing is nymphing, where great care is taken to dead-drift the fly as naturally as possible with the current. This is effective, but tricky.

With ye olde wet-fly swing, however, the force of the water pushing the fly line—the dreaded “drag” in fly terms—causes the fly to dart across the current. Whether this action imitates an insect rising to the surface or a fleeing baitfish, it remains a deadly way to present flies.

With the wet-fly swing, the fly is in action the entire time it’s in the water, making the technique a fast, efficient way to cover large sections of river with numerous fish-holding lies. It works in all types of water, from brisk riffles to slow pools, throughout the open-water season.

The swing is limited, however, to water no deeper than six feet—any deeper and the fly won’t get down far enough during the swing.  Steelheaders and Atlantic salmon anglers especially favour the technique, but it’s effective on any river-dwelling fish that will take a fly.

No special gear is required for the wet-fly swing, though longer rods in the nine-foot range make it easier to control the line. Use a floating line and an eight- to 10-foot leader. For flies, choose generally imitative patterns that look alive in the water. Winged wets—the Leadwing Coachman and March Brown, for example—are the classic choice. That said, soft-hackle patterns such as the Partridge and Orange or Brown Hackle are as good or better, as are any small baitfish-imitating streamers. Two-fly rigs are also effective with the wet-fly swing.

Cast across and slightly downstream. The current will quickly begin pushing on your line, forming a bow, or “belly,” which speeds your fly through the water. Typically, a slow swing is better, since tiny insects and baitfish can’t zip across the current like a torpedo.

To slow your offering and keep it in the strike zone longer, you may need to mend the line upstream. Follow the fly with the rod tip, mending as necessary, and let it swing until it hangs in the current below you and begins to rise. This is the point most fish will hit, and since the line is tight, they often hook themselves. If there’s no strike, take a step or two downstream or lengthen your cast by a few feet, and repeat the process until you’ve covered all the water.

Because flies are swung on a short line—typically 20 to 30 feet—and there’s no weight or bulky indicator on the leader, casting is a breeze. This makes the wet-fly swing a technique that both veterans and novices alike can use. Believe me, if a nervous, uncoordinated 15-year-old with hand-me-down Diefenbaker-era gear could catch a bunch of little rainbows with the wet-fly swing, you can, too.

It’s been 29 years since associate editor Scott Gardner was that nervous, uncoordinated 15-year-old.