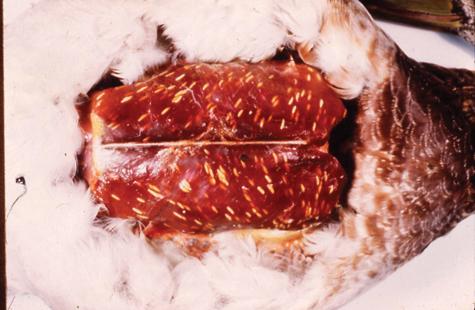 Found something, well, disturbing in your game meat? Chances are, it’s still okay to eat. What you should know about bird parasites, diseases and injuries.

Rare is the duck hunter who doesn’t, at some point, find what look like grains of rice sprinkled liberally throughout the breast meat of a bird, most often a shoveler, mallard or gadwall. These growths are sarcocysts, and may contain hundreds of immature, single-celled protozoa of the genus Sarcocystis. Many waterfowlers unknowingly eat lightly infected birds that have been plucked rather than skinned. These are also common in many mammals, but they’re usually too small to be noticed. As with many of these infections, though unsightly, they don’t harm the bird, and pose no risk to hunters. Discarding infected breasts is a waste of fine table fare.

Avian botulism is a paralytic disease caused by the ingestion of a toxin produced by the bacterium Clostridium botulinum in low-oxygen environments, such as lakebed sediments. Outbreaks of botulism can result in the deaths of thousands—even tens of thousands—of waterbirds, usually in late summer before hunting seasons start. 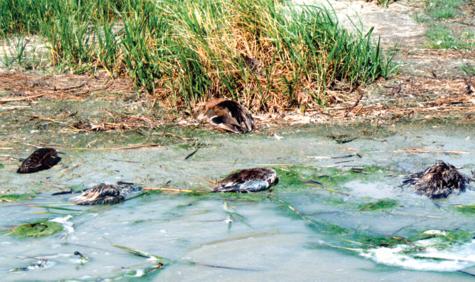 Alberta Fish and WildlifeThere are no associated human risks, though naturally you shouldn’t consume birds found dead or showing obvious signs of distress. The type of botulism that infects waterfowl is quite distinct from the botulism poisoning that people can get from eating contaminated foods.