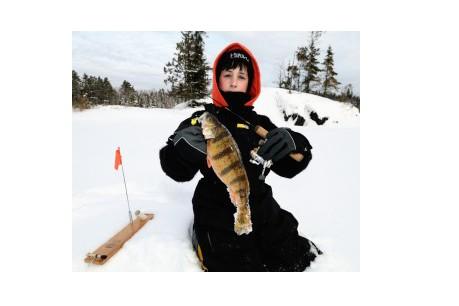 Tip up tactics for panfish

A week or so ago, I posted a few images online of my 10-year old grandson, Liam, proudly posing with a couple of the almost two-dozen giant yellow perch we caught jigging lures on a recent cold, frosty day.

Interestingly, in the background of the one of the images was a tip up—one of the unique HT Ice Rigger models—which sparked a great question from Outdoor Canada reader and friend, Ted Cawkwell, from Saskatchewan.

In his message, Ted mentioned it was unusual to associate panfish, such as yellow perch, with tip ups and so, he asked if I would provide a few details about how I use them while fishing for non-traditional tip-up species.

As I mention in the short video below, since you’re allowed two rods while ice fishing in most provinces, I almost always set a tip up over the second hole, whether I am fishing for walleye, lake trout, yellow perch, black crappies, and even whitefish. But, unlike most other ice anglers, I almost never use live bait. Instead, I jig both lines.

It is a unique system that, to be honest, I haven’t seen any other ice anglers use, as most folks jig one hole and set a live bait/static line in the second one. I know that system works, but I’ve had much better success over the years using the two jigging rods set up that I’ve detailed in this video.

Anyway, give it a watch and let me know what you think.