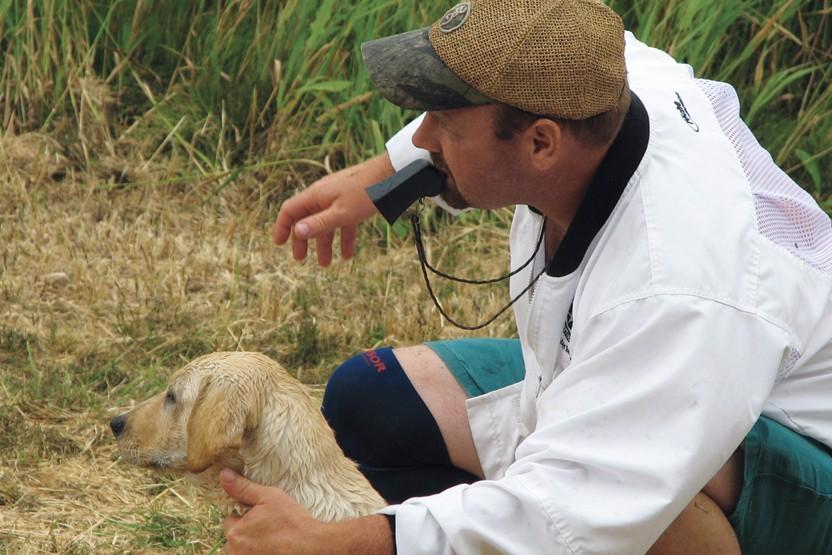 How to make your dog a winner

A lifelong hunter, Shawn Arney first experienced the pleasure of waterfowling with a well-trained dog thanks to the Lake Ontario Hunting Retriever Club. Inspired, he began training his first purebred. Fifteen years later, he has eight Grand Nationals under his belt. When not keeping the peace as a Durham Region police officer, 43-year-old Arney operates Oakridge Retrievers near Port Perry, Ontario, training dogs and helping hunters turn around underperforming pooches. Here are his tips to make your dog a winner.

The biggest problem Arney sees is inconsistent handling. He says it’s essential to use the same set of commands for the dog’s entire working life, and to always demand and reward obedience to those commands. “I’ve told guys for years that if you’re consistently bad, training will take longer, but as long as you’re consistent, you will get there,” he says.

Arney recommends getting a well-bred puppy from working, rather than show, stock, with field trials or hunting titles in its pedigree. And it’s important to start training early—even though an eight-month-old Lab looks immature, he has nearly the same mental ability as an adult dog. Just 10 to 15 minutes a day of hailing drills will instill the fundamentals, Arney says. But if you let a pup run wild, teaching him hunting skills and breaking bad habits when he’s bigger will be that more difficult.

If you have to hail a pup more than five times, don’t praise him when he finally obeys. That just instills bad habits. Instead, train the pup on a lead so you have full control and can make him come when you call. Then when he obeys on the first command, give him a treat and praise him abundantly. This same basic pattern applies when working on more advanced skills. Praise is an essential aspect of consistent training, says Arney, but many handlers don’t do it nearly enough. “From square one, I teach them that if they come back with a bird, Dad likes it, and they get a lot of praise, which makes a dog feel like the king of the world.”

If you’ve been sloppy in your training, don’t worry—your dog can be fixed. It just takes time. Although Arney relishes helping other hunters, he won’t offer advice until he first meets the dog to see what the owner has or hasn’t accomplished. “After 15 years in this game, when I look into a dog’s eyes I pretty well know if he’s understanding or not,” he says. If the dog understands, you reinforce. If not, you need to break things down and simplify. Says Arney: “As soon as he gives me something, even if it’s not totally correct, I say ‘Good dog,’ and a light comes on for him.”

I pretty well know if he’s understanding or not,” he says. If the dog understands, you reinforce. If not, you need to break things down and simplify. Says Arney: “As soon as he gives me something, even if it’s not totally correct, I say ‘Good dog,’ and a light comes on for him.”