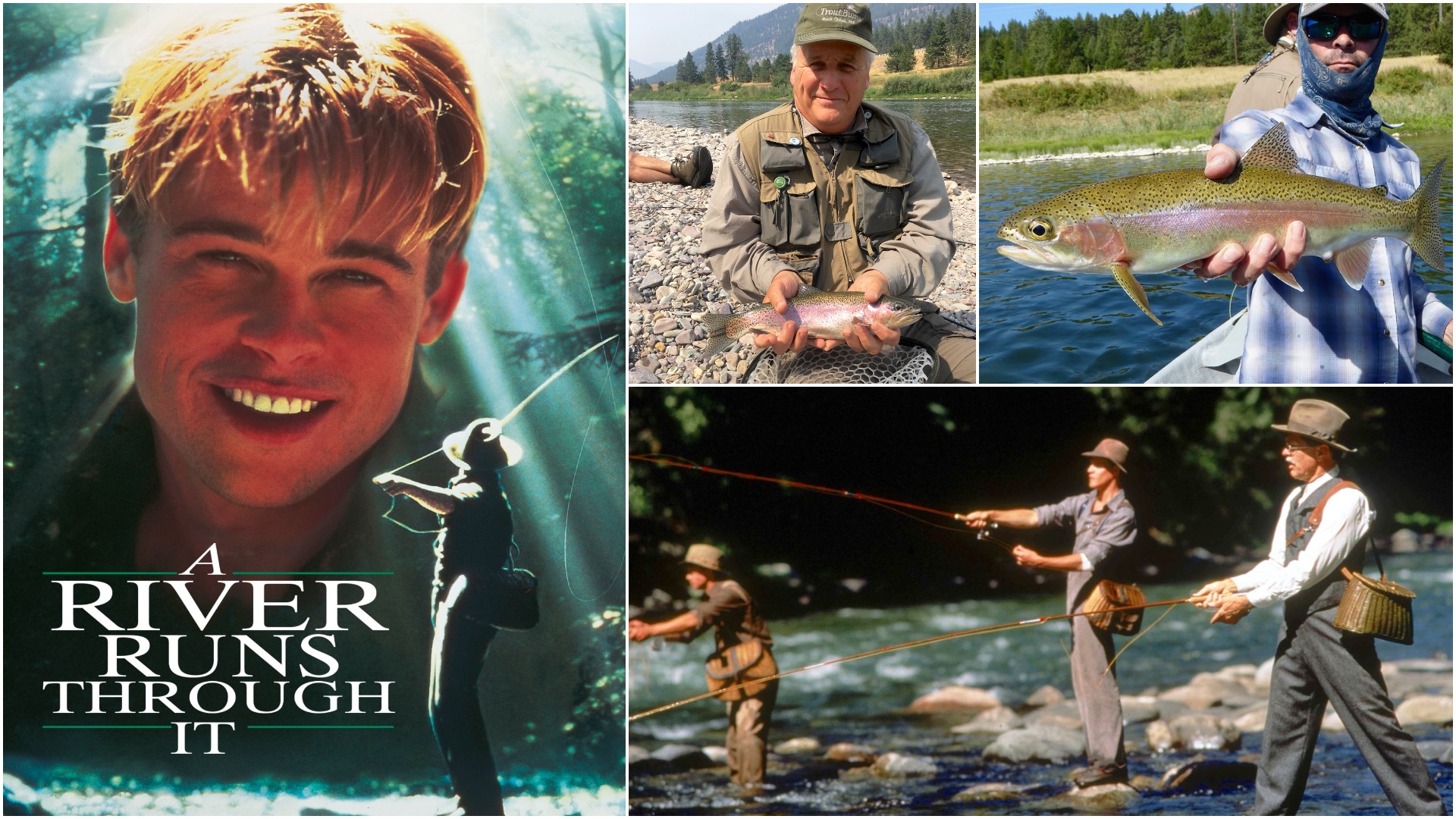 I knew I was definitely in Montana when I passed a billboard on Interstate 90 promoting Rock Creek’s upcoming “Testicle Festival.” North of the border, we refer to these little beef appetizers as “prairie oysters.” In Big Sky Country, where a local fisherman told me “drinking beer isn’t really drinking,” you can’t be squeamish about eating a bull’s balls and chasing them down with a shot of whisky.

But I hadn’t ventured to Montana last summer to partake in that aspect of the local culture. Instead, I had flown halfway across the continent to fish some of the waters featured in director Robert Redford’s classic film A River Runs Through It. It had been 25 years since a young Brad Pitt fought and fished his way through the Oscar-winning adaptation of Norman Maclean’s short novel, and wading in his footsteps seemed like a fitting way to commemorate the milestone.

It turned out that every fisherman, guide or outfitter I met seemed to have some connection to the movie. And as I was to discover, A River Runs Through It has as much informed public opinion about the sport of fly fishing as it has about Montana itself since first hitting the big screen on October 9, 1992. As one local resident told me, “That film changed the state forever.”

Hollywood blockbusters often spawn their own myths. Before visiting Montana, I had already learned A River Runs Through It was not completely faithful to its namesake novella about Maclean growing up fly fishing with his reverend father, John Maclean, and brother, Paul. Nor was it faithful to the audience. Viewers are led to believe all the fishing scenes take place, per the novella, on the Big Blackfoot River, which connects with the Clark Fork in Bonner, just outside of Missoula. However, when filming took place in late June and early July of 1991—a year after Maclean passed away just shy of 88—the pools and rapids chosen for the movie were frequently not the Big Blackfoot. They were the upper Yellowstone, the Gallatin and the Boulder, all of which are closer to Livingston and Bozeman, several hours away by car. And the famous waterfall scene where the crazy young Maclean brothers nearly perish is actually Granite Falls in Wyoming.

During lunch breaks while drift fishing on the lower Clark Fork, I heard different explanations about the location changes. According to some local guides, Redford said the Big Blackfoot was not in “good shape” in the early ’90s. As a film purist and ardent environmentalist, he wanted to film a river as clean as a Montana stream might have looked back in the years between 1914 and 1929. Another guide told me that Redford had asked for support from the Missoula Chamber of Commerce for his crew’s accommodations, but the city balked, so he changed locales. Both versions may be true.

Although Redford might not have been totally authentic in his use of filming locations, he wanted to use authentic fishing tackle for the movie, insisting on authentic bamboo rods. The word is he even hired Len Codella, of Codella’s Heritage Sporting Collectibles fame, as his fly-fishing consultant. Actor Tom Skerritt’s character, Reverend Maclean, consistently lands the biggest fish during the river scenes using an eight-foot six-inch Granger cane rod. Two other cane rods apparently broke during the famous shadow cast scene, when Pitt’s character, Paul Maclean, teases the trout by waving a fly in long casts back and forth across the river (a still of this graces the cover of the film’s DVD case). Notes from the crew indicate a graphite Hexagraph rod was finally substituted for the shoot.

Other gear and prop stand-ins were not always successful in the movie. Redford did not want any trout harmed during the filming—especially fish from the local rivers—so he used pond-raised trout and had a monofilament line attached to their lower jaw when they were landed. That would be fine, except if you slow down the movie, you can actually see the mono in a few frames. And Paul’s big rainbow in the film is actually two different fish, while his brother Norman’s reel mysteriously changes during some of the fishing scenes.

The genesis of the book and movie connection appears to reside with famed Montana writer and outdoorsman Thomas McGuane, although in an e-mail to the Bozeman Daily Chronicle, he said it was all “an accident.” The story goes that Redford was visiting McGuane in 1981 and they were chatting about books by western writers whom they both admired. As it turned out, Redford had not read A River Runs Through It. “I gave him a copy,” McGuane says, “and the rest is history.”

Well, not quite. As Redford explains in his introduction to Richard Friedenberg’s book A River Runs Through It: Bringing a Classic to the Screen, making the film was a long and challenging process. It seems that Maclean himself was “not easy to approach.” When a representative visited him to chat about the film rights and to go fishing, for example, Maclean turned him down because he showed up without a fishing licence. 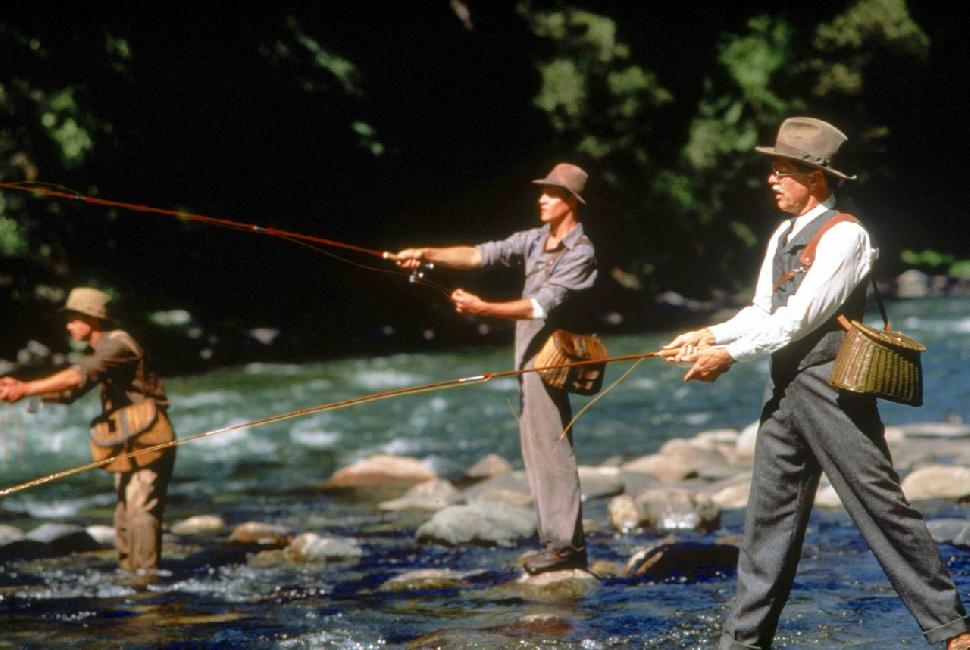 Finding good actors who could fly fish was another one of the many challenges for Redford. Indeed, none of the film’s principal actors—Pitt, Craig Sheffer and Skerritt (above, left to right)—had ever fly fished before. So, they were taught how to roll-cast and set a hook by George Croonenberghs, a retired railroad engineer who had been a close friend of Paul’s in nearby Missoula. He apparently learned to fly fish from Reverend Maclean (who, incidentally, was born in Pictou, Nova Scotia).

Pitt practised his casting technique—frequently on top of a building in Los Angeles—for four weeks before filming began. Redford got other help and advice for the actors from K.C. Walsh, owner of Bozeman-based Simms Fishing Products, and John Bailey, owner of Dan Bailey’s Fly Shop in Livingston. Redford was clearly tipping his hat to the words of Maclean in the early pages of A River Runs Through It: “Nobody who did not know how to fish would be allowed to disgrace a fish by catching him.”

In our runs through the pools and rapids of the lower Clark Fork (above), the guides continually reminded me of other lines from Maclean’s novella. “Until a man is redeemed, he will always take a fly rod too far back,” goes one, which was echoed whenever I flubbed a cast. Then there was the admonishment, “The fly and transparent leader must be ahead of the heavy line when they settle on the water.” And when Paul catches more fish than his brother or father because “he had his flies in the water more than anyone else,” well, I heard those words before we even settled in the boat and left shore.

Yet another line from the novella is about the presence of other fish in Montana’s fabled waters. On the second day of my four-day trip, the indicator on my dropper-fly nosedived and my rod bent sharply. I was standing onshore, and the guide came running with his net. Line peeled off as the fish headed for deep water, and after some tense minutes of fighting, the guide and I looked into the water trying to figure out what was about to be landed. When we caught a glimpse of gold, my heart leapt at the possibility of a big brown trout. Sadly, it was a sucker. That would make two of us.

After its 1992 release, A River Runs Through It went on to gross $43 million in box office sales in the U.S. alone. It was a spectacularly beautiful film, and it deservedly won the 1992 Academy Award for Best Cinematography. It was also nominated for Best Adapted Screenplay (by Richard Friedenberg) and Best Music, Original Score (by Mark Isham). It even spawned a movie for movie buffs: Shadow Casting: The Making of A River Runs Through It. Multiple new editions of Maclean’s book found their way into print, including a mass-market paperback with a photo of Pitt shadow casting on the cover.

All of these incarnations have had a profound effect on fly anglers, and on the state of Montana and its inhabitants. The three cornerstones of the state used to be logging, mining and farming, but now the major industry is tourism. Like this writer, many fly anglers travel great distances to what’s become the mecca of the sport. With tens of thousands of kilometres of pristine water, and enough trout species to please almost any angler, Montana is also now the go-to destination for guides, outfitters and lodge developers.

In 2015, a study by Montana Fish, Wildlife and Parks found that anglers and hunters contributed an astonishing $1.26 billion to the state’s economy. As a result of this tourism boom, Montana—sometimes referred to as the “last best place”—predicts its job market will grow by almost 40 per cent over the next 10 years. A River Runs Through It can take much of the credit for all this.

Money aside, the most important lessons of Maclean’s novella and the ensuing film continue to haunt those of us who often make excuses for the reasons we don’t catch more or bigger fish—rather than simply practise our casts and learn to read the water. “Many of us probably would be better fishermen,” Maclean wrote, “if we did not spend so much time watching and waiting for the world to become perfect.”

And as Maclean tells us when Paul catches his glorious trout in the film’s big fishing scene, “All good things come by grace, and grace comes by art, and art does not come easy.” Happy anniversary to A River Runs Through It.

Don Sedgwick lives in Petite Riviere, Nova Scotia. Fishing in Montana has now been happily crossed off his bucket list.