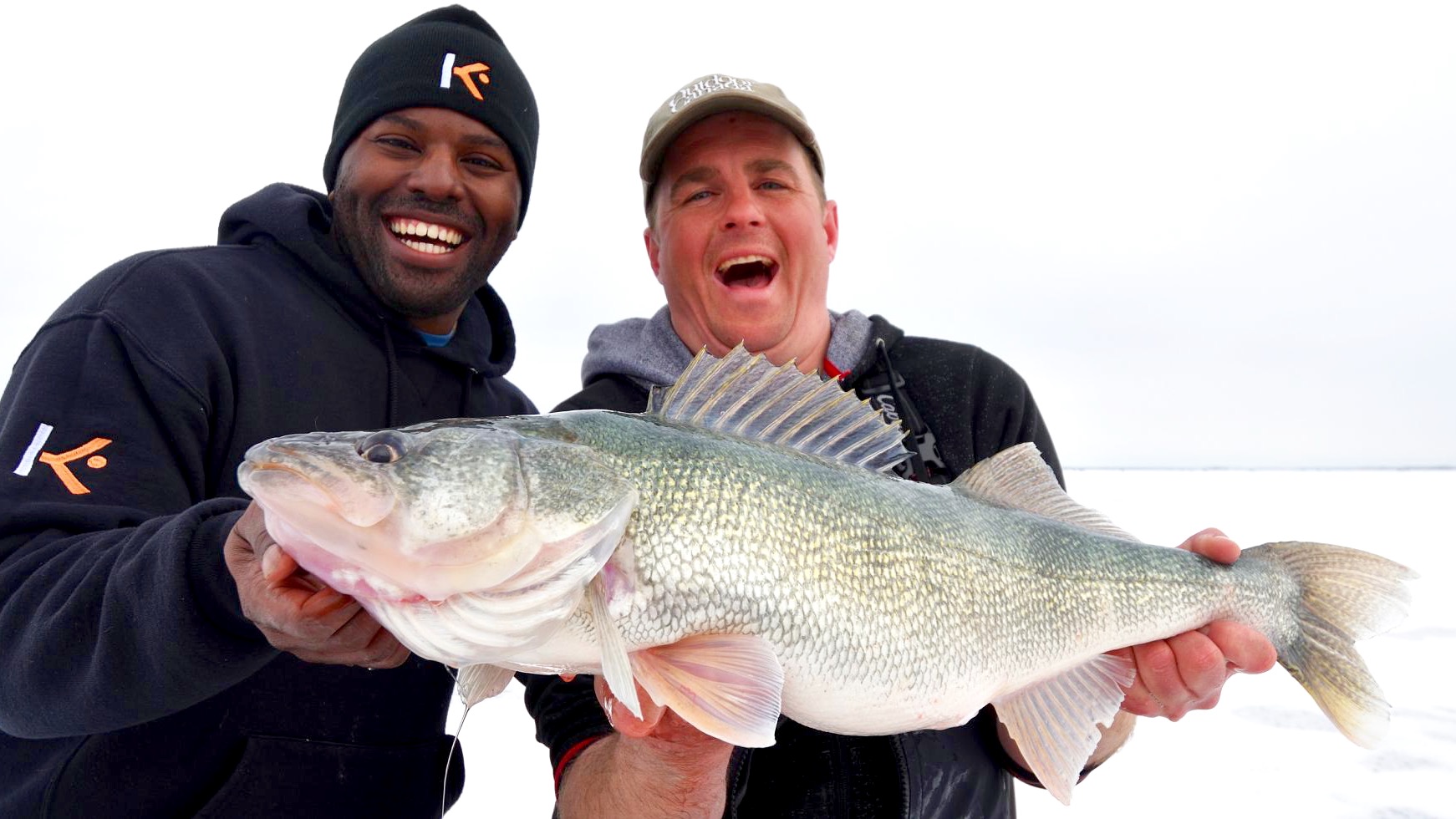 Sometimes ice fishing is so crazy, you just can't make this stuff up

When it comes to ice fishing for walleyes, the truth is often stranger than fiction.

Ten of us were out on Lake Winnipeg last weekend, jigging for walleyes and as is typically the case in the winter, we had drilled our holes close enough to one another that we could walk back and forth and visit, as well as chat, compare notes and, well, give each other the good natured gears when someone swings and misses a fish. It is the social side of ice fishing that doesn’t seem to happen as much in the open water season.

Oh, yes, and talking about swinging and missing, that is precisely what buddy Theo Toliver did when he spotted a bright red mark on his sonar screen, felt a bump and set the hook hard. Hard enough that he bent his rod tip into a perfect semi-circle and felt a big throbbing fish. But, then, his line went suddenly slack and Theo wound up the end of his string that sheepishly dangled and flapped in the breeze.

Oh, oh – talk about giving the boo birds and peanut gallery more fuel and ammunition. (Note to Theo: they don’t award medals for self inflicted wounds.)

Theo was adamant that he had snapped his line on a big walleye, but I have to confess, I suspected a giant pike had wrapped its tooth filled mouth around his rainbow trout coloured Kamooki Smartfish and snipped his line like it was sewing thread. 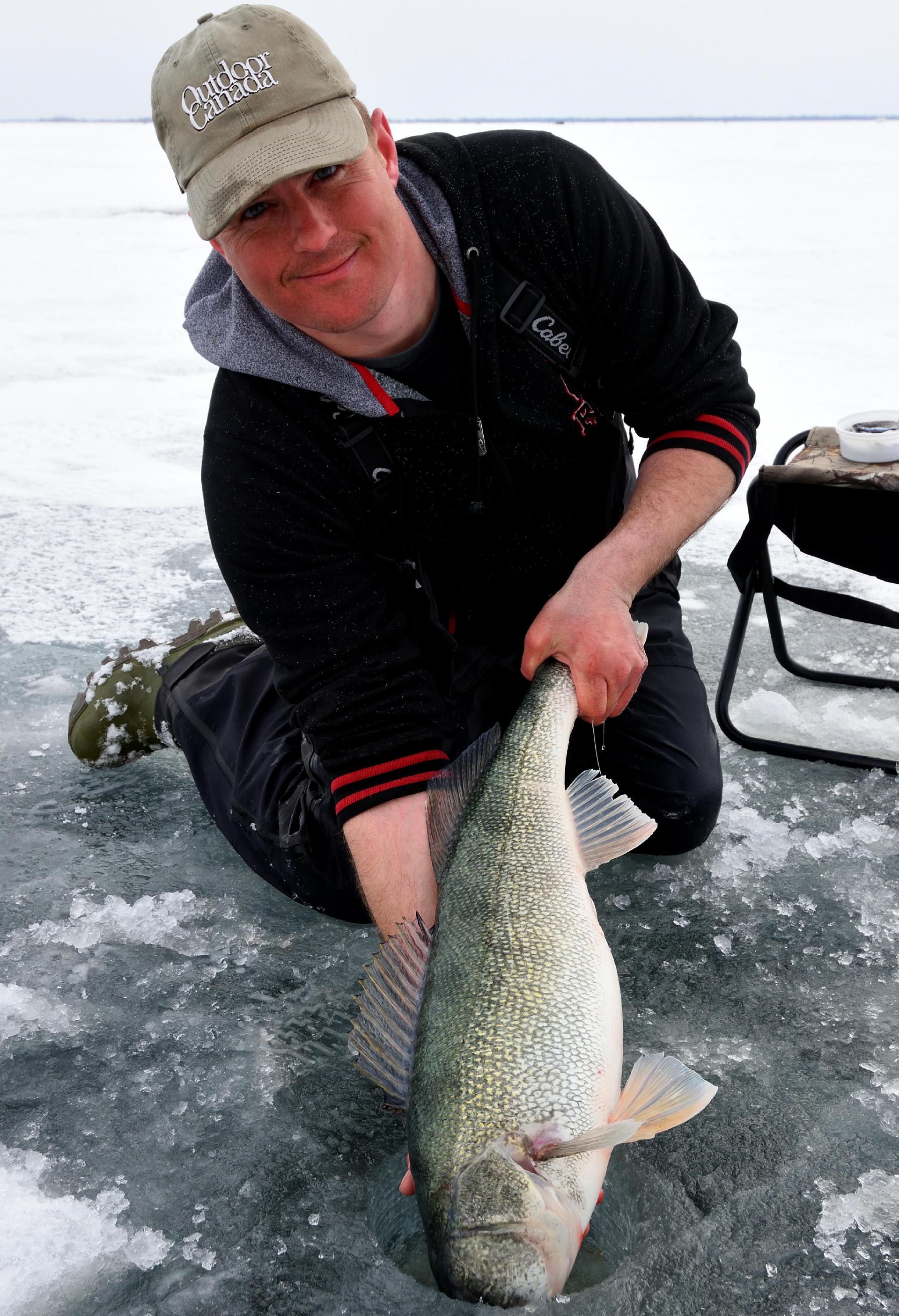 Only a minute or so after Theo swung and missed, buddy Jordan Thompson watched a bright red mark appear on his screen and it, too, clobbered his identically coloured rainbow trout Smartfish.

And it was obvious, from the dangerously curved rod and throbbing tip that this was one heck of a greenback. Jordan fought the fish up to the hole and then with a crowd of hecklers offering absolutely unsolicited advice, someone slipped a hand under the fish’s gill plate and hoisted it up onto the ice.

Talk about a gorgeous greenback. Quite simply, one of the fattest walleyes—obviously an egg laden female sporting a 19-inch girth—that I’ve ever seen. And weighing in at 13.95 pounds—heck, let’s call it 14-pounds—it was a beast. It was Jordan’s personal best, and I bet he’ll have a hard time beating it.

But what was that filament dangling out of its mouth?

Yep, when we opened up the walleye’s mouth to check, there was Theo’s lure firmly embedded, deeply down its throat. The walleye had struck Theo’s lure first, had its head snapped back, broke the line on a weak spot, and then swam immediately over to Jordan’s offering and inhaled it, as well, for good measure.

This is the reason why, whenever I miss a fish—especially in the open water season when I’m throwing surface baits—I never reel the lure in quickly to make another cast. Instead, I always envisage the fish sitting below it, getting ready to come back and strike it a second time.

Indeed, with fish like walleye, that feed so heavily on spiny rayed fish like yellow perch, I never reel up my lure to check it after I miss a fish. Think about how many times a walleye, over the course of a season or two, swallows a perch that, at the very last minute, flairs its sharp dorsal fin in self defence. To the walleye, the sharp needle-like sting in the throat is just an occupational hazard.

Which is why, and how it came to pass that Jordan and Theo both hooked the very same walleye of a lifetime on the weekend.

Like I said, you can’t make up this stuff.