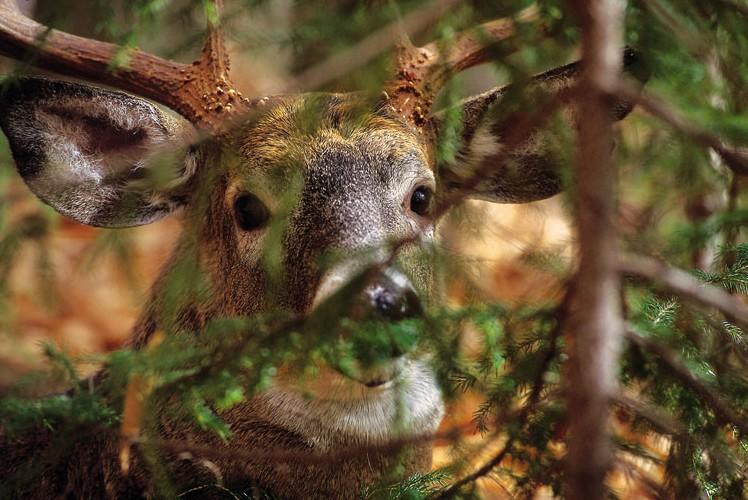 How to find big bucks under any weather conditions

Want to harvest a mature buck this fall? Then check the weather. In fact, a look at the forecast should be your first step in planning every hunt. What direction is the wind blowing? How strong is it? Is the barometer rising or falling? Is it going to rain? All these questions and more need to be answered before you lace up your boots. The reason? With the exception of does in heat and excessive hunter pressure, nothing influences buck behaviour as quickly as changes in the weather. That’s why consistently successful deer hunters pay close attention to both short- and long-range forecasts-and adjust their strategies accordingly to stay one step ahead of their quarry. Here’s how.

When it comes to typical deer activity, sunny days with bluebird skies and high barometric pressure set the norm. On these fair-weather days, expect deer to follow a predictable routine: feed at dawn; bed down in a secure area through mid-morning, resting while chewing cud from their early-morning foraging; browse a little or visit a hidden stream or pond for a drink around midday; and rest a few more hours during the early afternoon, leading up to the evening feeding period.

On dry days like these, still-hunting, or stalking, is usually out of the question because of the crunchy leaves and twigs underfoot. Instead, take up watch from a treestand or ground blind along a game trail in the early morning or evening. This can prove to be very successful, especially during the pre- and post-rut, when daily movement patterns and preferred feeding areas are more predictable. The best trails to watch lead from a secret bedding area-a stand of conifers, low-lying thicket or south-facing hardwood ridge-to a known feeding area, such as an abandoned apple orchard, or a field of clover, corn or alfalfa. This pattern stays much the same on fair-weather days throughout the year. The only exception is during the rut, when bucks are constantly searching for receptive females, making it impossible to predict their daily routines.

Nothing can foil or shut down a whitetail hunt as quickly as the wind, making it the main factor to consider. If you know where the deer are likely to approach from, rule number one is to always hunt them from downwind. Otherwise, you’re just wasting your time. The risk of revealing your scent notwithstanding, wind has a huge effect on whitetail behaviour and movement patterns. High winds make deer nervous, even jumpy, since both their hearing and sense of smell are basically shut down—as long as, of course, you remain downwind. So to avoid being preyed upon by hunters, wolves or coyotes, deer will move around less, sticking closer to thick, protective cover and avoiding open areas such as fields.

Hunting on windy days can be limiting, unless you know where the deer prefer to hide out. One of the best places to find deer on windy days is a low-lying area that is heavily forested or thick with brambles. Both the lower elevation and the dense cover act as windbreaks, giving the deer a greater sense of security. You can often find such locations where streams meander through fields or forests. It’s best to scout out these areas before hunting season, then set up a treestand or ground blind that you can sneak into on windy days once the season begins. That’s one of my preferred strategies. Another excellent tactic is to slowly—make that, very slowly—still-hunt along the downwind side of these areas while carefully watching for hidden or bedded deer.

If you’re hunting with more than one person, meanwhile, a drive can also be successful (it’s effective after a snowstorm, too). Have one hunter quietly set up watch at the downwind side of the low-lying, heavily covered area, while the other hunter—the driver—walks around to the far side, upwind from the deer. Wearing plenty of blaze orange, the driver then zigzags his way toward the positioned hunter, making lots of noise along the way. Between the noise and the human odour, the deer will likely spook and try to escape on the far side. The downwind hunter may then have a chance for a shot once the deer is past him and into more open terrain. The driver, meanwhile, should remain on his toes-there’s a chance the deer will try to quietly circle back around him, attempting to remain in the dense cover.

While photographing and hunting whitetails over the years, I’ve noticed that deer become very active whenever a low-pressure system quickly moves in, displacing a high-pressure system. Deer can clearly sense this sharp drop in barometric pressure, which usually means a storm is coming within the next few hours. Anticipating the bad weather, deer will actively feed to fill their bellies before heading for cover and bedding down to wait out the storm.

Of all the weather conditions a hunter can hope for, an approaching storm is the best. Whenever I know that a low-pressure system is going to quickly move in, I do everything I can to make sure I’m afield and in my stand during those few hours leading up to and throughout the weather change. This is definitely the time to cash in those overtime hours at work—hunting when such a significant drop in the barometer occurs greatly increases the odds of seeing deer. A good plan is to sneak out to a favourite, secluded deer feeding area, preferably a few hours or more before the barometer starts to plummet, and settle yourself into a ground blind or treestand. Deer are so acutely aware of their environment-and can sense impending weather changes so accurately-that they’ll have the urge to feed hours before a storm even hits. This leads to bolder than normal movement, with the foraging increasing steadily until the bad weather and wind drives the deer to the shelter of the thicker woods. But by then, hopefully, you’ll already have your buck.

Light to moderate rain has little effect on deer. On drizzly or rainy days, they simply go about their business in the same manner as they would on sunny days; their feeding and movement patterns remain unchanged. If it’s raining heavily or there’s a thunderstorm, however, deer will bed down in a sheltered area. This type of rainy weather typically adds high winds to the equation, which also discourages their movement.

Since deer activity isn’t altered by light rain, the dedicated, properly dressed hunter can find such weather rewarding. I know of many successful hunters who swear by rainy days—some have even taken their biggest bucks in the drizzle. One reason is there are fewer hunters afield to spook the deer, giving mature bucks the confidence to move around more than they would on dry days (assuming it’s not also windy). And the wet ground, combined with the pitter-patter of the rain, serves to muffle noise, making it easier for hunters to still-hunt or get into position undetected. Rain also helps mask human scent by pulling the odour to the ground instead of it blowing downwind. A final tip: whenever I hang a new treestand or build a ground blind, I make sure to include a roof—or at least a tree-mounted camo umbrella—so that I can stay dry and comfortable on rainy days.

The most marked change in deer behaviour and movement happens during and after a heavy snowfall. Deer know when a big dump is coming—we can usually tell, too, by that cold, damp feeling in the air and the oppressive wall of dark cloud consuming the sky. And by the time the heavy flakes start to fall, most deer will have fed and headed for the thickest cover in the woods. This is virtually always a dense stand of evergreens—groves of pine, hemlock or cedar that occupy at least a couple of acres. When there’s more than six inches of snowfall, whitetails will typically stay put in their secure bedding area for a day or more. After a long snowstorm, in fact, it can seem as if the deer have vanished—there’s simply no sign of them. I remember one gun season when my cousin Jeff remarked he’d seen neither hide nor hair of a deer following a heavy snowfall. So to try to find some sign, he elected to go for a walk in the almost knee-deep powder. After more than an hour of tough hiking and finding nothing, he reached a wall of young, 10-foot-tall pines. Rather than skirt around the trees, Jeff ducked in under the boughs and promptly saw more flashes of brown hair and white tails than he could count. Turns out the deer had grouped together under the shelter of the thick pines and, as deer do, had stayed put, even after the storm had cleared.

Once the snow is several inches deep, deer will choose the path of least resistance in order to conserve energy. With that in mind, an excellent strategy after a snowstorm is to create man-made paths, or runways, particularly along the edges of dense stands of conifers. You can do this by tramping down the snow on foot or, in some cases, snow­mobiling (although walking will create less of a disturbance). Ideally, the path will wind past the deer bedding area to a feeding area, with your stand in between. Chances are, the deer will opt for your cleared, packed trail instead of making their own—especially if it leads to where they want to go. More than once, I’ve heard the story of a hunter heading out to his watch through a blanket of fresh snow, only to later discover on his way back to camp that a deer had walked in his footprints. If there’s been a good crop of acorns or beechnuts, it’s also a good idea to clear away a patch of snow under a mature oak or beech along your man-made trail. The deer will then likely find this new resource and feed on it for a few days or so—giving you yet one more opportunity to harvest that big buck.