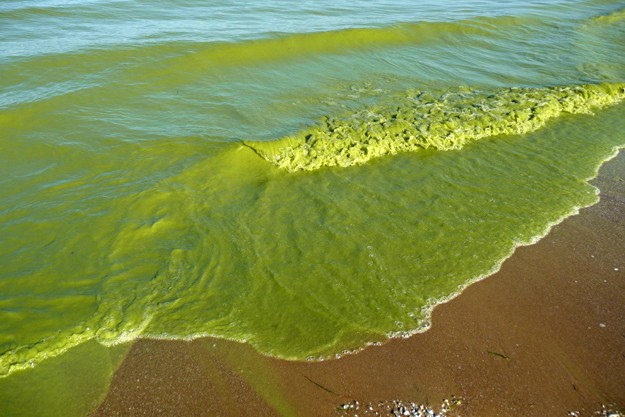 What you need to know about Lake Erie’s algal blooms

Two summers ago, a massive blanket of toxic algae appeared in the western basin of Lake Erie, fouling boats, killing fish and washing ashore in stomach-turning green waves. Within months, it covered almost 5,000 square kilometres—one-fifth of the Great Lake’s surface. A new report from the Carnegie Institution for Science has identified the causes of the algal bloom, and the news is not good for one of Canada’s top walleye, bass and steelhead waters. Indeed, at press time another giant bloom was expected for this summer.

What is an algal bloom? Some types of algae are beneficial to the aquatic food web, but not blooms resulting from the extreme growth of algae in environmentally stressed systems. In freshwater, most blooms are caused by cyanobacteria—commonly known as blue-green algae—which seriously degrade water quality. In recent years, Manitoba’s Lake Winnipeg has also endured giant algal blooms.

What is the effect? Along with a bad smell, blooms create a muddy or musty taste in fish. They can also produce potent toxins harmful to the human nervous system, as well as to the skin and liver. Additionally, as masses of dead algae sink to the lakebed, the decomposition consumes much of the available oxygen. This forms vast dead zones where most aquatic organisms cannot survive, killing or displacing fish, driving cold-water species up into warmer water, and disrupting feeding and spawning patterns.

What caused Erie’s bloom? In 2011, a wet spring, including several extremely intense rainstorms, washed record levels of phosphorus-rich fertilizer into the lake’s shallow western basin. The phosphorus primarily entered Erie via the Maumee River, a major tributary draining a massive agricultural region of Ohio. Then early summer saw little rainfall and unusually weak wind and current patterns. So rather than being washed down the lake, the fertilizer remained in Erie’s western basin and fuelled the rampant algal growth.

Can it happen again? Yes. The report concludes that large spring storms are part of a long-term trend that’s projected to get worse due to climate change. And for the past decade, much of the farmland drained by the Maumee has been planted using no-till methods to prevent soil erosion. That means seeds are pushed into unploughed ground and fertilizer is spread on the surface in pellet form, making it easier for rain to wash the fertilizer into the watershed. The trend toward fertilizing in autumn also increases phosphorous runoff.

What can be done? Aside from halting and reversing climate change, which will require massive global action, phosphorus levels must be reduced by implementing different fertilizing techniques. And since phosphate-based fertilizer is most heavily applied on corn, scientists also suggest rethinking the current emphasis on growing corn for ethanol production. Ultimately, the key is to implement a scientifically guided management plan for the region. So says the report’s lead author, Anna Michalak, a Canadian scientist in the Department of Global Ecology at the Carnegie Institution. Otherwise, she says, expect to see more huge algal blooms.